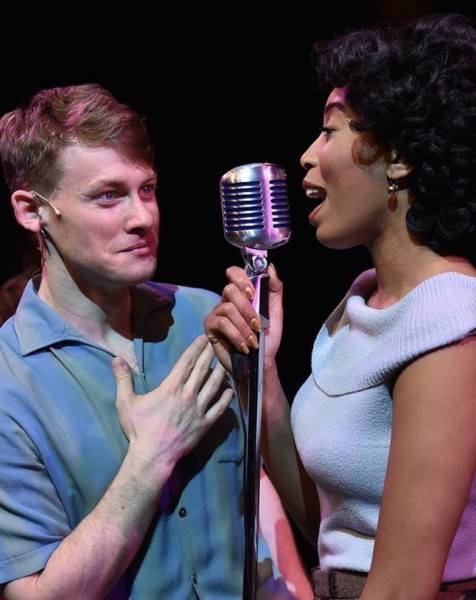 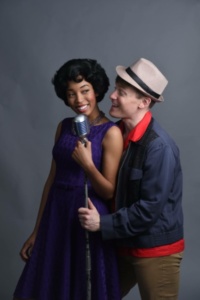 Every so often I get the opportunity to review something truly unique. Porchlight Theatre’s Memphis is a truly special gem. I attended late in the show’s run, but felt compelled to still sing its praises. This four time Tony Award-winning 2010 musical about a white radio DJ who wants to change the world by integrating black music on pop radio is just  as poignant today as it is in its 1950’s setting. Director Daryl Brooks once again teams with leading lady Aeriel Williams to craft something truly magical. Their previous collaboration, The Black Pearl: The Story of Josephine Baker, one of the best productions ever staged at the Black Ensemble Theater,  won them both critical praise and several local award nominations, including a Black Excellence Award for Best Director. Lightening has definitely struck twice for this talented twosome. 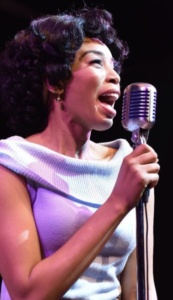 This inspired by a true story tale really finds its footing when focusing on the forbidden love story between the DJ and Chanteuse. Felicia Farrell (Aeriel Williams) is a beautiful and talented  black nightclub singer attracted to self described “red neck” retail clerk/radio personality, Huey Calhoun (Liam Quealy). Bringing “race music” to a largely young and white audience, Calhoun quickly becomes the hottest thing on the dial. Think the Dick Clark or Ryan Seacrest of his day, but with a serious twang. Meeting after a chance encounter at Delray’s Underground Nightclub, the couple face disapproving reactions from both sides. Aeriel’s brother Delray Jones (Lorenzo Rush, Jr. Chicago’s version of the velvet voiced Luther Vandross) and Huey’s waitress mother, Gladys Calhoun (Nancy Wagner) are both no where near on board for this couple getting together. Just a word of warning, there is a disturbing scene of violence depicted as a group of young white thugs attack the young couple, that is purposely jarring. Casiena Raether’s fight choreography is effectively haunting, currently reflected almost weekly on the national news in Trump’s contemporary America. Equally disturbing and senseless in both venues. 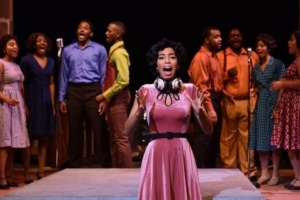 Before you get the idea this show is all politics, it truly isn’t. The book and lyrics were written by Bon Jovi keyboardist Joe DiPietro, and the athletic and enthusiastic choreography by Christopher Carter and Reneisha Jenkins had the audience almost dancing in the isles. Porchlight’s Musical Directer Jermaine Hill was also clearly having a ball. If I may single out three more individual performers, Gilbert Domally’s  Gator is the grounding heart and soulful voice standout of the cast. James Earl Jones, II continues his legacy of stealing every scene  he is in, literally cartwheeling during his act two “Big Daddy” solo and as Wailin’ Joe, Stephen “Blu” Allen distinguished himself as both powerful singer and bold dancer. He is young, but with a resume that includes The Scottsboro Boys, Jesus Christ Superstar, Five Guys Named Moe and Violet, he is a bright and bold new talent clearly and quickly going places. The Gospel flavored, passionately sung pieces prove both heartbreaking and affecting. From “Everybody Wants to be Black on Saturday Night” to “Stand Up” and “Change Don’t Come Easy” Memphis is adrenalized activism through song significantly deeper in soul and story telling than the more popular, Hairspray the musical. My only legitimate complaint, the show ran out of steam by the usually high stepping closing number “Steal Your Rock’N’Roll.” Unfortunately the cast was reduced to pedestrian show choir antics, several steps below what had been displayed during the previous 90 minutes of music and dance. 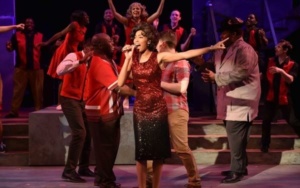 The remainder of the creative team included scenic design Jacqueline Penrod and Richard Penrod, costuming by Bill Morey, Denise Karczewski’s lighting and sound design by Robert Hornbostel. With a powerful score, a troupe of spirited and capable vocal talent and solid dancers, it is understandable how this rendition of Memphis has extended its run twice. Porchlight Theatre has an unmitigated hit on its hands. Everyone say “Hockadoo!” before Memphis has to hightail it off the Ruth Page Center for the Arts’ stage. You will be improved and inspired by the proceedings. 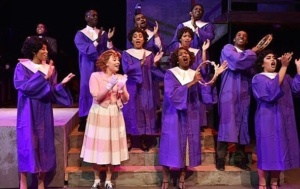 RossOctober 21, 2021
Read More
Scroll for more
Tap
Opening Night At Desperate Measures: The Curtain Call
Meet The Playwrights of NY SummerFest: Michaela Vivona a Musical Writer Who Gives Back With Her Shows