Men on Boats Takes Acting and Direction Up A Notch

Men on Boats Takes Acting and Direction Up A Notch 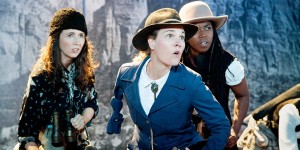 Jaclyn Backhaus’s Men on Boats is performed by one of the most exquisite ensembles of actresses and directed with such aplomb by Will Davis. This uproariously funny and completely delightful historical dramedy is a summertime must. This joint venture is by Clubbed Thumb and Playwrights Horizons. 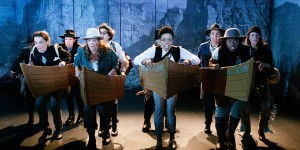 Wooden wedges make-up the four boats of the 1869 expedition of the Grand Canyon which are projected all around the stage. Here we meet Major John Wesley Powell (a perfect Kelly McAndrew), who is self assured despite being a one-armed explorer. With words like “Left! Keep left! Rocks! Rocks, more Rocks, line!” we shoot the rapids and the dangerous journey that seems impossible. Based on Powell’s published journals of his historic expedition, sanctioned by the U.S. government, to chart the course of the Colorado we are immersed into the men who lived and died just to say they were there. Here they name the craggy mountains and passes after themselves and others. Coffee, tobacco and bacon become precious commodities that bring out the best and the worse in these brave men. 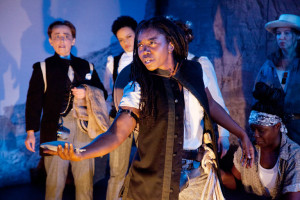 The ensemble consists of Elizabeth Kenny as Old Shady, Powell’s older brother and a Civil War vet. Hunter and trapper William Dunn, who wants to be in charge and forge a legacy is played with scrappy wit by Kristen Sieh. Hannah Caball has some nice moments as OG Howland whose interest in science and map making does the group proud, as well as the dead pan Indian settler. As the  mysterious trapper John Colton Sumner, Donnetta Lavinia Grays has the right stuff. Not to be forgotten are Jocelyn Bioh, Danielle Davenport, Birgit Huppuch, and Layla Khoushnoudi, who, all give layered open portrayals.

Backhaus’s writing is vivid, perfectly paced, melancholy and hopeful. By the end of this play we went on this journey and felt for each of these men. As tempers are tested, camaraderie played out and sanity on the verge of a melt down we root for these hearty adventurers.

Davis’s staging are is flawless. Like Marianne Elliot he is creative and is breaking new ground. Asta Bennie Hosteler’s costumes are seriously a work of art. Part old west and a little contemporary flare I seriously wanted those buckskin leggings Dunn wears. Solomon Weisbard’s intimate lighting evoked the colors of the canyon, Jane Shaw’s sound design put us deep into the pits of the Colorado river.

The days of adventuree may be but a distant memory but Men on Boats keeps it alive.