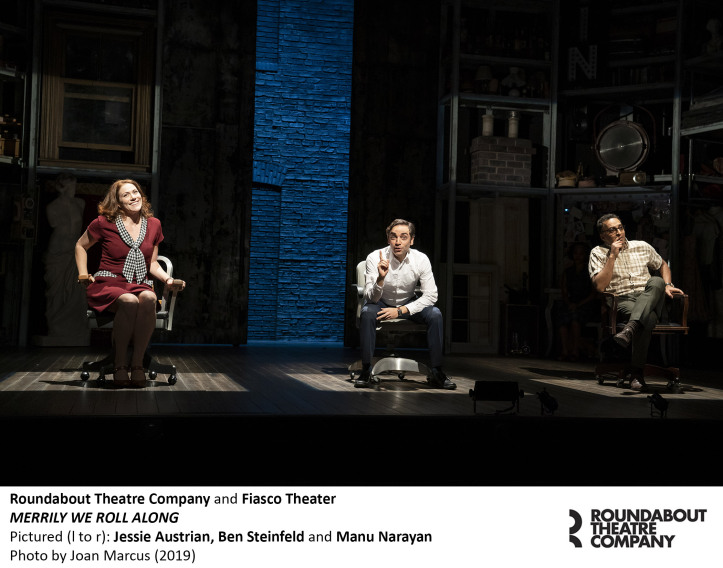 Stephen Sondheim and George Furth’s musical, Merrily We Roll Along is one of those legendary shows that theatre people are in constant awe of, including me. It dares to try something different by skewing the linear format with a reverse twist, confusing many, or intriguing a certain few. It starts with the ending, and ends with the start, and what is at the beating heart core is friendship; warts, martinis, and all. It premiered back on Broadway in 1981 and quickly closed after only a measly 16 performances and 52 previews. It keeps trying to find it’s perfect incarnation and soul mate, as the music, or at least some of the songs, are true blue Sondheim, complicated but exciting, digging in to interpersonal dynamics with a bravery and audacity that is powerfully intoxicating.  Should the actors be older, and then play younger later on? Or should it be the other way around? Does one add intensity and depth? Or the other wide-eyed naiveté? These questions seem to swirl around the piece, with no one ever really figuring out the answer definitively. I’ve seen a couple of attempts. The one in 2012 at NYCC Encores!starring Lin Manuel Miranda (Charley), Celia Keenan-Bolger (Mary), and Colin Donnell (Franklin) was my first real experience of this complex show. I loved the confusion, and embraced the sentimentality and passion.  That production was followed close by London’s Menier Chocolate Factory‘s West End transfer in 2013 starring the glorious and delicious Jenna Russell, Mark Umbers, and Damian Humbley. It was a delight that went on to win the Peter Hepple Award for Best Musical at the Critics’ Circle Theatre Awards. That one felt pretty darn close to perfect, or at least the best I had seen.

This time around, the musical is setting up shop in what appears to be a prop and costume storage room, beautifully created by set designer Derek McLane (upcoming Broadway’s Moulin Rouge!), with strobe-induced flashback lighting by Christopher Akerlind (Broadway’s Indecent) doing a wonderful job with back stepping, and a solid sound design by Peter Hylaenski (Broadway’s Frozen) on the off Broadway stage of the Roundabout Theatre Company. With Roundabout behind them, Fiasco Theater is giving it their best shot, attempting to find the true heart and pacing of Merrily. It’s a daunting task, as this particular show has always been called “problematic” by critics and theatre goers alike, with themes that, many have said (not me), leave “a sour taste in their mouths“. But with a strong assist from the man who brought us other intricate and knotty shows like Road Show and Assassins, Sondheim with the Fiasco team have attempted to tighten up the material, treating the piece like a new show in development, putting the old Fiasco spin on it, much like they did back in 2015 with the gloriously digestible Into the Woods.

Can their magical mystery formula work again? In the end, it all comes down to the snipping vision of director Noah Brody (CSC’s Twelfth Night) and choreographer Lorin Latarro (Broadway’s Waitress), who have taken their creative scissors to Merrily, editing and cutting the show down to a one act musical. The question that remains is did they find the key to its success or have they tampered with a difficult but brilliant show leaving it just as troublesome as it was before, but maybe for different reasons? I’m going with the second, sadly.

With a strong orchestration and new arrangement by music director, Alexander Gemignani (Broadway’s Carousel) who leads the diminutive but dynamic 8 piece orchestra with  music coordinating by Meg Zervoulis (Broadway’s Mean Girls), the show sounds great, and the costumes by Paloma Young (Broadway’s Natasha, Pierre…) do the trick without overpowering us with its time frame. But the tightening has cost the show a bit of its connect-ability, forcing the highs and lows of emotionality to come too quickly side by side, by side, by side.  They flip back and forth like a light switch, turning on and off between love and hate, without any graduation. Stuffed within each scene, the subtlety has been chopped away, leaving an emotional rollercoaster of extremes, a wild ride to be ridden by a cast of characters who are pretty well attuned actors, but ones with weaker than required voices.

The most dynamic of the three is Mary, played with a strong sense of purpose and power by Jessie Austrian (Fiasco’s The Importance of Being Earnest), who reminded me of Elaine Stritch who could always find the delicate rhythms of emotionality within any Sondheim’s lyrics. Austrian sends these spirits out to the world with, maybe not the strongest of voices, but a demanding determination to be understood. She sells each and every word, making her the main focal point, even when the edited version doesn’t really give her the gusto she deserves. The two men in her life, piano-playing Frank, portrayed with a good balance by Ben Steinfeld (Fiasco’s Cyrano de Bergerac) and lyricist/writer Charley, played with a punch by Manu Narayan (Broadway’s My Fair Lady) work well together, merrily rolling along with the others; Brittany Bradford (Broadway’s Bernhardt/Hamlet) inhabiting numerous parts, but most importantly the role of Frank’s first wife, Beth; the regale Emily Young (Broadway’s Bloody Bloody…) donning the difficult-to-like Gussie and other characters with a bit less success; and Paul L. Coffey (TFANA’s Cymbeline) playing, among others, Gussie’s sad sack of a husband, Joe. It’s a creative and sometimes too cartoonish creation, plopping on an assortment of silly hats and glasses to separate themselves from previous roles.  Beth’s parents are a bit hard to take-in caricatures, right up there with the excited fans seeking an autograph from the Broadway star Gussie.

It’s mostly a whole lot of fun, especially for the repeat visitor. It’s easy to follow if you know the set up, but I wonder about the uninitiated. The ending that is the beginning seems all too familiar with the three creating a life-long bond on a roof top without giving us the reason or the heartfelt why. The other longer incarnations, with two acts and more dialogue, ends that starting scene with a more telling and emotionally powerful snapping together of the ties that bind these three, but here in the shortened scene, it feels rushed and not overly dynamically convincing.  The killer songs are performed with passion but not so much power. Beth’s “Not A Day Goes By” flies too fast across the stage grabbing hold only when Austrian’s Mary latches on to it, but “Old Friends” and the title song, “Merrily We Roll Along” sound as good as ever. The Fiasco troupe finds unity in the harmony of six, but in the interpersonal dynamics of twos and most importantly threes, Merrily struggles to sustain, giving us a feeling of friendship, but one that isn’t so deep, meaningful, long-lasting, or strong.