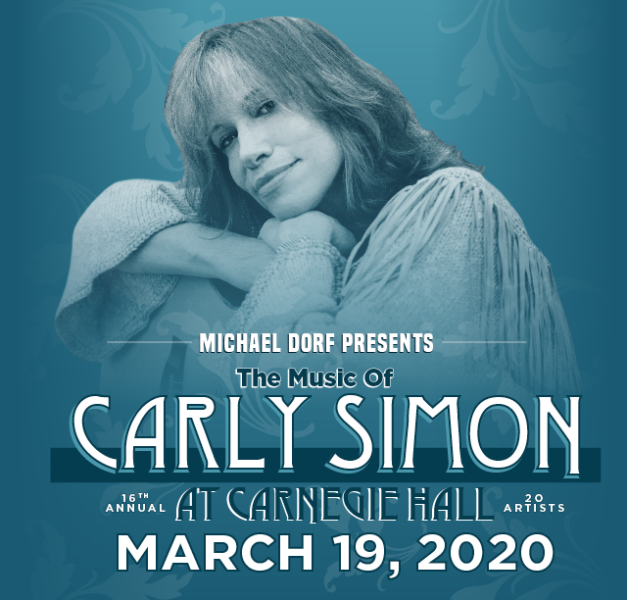 The Carnegie concert, on March 19, 2020, will feature twenty artists each performing a song from the vast catalogue of this prolific singer-songwriter who has amassed 24 chart toping singles, 2 Grammy Awards, an Academy Award, Golden Globe Award, and numerous other honors.

Producer Michael Dorf said, “This year’s tribute will be very special given the involvement of Carly herself.  We are very lucky to have her helping us connect with her friends and help shape what will be one of the greatest nights of music in NYC. “

“I’m so proud to be involved with bringing music into the lives of underprivileged children, it’s a tribute to them.  I will be singing along with all of the exceptional performers who have given their time.  If it’s only in the rehearsals, I’m going to be footloose in the aisles.” said Carly Simon.

Previous tributes have included The Music of Prince, Bob Dylan, Joni Mitchell, the Rolling Stones, Aretha Franklin, Van Morrison, REM, David Byrne, etc.  Every year, the tributes have sold out and contribute 100% of the net proceeds, or approximately $100,000, from the evening to the following non-profit organizations:  Little Kids Rock, Young Audiences NY, FIXS, Church Street School of Music, The Center for Arts Education, D’Addario Foundation, Sonic Arts for All, Save the Music, Midori & Friends, Grammy in the Schools, the Orchestra Now and the Newport Jazz Kids.

Tickets are on sale today at Carnegie Hall for all sections at www.musicof.org/carlysimon.

Michael Dorf Presents was established in 2003. Dorf is the founder of the Knitting Factory and City Winery, MDP. He has been presenting this series at Carnegie Hall for 16 years.  Working alongside Michael for the last 11 years has been Shlomo Lipetz, Vice President of Programming at City Winery.