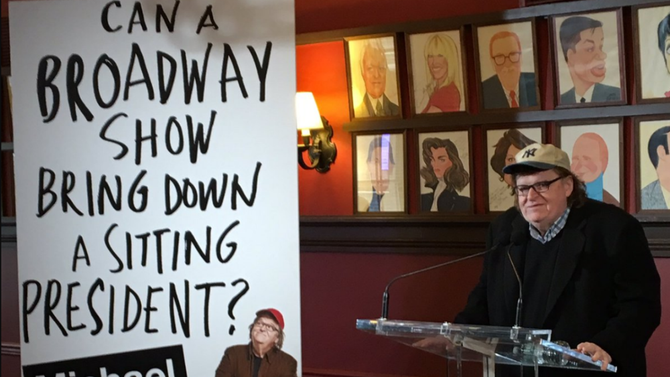 Michael Moore Is Coming To Broadway

Michael Moore Is Coming To Broadway 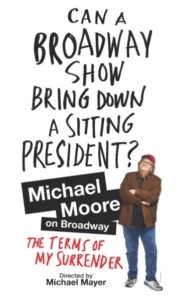 “Can a Broadway show take down a sitting President?”

“I think what the world needs right now is Michael Moore standing on a Broadway stage sharing his hilarious stories and incendiary political perspective, creating the kind of dialogue that can only happen in the theater,” said director Michael Mayer.

In a time like no other in American history, and with a sense of urgency like never-before, Michael Moore comes to Broadway for the first time in an exhilarating, subversive one-man show guaranteed to take audiences on a ride through the United States of Insanity, explaining once and for all how the f*** we got here, and where best to dine before crossing with the Von Trapp family over the Canadian border.

Performed live each night just blocks from Trump Tower, The Terms of My Surrender will, like Moore’s films, feature the wry, satirical humor of one of America’s iconic political observers and all-around-shit-disturbers, a fearless Midwesterner not interested in taking any prisoners. Audiences are in for one surprise after another.

Michael Moore is an Academy Award-winning documentary filmmaker, Emmy Award-winning television creator, and best-selling author. He is the writer and director of Fahrenheit 9/11, a devastating look at the presidency of George W. Bush and the War on Terror. It is the highest-grossing documentary of all time. His film Bowling for Columbine, which examines the violent nature of gun-toting Americans, won the Academy Award for Best Documentary. His Oscar nominated Sicko examined the health care crisis in the United States and helped to ignite the movement toward universal health care. His genre-busting first film, Roger & Me, was named by NPR as one of the top ten movies of the decade. He created the award-winning and ground-breaking television series “TV Nation” and “The Awful Truth,” both of them satirical TV newsmagazines which took on the powers-that-be. Each of Moore’s eight books have made the bestseller list, with “Stupid White Men” being one of the largest selling nonfiction books of the last decade. Moore’s works have examined, both with scathing humor and painful facts, topics such as globalization, corporate America, capitalism and whoever the sitting President happens to be. He is the winner of the John Steinbeck Award, the British Book of the Year Award, and the Palme d’Or at the Cannes Film Festival. In 2005, Time Magazine named Moore “one of the world’s 100 Most Influential People.

Tickets for The Terms of My Surrender are $29 – $149 and are available, beginning today, at Telecharge.com or by calling (212) 239-6200. During previews, performances are Monday – Saturday at 8 PM, Wednesdays and Saturdays at 2 PM (no matinee on 8/2/17). Regular performances are Tuesday – Thursday at 7 PM, Friday – Saturday at 8 PM, with 2 PM matinees on Wednesdays, Saturdays and Sundays.