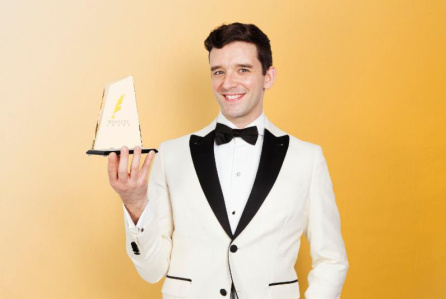 Nominations for The 64th Annual Drama Desk Awards will be announced onThursday, April 25th. The Drama Desk Awards are the only major theater honors for which productions on Broadway, Off-Broadway, and Off-Off Broadway compete against each other in the same categories.  “I’ll certainly be more chill hosting the Drama Desks for a fourth time,” said Michael Urie. “In fact, this year I’m going to introduce myself to Glenda Jackson!” In a joint statement, Drama Desk co-presidents Charles Wright and David Barboursaid: “The Board of the Drama Desk is delighted to welcome Michael Urie for his fourth stint as host of the Awards ceremony. Michael’s charm, spirited stage presence, and distinctive sense of humor guarantee that this will be an evening of fun and surprises. A Drama Desk recipient himself, Michael is the ideal ambassador for our organization and the Awards, both in the theater community and beyond.”

Matt Britten, Broadway Brands CEO, will serve as executive producer and Joey Parnes Productions will produce the ceremony, as it has since 2012. The show will be written by Bill Rosenfield (46 Beacon, True Fans, Sunshine and Shadow), returning for his seventh year; directed by Mark Waldrop (Not That Jewish, Howard Crabtree’s When Pigs Fly, Bea Arthur on Broadway: Just Between Friends), marking his fourth year; and music-directed by Dan Lipton (The Band’s Visit, The Last Ship), making his fifth appearance.

The mission of the Drama Desk is to recognize outstanding achievement in New York theater and encourage discussion of issues significant to theater professionals. The organization accomplishes these goals by bestowing annual awards in more than 30 categories of theater arts and crafts, hosting the awards celebration, and presenting educational forums and panel discussions on theater topics. The Drama Desk was founded in 1949 by New York Times arts reporter Sam Zolotow, Edith Oliver of The New Yorker, and New York Post critic Vernon Rice, among others. Six years later, after Rice’s untimely death, the organization initiated an award in his honor for outstanding achievement Off-Broadway. Subsequently expanded and renamed the Drama Desk Awards, they now recognize accomplishments on Broadway, Off-Broadway, and Off-Off Broadway.

Brands Based in the heart of Times Square, Broadway Brands (www.broadwaybrands.com) is a theater media conglomerate that seeks to build creative, informative, and inspiring products for a variety of audiences on Broadway and beyond. The company made its debut in 2015 with the launch of Broadway Briefing, and recently launched Broadway News, with more brands on the way.  Broadway Briefing (www.broadwaybriefing.com) is a fun, fast (and free) must-read morning newsletter for theater professionals. Broadway News (www.broadway.news) is the new home for original theater journalism from editor-in-chief Caitlin Huston, with reviews by Charles Isherwood and Elizabeth Bradley, and featuring contributions from experienced theater journalists including Jeremy Gerard, Gordon Cox, Jan Simpson, and David Cote.  Broadway Brands is building a community of entertainment entrepreneurs, with a passion for taking show business seriously. It celebrates the history of the industry and is even more excited for its future.

Led by Joey Parnes, a Broadway producer and general manager with over 40 years’ experience, Joey Parnes Productions produces, executive produces, and general manages theatrical productions from the commercial and non-profit worlds, both on and off Broadway, internationally and on the road. Currently represented on Broadway by To Kill A Mockingbird, King Lear, Hillary and Clinton and Gary: A Sequel to Titus Andronicus and on the road with the Tony Award winning Hello, Dolly! Recent Broadway credits include The Waverly Gallery, Meteor Shower, Three Tall Women, The Iceman Cometh (2018), Carousel (2018), Hello, Dolly! (2017; Tony Award), 1984, A Doll’s House, Part 2, The Glass Menagerie (2017), The Front Page (2016), Shuffle Along, The Crucible (2016), Bright Star, Blackbird, The Humans (Tony Award), A View from the Bridge (2015), Fish in the Dark, Skylight (2015; Tony Award), A Delicate Balance, This Is Our Youth, A Raisin In The Sun (2014; Tony Award), A Gentleman’s Guide to Love and Murder (Tony Award), Betrayal (2013), Vanya and Sonya and Masha and Spike (Tony Award), and the revival of HAIR (2011; Tony Award). Joey is a past president of the Yale Dramatic Association and teaches Producing for the Commercial Theatre at Yale School of Drama. Joey served as the Coordinating Producer of the Tony Awards from 2001 to 2008 and has produced the Drama Desk Awards since 2012.

Suzanna BowlingJune 22, 2022
Read More
Scroll for more
Tap
A Miracle In Rwanda Is Remembered on the 25th Anniversary of the 1994 Genocide
Abingdon Theatre Company Brings Star-studded One Night Only Reading of Steel Magnolias to The Stage