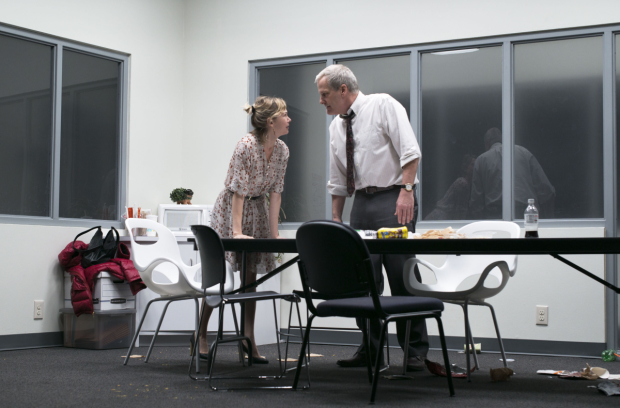 Michele Williams and Jeff Daniels are Exposed in Blackbird

Michele Williams and Jeff Daniels are Exposed in Blackbird 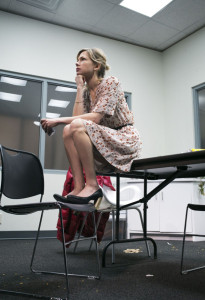 Take these broken wings and learn to fly

You were only waiting for this moment to arise.

Take these sunken eyes and learn to see

You were only waiting for this moment to be free.

Into the light of the dark black night. 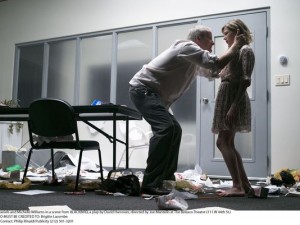 I saw David Harrower’s Blackbird, a couple of days ago, but it has taken me awhile to write this review. This drama, which was seen last year stars Jeff Daniels in the role he created and adds the terrifyingly emotional wreckage of Michele Williams. What happens here is hard to take, painful, realistic and full of raw emotions. The audience becomes uncomfortably voyeuristic at this encounter as we watch these actors strip down their defenses until they are shakenly naked. You almost feel sorry for the actors, as they take their bows.

The play follows Una (Ms. Williams) now 27 as she accosts Ray (Mr. Daniels) who is now 55. At first it seems as if he is a husband who has abandoned his wife, but it turns out the secret is much more complicated. When Una was 12, she became romantically and sexually involved with Ray. It has been the 15 years since they last saw each other. Una has confronted him after seeing his picture in a trade magazine and has tracked Ray down.

We learn that the two first met at a barbecue in her parents’ backyard. She pursued him, but he did not stop her, he encouraged her. When they ran away together, she reveals how she felt. As she does Una sounds no more than 12 and we realize she is hopelessly frozen in time. She will never, live past this moment. She has been stuck in this same town with these same emotions as Ray has escaped. After prison he has starting his life over with a new name, a new women, in a new town.

Michele Williams loses herself in the role. She seems locked in both the past and the present, until the end when you wonder if she has not lost it completely to drown in her want. As Ray, Mr. Daniels is that quite psychopath, who even in the end, we do not know who this man really is.

Joe Mantello, directs this play so that it cripples our misperceptions, taunts us with what is abuse and leaves us like Una trapped in the wondering.

Mr. Harrower inhabits his characters so completely and his dialogue is piercingly honest.

What is so hard about this story is despite the ages and the circumstance this is a tragic, horrible love story that has destroys lives. Many who have been abused will not find this comforting. They do not fall in love with their abuser, however they do become trapped in the memories that never leave. What most people do not understand about violating a child is that they destroy their boundaries and when they abandon them they become forever trapped in those memories. Not even a shrink can erase that.

Take these broken wings and learn to fly

You were only waiting for this moment to arise

This is the most powerful play of the season.