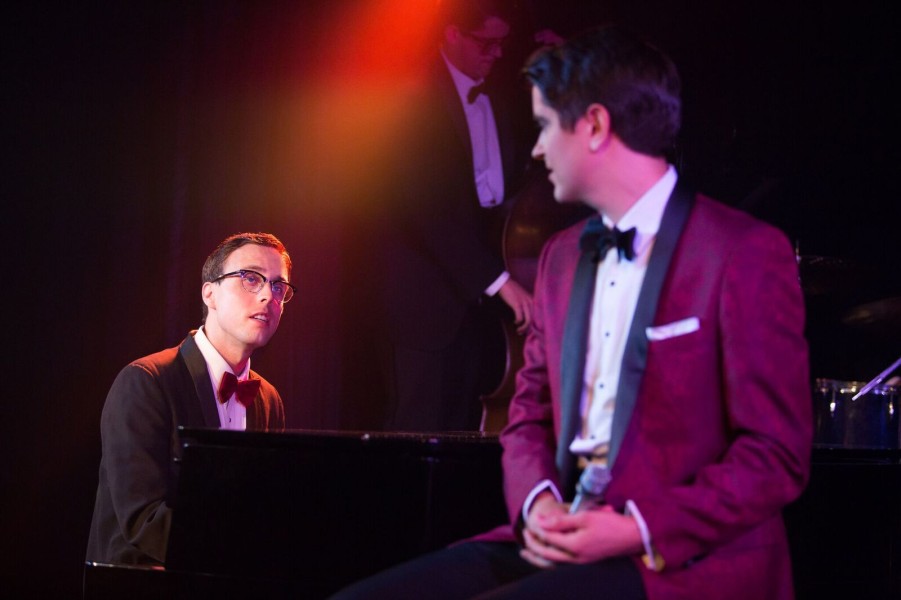 The York Theatre Company (James Morgan, Producing Artistic Director; Evans Haile, Executive Director), dedicated to the development of new musicals and rediscovery of musical gems from the past, has announced the line-up for its 49th anniversary season at The York Theatre at Saint Peter’s (619 Lexington Avenue, entrance on East 54th Street, just east of Lexington Avenue).

Launching the 2018-2019 season is the first Mainstage production, the Off-Broadway premiere of the acclaimed new musical Midnight at the Never Get, with book, music, and lyrics by Mark Sonnenblick, co-conceived by Sam Bolen, and presented by arrangement with Visceral Entertainment and Mark Cortale Productions.  Max Friedman is set to direct.  Cast will be announced shortly.  Performances are set to begin Tuesday, October 2, 2018 for a limited engagement through Sunday afternoon, November 4, 2018 at The York Theatre Company at Saint Peter’s (entrance on East 54th Street, just east of Lexington Avenue). Opening Night is set for Thursday evening, October 11, 2018 at 6:45 p.m.

A brand new musical by York NEO writer and 2018 Jonathan Larson Award winner Mark Sonnenblick, Midnight tells the story of singer Trevor Copeland and songwriter Arthur Brightman who have the perfect New York romance, and that’s swell. In 1965, it’s also against the law. So in the back room of The Never Get, an illegal Greenwich Village gay bar, they put together a show called Midnight—a nightclub act where Trevor sings Arthur’s love songs with their male pronouns intact. But, as the lovers hurtle towards the end of the decade, they find themselves caught in a passion they can’t control and a political revolution they don’t understand.

Featuring a seductive score inspired by the Great American Songbook, Midnight at the Never Get is a sultry meditation on identity, memory, and enduring romance.

Midnight at The Never Get was produced in a sold-out run in the 2016 New York Musical Festival, followed in 2017 by a critically-acclaimed six-week engagement in Provincetown, Massachusetts, with The Never Get created as a fully immersive club venue.

In November, The York Theatre Company will honor five-time Tony Award-winning musical theatre director/choreographer Susan Stroman (Oklahoma!; The Producers; Crazy For You; Show Boat; Big, The Musical) with the Oscar Hammerstein Award for Lifetime Achievement in Musical Theatre at the 27th Award Gala to be held on Monday evening, November 12, 2018 at Signature Theatre (480 West 42nd Street).

The VIP Reception will begin at 6:00 p.m. followed by a concert and award ceremony at 8:00 p.m.  York Associate Artistic Director Michael Unger (You’re a Good Man, Charlie Brown; Big, the Musical) is set to direct the evening’s celebration. For additional information, pricing, and reservations, please contact Director of Development Shana Farr at (212) 935-5824, ext. 214 or sfarr@yorktheatre.org.

The Oscar Hammerstein Award is named in honor of the legendary lyricist and librettist who helped shape American musical theatre through his collaborations with a number of different composers and writers.  His contributions to such landmark musicals as Show Boat, Oklahoma!, South Pacific, and Carousel are a legacy for all time.  The award was created in 1988 by Janet Hayes Walker, Founding Artistic Director of The York Theatre Company, and is presented with the endorsement of the Hammerstein family and the Rodgers and Hammerstein Organization.  Its purpose is to recognize significant lifetime achievement in musical theatre and is presented at a gala evening held for the benefit of The York Theatre Company.

Ringing in the holiday season in December is the second Mainstage production: the premiere of the new musical Christmas in Hell with book, music, and lyrics by Gary Apple, directed and choreographed by Bill Castellino. Performances are scheduled to begin Tuesday, December 4,2018 for a limited holiday run through Sunday, December 30, 2018 at the York Theatre Company at Saint Peter’s.  Opening Night is set for Sunday evening, December 9, 2018 at 6:45 p.m.

Looking for a sweet, wholesome holiday musical? Well, this ain’t it! On Christmas Eve, little 6-year-old Davin is mistakenly taken down to Hell.  When he returns, not only has he missed Christmas, but he is devilishly changed.  To set things right, his father embarks on a bizarre odyssey that eventually leads him down to Hell itself where he makes a wager with Lucifer he can’t possibly win.  Christmas in Hell, with book, music, and lyrics by Gary Apple (“The Simpsons”), is a wild, irreverent and surprisingly touching musical comedy about the absurd lengths we’ll go to for the ones we love.  After award-winning appearances at the NY Fringe Festival and NYMF, Hell now arrives at The York for a full production, way more naughty than nice.

The winter season continues with the acclaimed Musicals in Mufti series, this time celebrating the centennial of the legendary librettist and lyricist Alan Jay Lerner.  The series honors one of the creators behind such classics as Brigadoon, Camelot, Love Life and My Fair Lady. The 2019 Winter Mufti series celebrates Lerner with a look at three of his musicals: Carmelina, and two lesser known Lerner gems to be announced shortly. These musical theatre gems, performed in a simply-staged, book-in-hand concert format, are part of the Muftis’ twenty-fifth historic year of presenting shows from the past that deserve a second look. Mufti means “in street clothes, without the trappings associated with a full production.”

Opening the 2019 winter series is Carmelina, with music by Burton Lane, lyrics by Alan Jay Lerner, additional lyrics by Barry Harman, and book by Joseph Stein and Alan Jay Lerner.  After previous sold-out Mufti runs in 1996 and 2006, the delightful Carmelina makes its return to the York.  In a picturesque Italian village, Carmelina has raised her teenaged daughter to believe her father was an American who died heroically in World War II—all the while collecting child support checks from three American soldiers, each of whom thinks he is the girl’s father. Complications arise when all three soldiers show up at the same time for a reunion. Even though the original Broadway production only ran for 17 performances, the lush Lerner and Lane score received a 1979 Tony Award nomination for Best Score.  The version of Carmelina presented here is the revised version created by Joseph Stein, Burton Lane, and Lerner protégé Barry Harman for The York in 1996, then further revised for a second Mufti presentation ten years later.   Performances begin Saturday afternoon, January 26, 2019 and continue for 11 performances only through February 3, 2019.  Opening Night will be Sunday evening, January 27, 2019 at 7:00 p.m.

ONE-DAY ONLY ALAN JAY LERNER BIRTHDAY SPECIAL: To commemorate Alan Jay Lerner’s 100th birthday on August 31st, The York will offer a SPECIAL BIRTHDAY PACKAGE of $100 (savings of up to $50) for the entire Mufti series, on Friday, August 31 ONLY, that will be available online at www.yorktheatre.org, by calling (212) 935-5820, or in person at the box office at The York Theatre Company at Saint Peter’s (Entrance on East 54th Street, just east of Lexington Avenue), 12:00 p.m. – 6:00 p.m.

The York will close out the 2018-2019 season with a Spring Mainstage production of a special musical to be announced.

September brings the launch of the new Show Time! Trilogy, presented in association with UnsungMusicalsCo. as part of a three-year partnership and hosted by The York Theatre Company.  The Show Time! Trilogy features over two dozen songs in an electrifying live-action documentary, weaving music and performance through a narrative of world, cultural, and theatre history.

The first in the new series is Show Time! The First 100 Years of the American Musical, a new documentary musical telling the remarkable story of a uniquely American art form, charting its evolution from the mid-1800s through 1999. Developed for over four years from more than 20 archives in more than 10 states, Show Time! is created, written, and performed by Ben West, a 2017 recipient of Lincoln Center’s Martin E. Segal Award, with musical continuity and arrangements by Fran Minarik and direction and musical staging by Shannon Lewis.