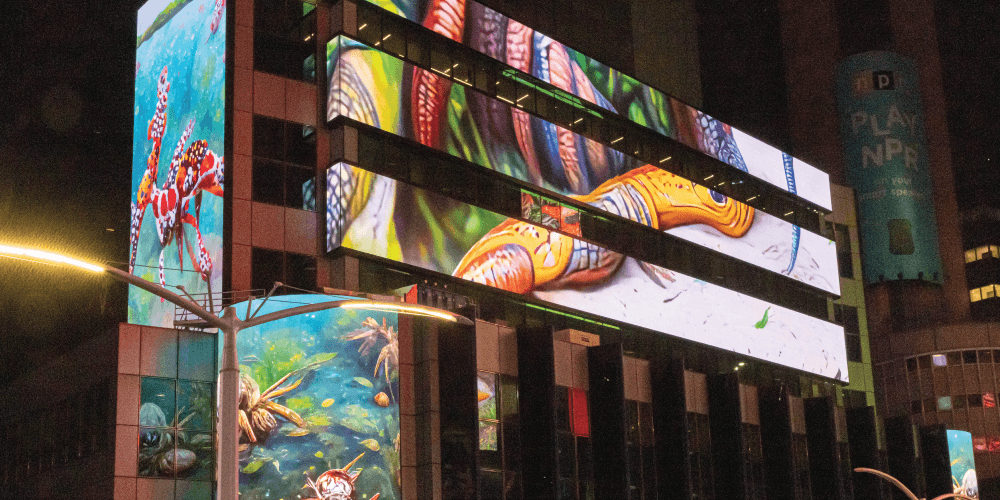 A small mouse stands on two paws as it lifts its nose to sniff the air; colorful fish with shifting patterns drift underwater; flowers bloom and sway on tall, delicate stems. The painterly flora and fauna of Sofia Crespo’s Critically Extant are based on real, critically endangered species like the Perote Deer Mouse, the Mekong Giant Catfish, or Parakaempferia synantha (a plant in the ginger family).

Crespo trained AI algorithms on millions of open source images of approximately ten thousand species, using the resulting models to generate visual representations of animals and plants that — despite being endangered — have little or no presence on social media or in the broader public discourse.

The generated representations appear slightly uncanny in form, in part due to the limitations of AI, but primarily due to the lack of man-made input available. How can an algorithm perfectly recreate an animal when it has too few examples of what that animal looks like? And how can we work to  save endangered species if we’re not aware of them?

Crespo’s goal was to not only trace the limitations of our knowledge, but also to explore how we can disrupt feedback loops online by infiltrating digital spaces with more intentional representation: putting ideas and images onto the internet that, in turn, influence and reaffirm the content we choose to post and share. To this end, Crespo began the project as an Instagram exhibition, making these lesser-known creatures part of the digital content ecosystem and our daily media intake. The artist has also created a collection of AR filters inspired by critically-endangered plant and animal species native to the New York region. By framing endangered species and ourselves in the same image, and making these images part of our daily digital intake, the artist experiments with new ways of creating awareness and engagement.

“This project underlines the difficulties we face in shifting our digital spaces towards more balanced representation, but it should be grounds for agency too: as we can all create and contribute both physically and digitally, and as such, can actively work to form new feedback loops that can help bring the critically endangered species into our daily lives in order to get to find ways to care for them?”
— Sofia Crespo

As the works propagate across the screens of Times Square, one of the most visited and most Instagrammed places in the world, they reach an audience of hundreds of thousands on the ground, with the potential to connect with countless more. Additionally, Crespo’s work brings the natural world directly into the center of the very urban environment at odds with these at-risk species, and nods to the human changes that will be required to save them.

All the species shown in Critically Extant, sorted by kingdom, phylum, and class:

Critically Extant is co-presented by Meta Open Arts and Meta AI Research, where the artist was in residence in 2021 and first developed this project.

Critically Extant is the second of twelve works by women that will appear as Midnight Moments over the course of a year, in celebration of the 10th anniversary of the program.

Sofia Crespo is an artist working with a huge interest in biology-inspired technologies. One of her main focuses is the way organic life uses artificial mechanisms to simulate itself and evolve, this implying the idea that technologies are a biased product of the organic life that created them and not a completely separated object. Crespo looks at the similarities between techniques of AI image formation, and the way that humans express themselves creatively and cognitively recognize their world. Her work brings into question the potential of AI in artistic practice and its ability to reshape our understanding of creativity. On the side, she is also hugely concerned with the dynamic change in the role of the artists working with machine learning techniques. She’s also the co-founder of Entangled Others Studio.

Meta Open Arts empowers community through creativity. As a company dedicated to bringing people closer together, Meta recognizes that creativity is essential to our collective well-being. Within Meta’s walls and around the globe, Meta Open Arts cultivates creative engagements that offer new ways of thinking about ourselves, our communities, and the world at large.