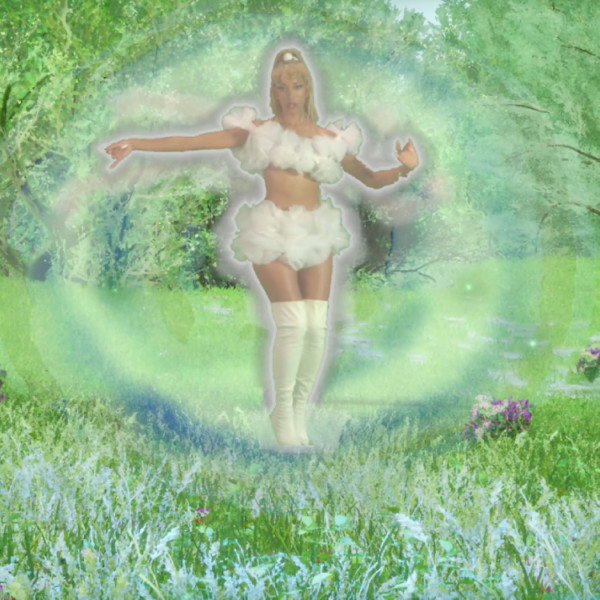 In Times Square from August 1–31, nightly from 11:57pm – 12am, multi-disciplinary artist KESH brings a visual fantasia to the screens of Times Square every night in August with eye-land, imagining a verdant world within the hyper-digital center of the city.

In eye-land, butterflies travel through a lush natural landscape in which KESH herself appears, enveloped in a colorful aura. As she recedes and reappears, the viewer is beckoned through flowers, rivers, and trees, periodically encountering a rotating chrome eye — a new adaptation of a symbol that has appeared across much of the artist’s practice.

In this work themed around metamorphosis and co-existence, KESH aims to unite the future and the past of New York City, inspired by the notion that our contemporary surroundings of concrete and manmade technologies were built by drawing on the natural resources of the earth. The buildings and billboards of Times Square become an embodiment of both modernity and the historic environment that lies beneath; by taking us on a journey into a fantastical past, KESH proposes new expressions of our future. The title itself is a twist on the word “island,” a nod to the island of Manhattan, in all of its evolutions.

“As I walk through the streets of Manhattan, I feel my feet journey across the concrete. I see buildings sprouting up like trees and often wonder — what lies beneath? What do we suppress as we grow?”
— KESH

KESH will perform a live curated DJ set in Times Square on August 25 from 11pm until 12am. She will conclude her set with an original musical composition, “What Lies Beneath,” created specifically to accompany the eye-land visuals as they are displayed on 90+ billboards from 11:57pm to 12am.

RSVP for the performance.

“What Lies Beneath” is available on all music streaming platforms HERE.

eye-land is presented in collaboration with Womxn in Windows.

Midnight Moment is the world’s largest, longest-running digital art exhibition, synchronized on over 90 electronic billboards throughout Times Square nightly from 11:57pm to midnight. This year, Times Square Arts is celebrating the ten year anniversary of the Midnight Moment series with a roster of all women artists until April 2023.

KESH is a British multi-disciplinary artist whose work stretches boundaries between visual art, music and design. Her vision transcends the confines of a singular narrative. In an eclectic celebration of her gifts, KESH, masterfully blends creative technology and experimental sonic art with the more traditional methods of photography, film, sculpture and illustration to produce large-scale digital works, campaigns and installations that are immersive and unmistakably KESH. Her artworks have been sold at historical institutions such as Christie’s Auction House and The Museum of the African Diaspora. KESH’s work has been featured in publications such as Vogue, The Economist, Channel 4 News, Elle, i-D, and the New York Times.

Womxn in Windows is a community for the perspectives of womxn on culture, identity and society. What started as an annual public exhibition of womxn-made art films in storefront windows is now on a mission to support intergenerational and cross-cultural dialogue. Centered around the idea that individual differences advance societal strength, the platform believes that learning from one another’s cultures and experiences contributes towards a transformative humanity of equality, freedom and respect. By providing a forum for diverse and underrepresented voices and their stories, Womxn in Windows hopes to transform our relationships with each other. Womxn in Windows was founded in 2019 by Zehra Ahmed.