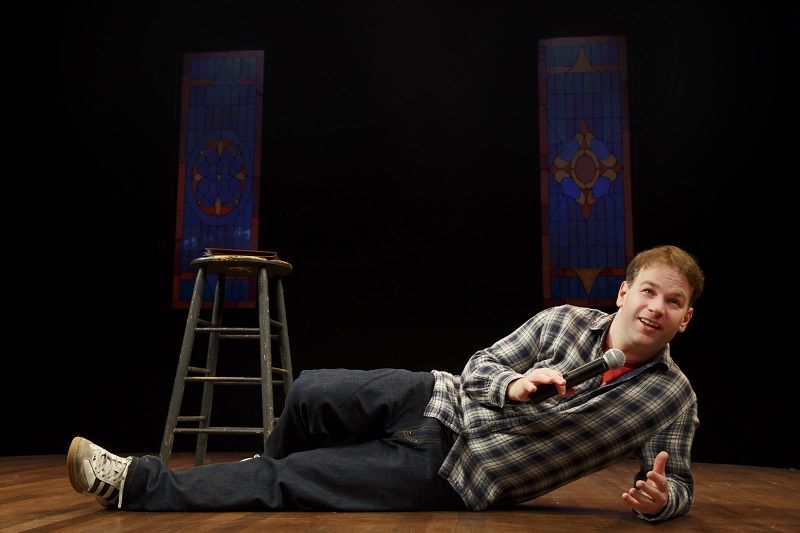 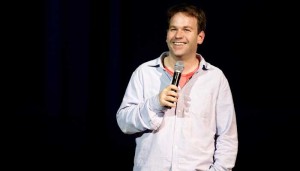 In Thank God for Jokes, Mike Birbiglia reminds us that, “Jokes are your side of the story. Your opinion.” He is interested in what a joke is, where it comes from, and what purpose it serves. He is interested in the psychology behind joke telling. He reminds us never to end a joke with “I’m joking,” which we so often do, perhaps as a way of apologizing for that possibly offensive joke we just told.

In his hilarious and smartly crafted eighty-five minute monologue, Birbiglia masterfully shares his side of the story. Captivating the audience with stories of meeting President Obama to that time he did yoga to that other time when he had to finish his sandwich in the bathroom of an airplane he was flying on. Birbiglia is a seasoned comedian, but this show exceeds just any old standup routine. Through comedy, Birbiglia shares a piece of himself. He is a philosopher as well as a storyteller as well as a comedian.

Before we meet Birbiglia we meet Jimmy Kimmel. Well, actually we are introduced to a large screen, 2012 version of Kimmel who is in fact introducing Mike Birbiglia, the host of the 2012 Gotham Awards. Shortly after we meet Birbiglia in person, on stage, we are left to ponder whether or not jokes can in fact not be offensive. This question, hovering over us throughout the show, comes full circle when Mike Birbiglia shares his Gotham Award story, which involves a speech involving David O. Russell. I shan’t say more. Go see the show. Birbiglia’s retelling of the event is priceless.

As a performer Birbiglia is active and alive, which is very enjoyable to watch. He isn’t one to just stand onstage and tell the joke. He physicalizes his jokes, becoming the people and things he speaks of.
Mike Birbiglia ingratiates himself with his audience right off the bat. He is charming, warm, friendly, playful and honest. A highlight is when he reaches out to the audience to inquire as to whether anyone has ever been arrested. Keep in mind he has just shared his own arrest story. He plays with the audience and includes us. He connects and stays engaged with us throughout. In turn we stay engaged.
Birbiglia proves that the more personal you get the more universal your story becomes. He doesn’t hold back and therefore the audience is able to connect and relate to him on a profound level. This is a

show that has something for everyone to relate to. Looking around at all the happy and engaged faces in the audience made this even clearer. Don’t miss this one.

Suzanna BowlingMay 17, 2022
Read More
Scroll for more
Tap
Long Day’s Journey into Night A Classic That Stands On Its Own
Adding Machine: A Musical – Avant-garde Out of Body Adventure