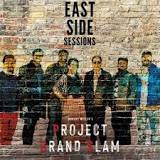 Over the course of some outstanding albums (Including the Billboard #1 jazz-album Trippin’) Robert Miller’s Project Grand Slam has fashioned itself into one of the premiere first-rate jazz/rock/latin/fusion bands. They’ve played festivals; have performed with the likes of YES, Boney James, and Blues Traveler, and have made an indelible mark on the contemporary music scene.

Their new album, East Side Sessions, continues that miraculous journey … with some surprises, we spoke with Miller from Stockbridge, Massachusetts, where he has spent some shelter-at-home-time … working on the new album and a possible surprise:

Q: Tell us about the new album East Side Sessions

A: My goals with Project Grand Slam include releasing a new album each year, and continuing to push the envelope with my music and the band’s sound. Over the last 5 years I’ve transformed PGS from an instrumental-based contemporary jazz group into a vocal-oriented Jazz Rock Latin fusion band. I crave diversity with my music, the antithesis of some artists who basically play the same song over and over.

East Side Sessions continues this trend. I’ve introduced a new singer (Marilyn Castillo) and sax player (Alex Blade Silver) into the band, and written 11 new songs that run the gamut from hard rock to country rock to Latin to ballads, and also what may be the world’s first Cowboy Jazz song. Plus, as I do on each album, a “reimagined” version of a Classic Rock song, this time a Beatles song renamed “I Wanna Be Your Girl”.

I think it all works really well, and the critics seem to agree, as the album has been praised so far as “Album Of The Year”, “A Sonic Tour de Force”, “A One-Way Road To Heaven”, and more.

Q: How has the pandemic affected you and the release of the album and the band?

A: For musicians the pandemic means that it’s not possible for us to play live together right now. Fortunately, we finished recording East Side Sessions at the end of January before the world closed down. So at least in this regard we skirted the pandemic.

Q: You opted to release several videos before the July 31 album release date; was that because of the pandemic?

A: The coin of the realm these days in music is to release videos of your songs on YouTube. I decided early on in the pandemic that there were a couple of songs on the new album that were perfectly suited to being released at this time – even though they were written and recorded well before.

The first one we released was “It Is A Miracle To Me”, which is a joyous, upbeat, positive song. I felt that it was kind of the musical antidote to the virus. It did very well with the public. Next, we released “I’m Falling Off Of The World”, a song that I wrote about how all the trials and tribulations in life make us feel. This video struck an even bigger chord (pun intended) with the public and is over 350,000 views as of this date. Both of these videos were recorded remotely by the band, and then edited together by our terrific video editor, Aaron Wilhelm.

Then we released a third video from the album of a song called “The Pardners”. The song itself is a bit tongue-in-cheek as it’s about two partners in crime in the old West, one of whom cheats the other, the other partner takes revenge but ultimately pays the price. For the video I suggested to Aaron that we do a Western movie motif that tells the story. One complication is that the song is sung by a woman, so we needed to find Western movie footage with a female heroine. Luckily, Aaron was able to locate a Spaghetti Western from 1968 starring the beautiful Italian actress Elsa Martinelli – and he transformed her movie into “The Pardners”. So different and so spectacular!

Q: The album production is sounding better than ever too; tell us about that end of the   production.

A: We record each album at my favorite studio in NYC called EastSide Sound run by my buddy Lou Holtzman. Frankly, that’s how I came up with the name East Side Sessions, as the studio is located on the Lower East Side of Manhattan.  The front and back covers of the album totally capture the LES vibe.

Q: What do you foresee the live concert scene being like down the road?

A: Tough question. We were scheduled to perform at several major festivals this summer, including MusikFest in Pennsylvania where we performed last year, and the Nisville Jazz Festival in Serbia where we performed in 2018 (and which became our 2019 album “Greetings From Serbia”), in addition to a European tour in July/August. Obviously that all fell through.

My fingers are crossed that bands will be able to perform again soon at festivals and major venues.  Until then, however, we will continue to put out music and interact with our fans as best as we can.

Q: What’s next for you musically?

A: I’ve written a bunch of new songs during the pandemic, and we’re in the midst of recording them. But it’s quite challenging to do so because I do not have a professional home studio or professional recording equipment. So, I’ve been singing and playing into my iPad and iPhone! I then email the tracks to Lou who miraculously transforms them into studio quality. I then send the tracks around to each of the musicians in the band that I want for each track, they record remotely, send it back, and Lou does his thing.

I’m so pleased with the results. One major difference is that I sing each of the songs. Previously I only ventured into harmony and background vocals. But this time around I feel comfortable that I can carry the vocal load. So, I anticipate releasing the new songs as a Robert Miller album sometime in the next few months. That would be a real kick for me!

Suzanna BowlingJanuary 16, 2022
Read More
Scroll for more
Tap
What To Watch July 17th To Take Away The Blues
Kastel Hits A Home Run With His Debut Album, Time Travler