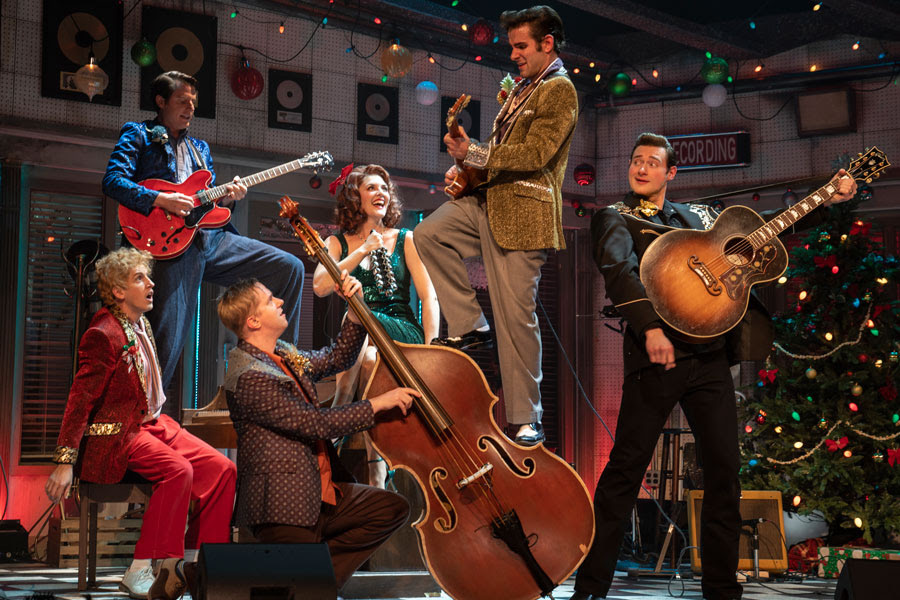 To say that the eight actor/singer/instrumentalist’s onstage are talented would be an understatement – as they are all triple threats. Joe Boover as Elvis has a terrific voice and presence and is no slouch on his instrument. Tyler Michael Breeding sounds remarkably like Johnny Cash and is adept on several different guitars.  Sam Sherwood (Carl Perkins) rocks it out on his lead guitar solos while James David Larson on bass (Brother Jay) and Tucker Cruz Marshall on drums (Fluke) hold it all together. Statuesque and poised Margaret Dudasik as Elvis’s current girlfriend (Dyanne) lends an air of sophistication to this rowdy group of up and coming stars to be.  Not only possessed of a great voice – she plays the ukelele. But making more noise and histrioinics than anyone else is Jason Cohen as Jerry Lee Lewis. Not only does he bang the hell out of the little spinet on stage, he attacks it every which way and shows it who’s boss in true Jerry Lee Lewis style. 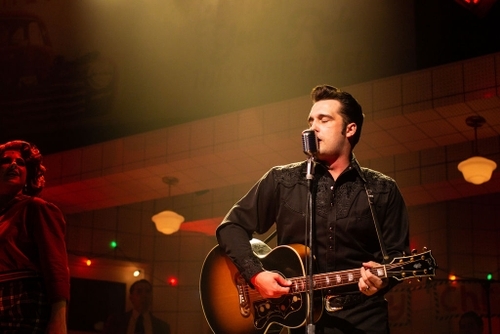 The original Million Dollar Quartet premiered on Broadway in April 2010 and was nominated for three Tony Awards. Years ago I reviewed the National Tour and liked it very much. Million Dollar Quartet is a jukebox musical with a book by Colin Escott and Floyd Mutrux dramatizing the recording session of December 4, 1956, among the rock n’ roll icons Elvis Presley, Johnny Cash, Carl Perkins & Jerry Lee Lewis, who recorded at Sun Studio in Memphis.

This Christmas version by Colin Escott, tries to cram too much into one evening.  The Christmas season has brought all four rising stars to Sun Studio to say goodbye to their original discoverer, Sam Phillips, (played by Brian Michael Henry) head of Sun Records. There’s a lot of bickering by Sam about losing all the talent he has discovered to bigger record companies. But Christmas songs and gospel songs are sung inbetween the gripes. Another plot line is that Dyanne doesn’t think she will stay with “the king”. When the band starts cooking it is infectious.  But all too soon, it’s slowed down with another plot line – should Elvis stay with the Colonel or not?  Not matter what, Elvis is about to be inducted into the Army.  As the evening winds down, everyone says their goodbyes.  The show ends and the actors come on for curtain calls.  Then they pick up their instruments and play a whole new Christmas set that rocks out the house. One of them is the iconic “Santa Claus is Coming to Town” a la Bruce Springsteen.  Why wasn’t this fabulous chunk of music incorporated into the show?  You could still save one or two tunes for the encores and leave the audience with happy holiday cheer. 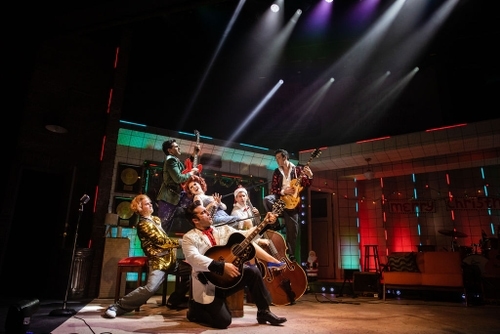 The set is a holiday feast for the eyes by Josh Smith. Smith has taken what was probably a dull music studio and turned it into a carnival of lights and dimension. And the costumes by Lauren T. Roark are fun, flashy and fit the period.  There is no doubt that the music is terrific fun if you’re a fan of good old rock n’ roll and holiday classics like “Rockin’ Around the Christmas Tree,” “Blue Christmas” and  “Jingle Bell Rock”.