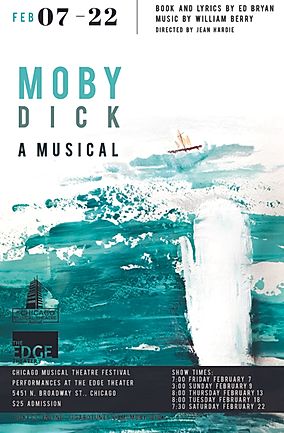 Moby Dick, the elusive white whale at the center of the classic Herman Melville novel, is not just the mad passion of Captain Ahab. He is also the fevered obsession of many a musical theater writing team, determined to capture his story in song. In my fourth report on new musicals at the Chicago Musical Theatre Festival 2020, the writing team of Ed Bryan (book and lyrics) and William Berry (music) bring their new musical version of Moby Dick to the stage, and damn near harpoon him.

This team has come all the way from Spokane, Washington with the biggest set of the festival (which I understand Mr. Bryan, a hearty man in his 60’s, built and drove here by himself), a cast of twenty plus, and a great Captain Ahab, Spokane singer/actor William Garry, whom you definitely should catch here while you can. Although this festival prides itself on being bare bones, all the effort that went into bringing this production here deserves your support alone. Fortunately, this is also a very good show, which I think will only get better after this run.

“Call me Ishmael” says the narrator of Melville’s novel, who sets off to find adventure at sea by signing aboard the whaling ship, Pequod. He soon learns that he and his mates will be helping Captain Ahab hunt down the beast that once took his leg. What he doesn’t know is how great a price they all will pay.

According to Mr. Bryan, this show began as a sung through opera, which now wants to be a musical theater work. Opera is characterized by its use of recitative, in which dialogue is set to music without repeatable patterns of words and music which identify a passage to audiences as a distinct song.  By contrast, musicals which convey information through scenes of spoken dialogue generally rely on capturing and distilling peak emotional moments into a few key, repeated words, called the “hook” of the lyric, and melodic patterns which the audience can remember. Even in opera, nobody goes to Carmen to hear the recitative. They go for the arias they can hum. (Sorry, Mr. Sondheim!)

So this show contains a lot of recitative which needs to be restructured into memorable, accessible songs if it wants to be another Big Musical. Right now, this operatic convention sits uneasily with the dialogue scenes and never quite captures the emotional moments for all its characters.  As the show goes on, and Ahab takes focus, they are more successful.  One song in particular, “What Price I Paid,” has the kind of personalization that the whole show needs more of.

A lot of the credit for the power of the production goes to William Garry’s haunting performance as Ahab. He is a fine operatic bass-baritone of the caliber one doesn’t often hear on our non-Equity musical stages. He also has just the right mature, haunted look for this weathered seaman.

William Berry’s music captures the rising and falling of the sea chanty, and extends the pulsing 6/8 rhythms through much of the show. Every so often, he would work in a musical motif with a lyric by Mr. Bryan which delivered that much desired hook, however subtle. Adam Guettle’s work similarly takes a hearing or two to pick those patterns out. But while my ears were dying for a simple melody, I had to admire how well crafted the music was on its own terms. Mr. Bryan’s lyrics also do a serviceable job in the sections of recitative, and get better when they are allowed to be more personal, as in Ishmael’s final moments onstage.

The production is blessed with a talented cast of Dickensian character actors under the tasteful direction of Jean Hardie. She is as effective in guiding the big, broad scenes on the docks and on the ship, as she is in subtle moments, such as when the first mate Starbuck (Kyle Kite) contemplates killing Ahab with his own gun.

There are many to praise in this fine company. Among them are Nate Hall, who is a winning Ishmael. Peter Ruger’s subtle, deadpan Islander Queequeg is very endearing.  Ginny Waeant as Mary Starbuck is a glorious legit soprano whose singing made me want to hear more of her in the future. Hannah Silverman also sang quite nicely as Ahab’s wife, Annie. Kevin Blair as Doughboy, who is nearly eaten by sharks, and Zander Gallapi as Captain Gardiner, pleading for Ahab’s help in finding the ship which disappeared with his son aboard when Moby Dick dragged it away, were both moving. Among the character men, Aaron Johnson as Stubb, Peyton Linch as Peter Coffin/Peleg/Carpenter, and Chris Jowett as the Irish Bulkington in particular were wonderfully salty and working class. Imposing bass Sean Rhead was also delightfully creepy as Elija/Daggoo. Others in the company include Grant Brown, Hope Campbell, Melody DeRogatis, Theresa Egan, Aszkara Gilchrist, Courtney Miller, Nicholas Pardo, Charlie Scriven-Young, Adriana Schallack, and Stefan Schallack.

The fine band is led by Music Director/keyboardist Annie Flood.

Big shows like this have a hard time getting done in local theaters unless they have a Broadway debut to brand them nationally, and they usually can’t get that Broadway  production without being seen first developmentally. Only a festival like CMTF is committed to helping shows like this bridge that developmental rock-and-a-hard-place. So congrats to the team for their good work, and thanks to CMTF for bringing it to us.