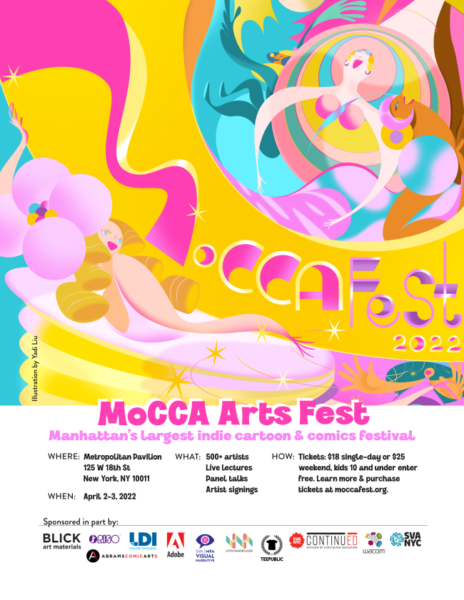 The Society of Illustrators welcomes back audiences to the 2022 MoCCA Arts Festival in celebration of top comic, cartoon and illustration artists from around the world. Featuring work by over 500 creators the weekend will also include live lectures, panels, and artist signings. The Fest takes place April 2 – 3, 2022, on Saturday, 11am – 7 pm  and Sunday, 11am – 6 pm.

Now located in a new, spacious venue, Metropolitan Pavilion’s large floor plan and high ceilings provides a bright and well-ventilated space for all fest guests. Located at 125 W 18th Street, the Chelsea-based Met Pavilion is within walking distance to many restaurants and attractions. Programming is steps away at the SVA Flatiron Gallery (133 W. 21st St).

Manhattan’s largest independent comics, cartoon and animation festival, This two-day multimedia event draws over 7,000 attendees each year. 500 exhibiting artists display their work, award-winning honorees speak about their careers and artistic processes and other featured artists conduct demos, lectures and panels. The Fest’s mission accelerates the advancement of the Society’s effort to serve as Manhattan’s singular cultural institution promoting all genres of illustration through exhibitions, programs and art education.

To promote this year’s Fest, the Society asked previous MoCCA Arts Fest exhibitor and Award of Excellence gallery artist/creator Yadi Liu,  to create a colorful, celebratory image for the cover of the Souvenir Journal. The images are featured prominently on all advertising and promotional materials, as well as a selection of merchandise available to purchase at the SI Booth.

Said Executive Director Anelle Miller, “Yadi’s art really captures our excitement for the return of the Fest. After several years of challenges and disappointments, we are so happy to welcome everyone back.”

In addition to Liu’s art, the Society also engaged other notable artists to create work for the show. Natalie Andrewson’s whimsical creatures will be displayed on the badges, and Patrick McDonnell’s quirky MUTTS characters will be featured as spot illustrations found throughout the Fest. These featured artists will be attending the Fest, and their schedules and table locations are available.

Founded in 1901, the Society of Illustrators and its Museum of Illustration comprise America’s longest-standing nonprofit organization dedicated to the art of illustration. Its mission is to promote the art and appreciation of illustration, its history and its evolving nature through exhibitions and educational programs.

Tickets can be purchased online as well as at the door.

In accordance with the New York City mandate, all attendees, exhibitors, panelists, volunteers, vendors and staff aged 5 and older must show proof of full vaccination with proper ID (for those 18 and older). Masks are required. This year’s Fest will include space in between tables and wider aisles. Floors will be continuously sanitized by event staff.

In 1990, Ohio-based cartoonist Derf Backderf began drawing his alternative weekly comic strip The City. Over more than 20 years, the self-syndicated weekly strip appeared in 140 publications, covering culture, politics, and daily life. In 2009 he published his first graphic novel, Punk Rock and Trailer Parks, and in 2012 he published the graphic memoir “My Friend Dahmer,” an account of his adolescent friendship with future killer Jeffrey Dahmer, which was later adapted into a feature film. Derf will discuss his work and career with Karen Green, Curator for Comics and Cartoons at Columbia University’s Rare Book and Manuscript Library.

Artist and author Mike Mignola is best known for his character “Hellboy” as well as for works including “B.P.R.D.” “The Screw-On Head”and, most recently, “Radio Spaceman.” Viktor Koen, Chair of SVA BFA Illustration and BFA Cartooning, will join Mignola to discuss the intricacies of visual storytelling

4:00 – In These Times: Steve Brodner and Nora Krug in Conversation

Nora Krug’s graphic memoir “Belonging” confronted her family’s connection to the rise of Nazism in her homeland of Germany. Last year, Ten Speed Press published her illustrated edition of “On Tyranny,” historian Timothy Snyder’s succinct series of warnings and lessons that gained disturbing relevance in the past several years as authoritarianism became a more visible part of political culture both in the US and abroad. This year, legendary political artist Steve Brodner will publish Living & Dying in America: A Daily Chronicle 2020-2022.