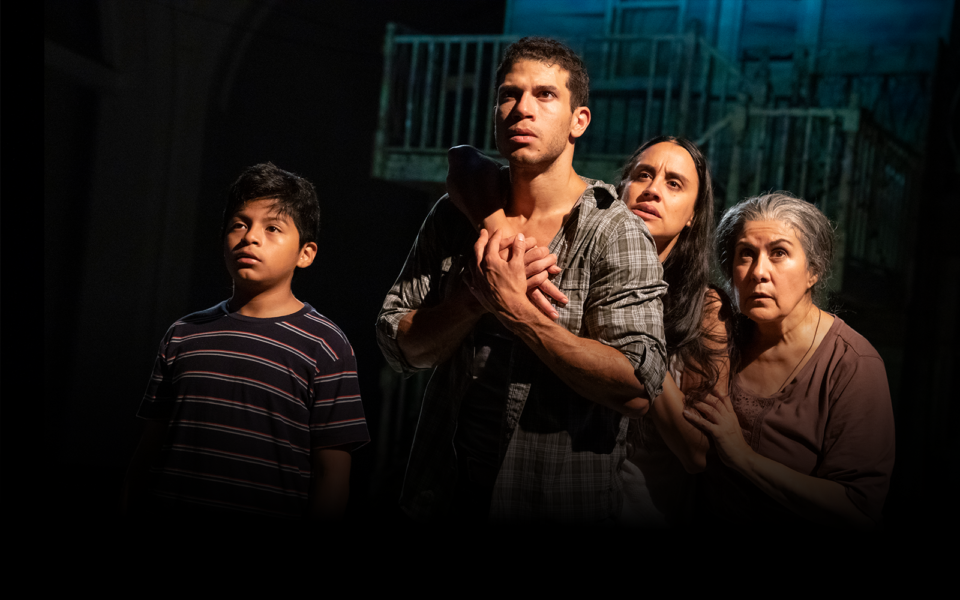 When I review a show, I try to go in blind. I turned to another critic and stated “this is just like an an immigrant Medea”. Turns out Luis Alfaro’s, a MacArthur “Genius” Fellowship recipient based his new play Mojada, on Euripides’ Medea.

Set in Corona, Queens, Medea (the fabulous Sabina Zúñiga Varela), cannot leave her house. She works her hands to the bone for little money as a seamstress, despite the fact she is a talented designer. Medea loves with all her heart her husband Jason (Alex Hernandez), her 10-year-old son Acan (Benjamin Luis McCracken) and a live-in servant Tita (Socorro Santiago), who has been with Medea since childhood. Both Medea and Tita are healers and long for Mexico.

They are undocumented immigrants who live in fear of being deported. It was Jason dream to come here, but Media clings to her old life as Jason Americanize his son.

Medea is haunted by her past and for good reasons. Jason seems to be an accepting and a loving husband, but in fact he is making and has made plans that do not include her. Turns out her run-down house has been rented from Jason’s boss Pilar (Ada Maris), a Cuban émigré who wants and takes what she wants. She does not care about Medea or her feelings and it becomes her downfall and Medea’s flight into her never ending hell.

In every sense of this play, it is evident that women are damned, especially immigrant women. First in their own country, they are seen as nothing but property. They are beaten and abused. According to several studies 78.6%  of all women age 15 and older have experienced some kind of violence in their lives. In trying to escape most are raped. Amnesty International reported that women and girls that have been sexually assaulted over the course of their journey might be as high as 60%. Then they come to America and these women are either abandoned or are the sole supporters of the men they came with. Many men leave the women they never married to marry for a green card. Even the women do not support each other. In this play Medea is abandoned by Luisa (Vanessa Aspillaga), a Puerto Rican churro vendor who entreats Medea to make not one, but two dresses for her on credit or for churro’s. When Medea desperately needs a place to stay, she declines as Pilar and Jason are helping her financially and she doesn’t not want to jinx that. In the end Pilar’s unkindness and cruelty is both her and Medea’s undoing.

Chay Yew directs this piece with a haunting look at a no win situation. He makes us re-think the plight of women and shines a light on the inhumanity we show each other. This made be a cautionary tale, but it has a wisdom to impart.

Alfaro has a way with words and letting his story unfold. Some things seem so inevitable and yet others are shocking and rather sad at how they reveal themselves. It was quite clever how he uses Tita as the Greek chorus.

The design element were all well done. From Arnulfo Maldonado’s rundown set, to David Weiner’s haunting lighting, as Mikhail Fiksel’s sound design allowed us to hear the mystical and the reality. This was a world fully laid out.

As the show closes Ms. Varela, lets out a cry that leaves us with her painfully haunted betrayal. This play will touch you. As I was leaving I wondered how can we stop this attack on humanity and of women.

Suzanna BowlingJanuary 24, 2023
Read More
Scroll for more
Tap
Disney In Bryant Park With Aladdin, Frozen and The Lion King
Queen of Hearts is a Decedent Trip Down The Rabbit Hole