Molasses in January a Disaster In Oh So Many Ways

Molasses in January a Disaster In Oh So Many Ways 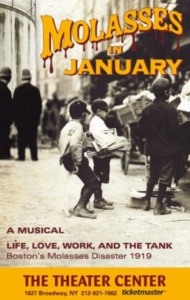 Have you ever heard of the Great Molasses Flood of 1919? Well neither had I, until I went to see Molasses in January, now playing at the Anne L. Bernstein Theater. With book, music and lyrics by Francine Pellegrino, one wonders how this show got the money, to be produced in New York, for a full fledged run. Ms. Pellegrino hasn’t the talent for this undertaking. At best this production can be described as amateurish. The whole production is one sticky disaster. The 19 songs, if you can call them that, neither enhance the story or move the action forward. There is no rhyme or reason for these songs to be sung. The songs also have no structure and sound like snippets of ditties, if they could have formed a coherent tune. They are badly pounded out on an out of tune piano, heavy on the pedal.

Then there were the lyrics, which repeated phrases three times and then went into a non rhyming or badly formed lyric. 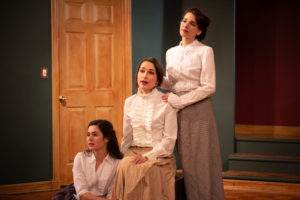 The story line is more about an Italian immigrant family in Boston. We only learn of the disaster that happened on January 15, 1919 in the last few minutes. Considering a large molasses storage tank containing 2,300,000 gallons burst, sending a wave of 25 ft high molasses rushing through the streets at an estimated 35 mph, killing 21 and injuring 150, shouldn’t this have gotten more attention? 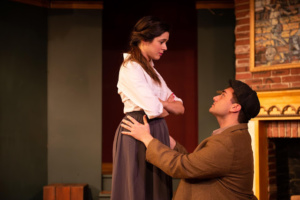 A narrator (Joe Redman), tells the story of Anna (Lianne Gennaco), whose husband was cheating on her. She kicks him out raising her two children Vincent (Joe Marx) and Rosemary (Anne Delado), alone. She meets Joe (Zachary Harris Martin) a mama’s boy, whose mother (Cali LaSpina) is not fond of her, as she deals with bigotry and racism. As she works in a sewing factory anarchists, labor organizers and sweatshops, are all put into the mix. It isn’t until the last 10 minutes, that we get the telling of how the disaster happens and of course the death of Rosemary’s fiancé Tony (Daniel Artuso) to try and make us feel something. After this information for the curtain call we get the reprise of a cheerful ditty called “Christmas Star”.

The cast was like watching badly performed community theatre, with not a lot of talent. The vocals for the most part were thin, nasal and sounded out of tune.

Director-choreographer Whitney Stone’s movement felt like a dance recital in small town USA and this ninety minute show seemed like it lasted for hours. Everything about this piece just doesn’t work, including the lack luster set and blinding lighting.

In researching this show it seems to have had productions in 2016 and 2017 in New York. Who is funding this show and why?

In the production that I saw, half the audience left at intermission and the lack of applause was astonishing. There is not a thing I can recommend about this production.

This video is from  the 2017 production.