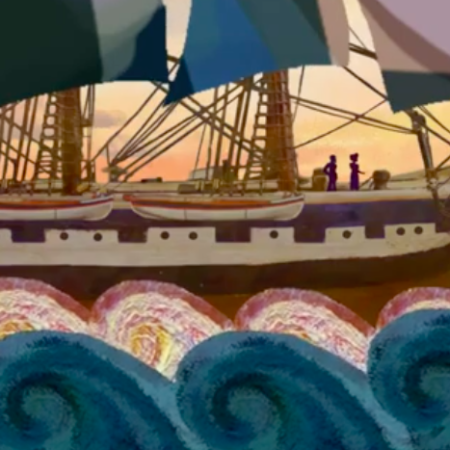 The time is 1896, and the ‘Separate But Equal Doctrine’ has just been upheld in the Supreme Court of the United States. This is the historic background of pen/man/ship, the live streamed latest from Molière in the Park, the same company that brought us the playful and good-natured Tartuffe back in June of last year. A Black American surveyor, steadfast in his convictions, has organized a ship’s crossing for him and his son to lead a secret expedition, one he doesn’t even want to talk about with his son. Bound for Liberia with his troubled son, he has rounded up a crew of men for the voyage, and much to his later surprise, a young Black woman named Ruby has been invited along by his son. The God-fearing father is clearly thrown off balance by this unspoken inclusion, but the son insists it was a necessary addition. She is in need, fleeing the oppressive American South in hopes of finding a new and better life in Liberia. She has decidedly boarded a ship bound for that breath of freedom that she so desperately wants, only she wasn’t aware that she would run into a different form of oppression and control onboard. The crew is skeptical of the goal, the journey, and the surveyor in charge, and because of all this, the sea air is tense with conflict. The shadows play out strongly before us with a cut-out intricity that only elevates the storyline, drawing us even further inside this inventive and complex live streaming of Christina Anderson’s riveting maritime drama, pen/man/ship. Within its wise reflective stance, the production finds its solid sea legs with confidence, strongly orchestrating the adventure using technology that both seems to reckon back to the time of shadow plays and puppetry, while also finding a modern seamless interactiveness that is both clever and refreshing, particularly in this complex socially-distanced time this production was created within.

The live streaming finds power in its process, closely engaging with this timely parable about violence, betrayal, faith, and freedom. It traps us inside the dark cabins on a ship that is flailing about in the open rough seas. The design ropes us in with its clever construction, with the convoluted clash of privilege and enlightenment forcing the dark and disturbing secrets that lay hidden in the hearts of all that are onboard into the light of the day. Played with a strong sense of self and purpose by Crystal Lucas-Perry (Public’s A Bright Room Called Day & Ain’t No Mo’), the strong willed Ruby clashes up hard against the unrepenting God-fearing dominate father, Charles, who never fails to find conflict within his congregation. He a formidable man, somehow maintaining a strong sway over his son and her tender and caring male companion, Jacob, the man responsible for her being invited onboard. This gin-drunk father figure, the immovable Charles, aggressively and finely portrayed by the focused Kevin Mambo (Broadway’s Fela!, Public’s Mlima’s Tale), demands obedience and passivity from his two companions, and nothing less, as they set forth on this mysterious journey that carry distant echoes to our troubling times in America. Charles shines darkly with self-righteousness, holding religious court over those around him, but it gives him little companionship. We watch, with tense anxiety, as the beautifully orchestrated shadow figures play out their roles against a painted backdrop, as if written by a hard toothed Sea God, scribbling and crying in their separate rooms by candlelight as the boat tosses and turns on the rough seas.

The young handsome Jacob, played with empathetic groundedness by Jared McNeill (HBO’s “We Are Who We Are,” TFANA’s The Valley of Astonishment), engages in a courtship that is steamed by heat and subtlety in the heavy sea air, but when Rudy, unwilling to sit passively below deck, befriends the disgruntled crew, the winds above begin to shift, and the movement forward is threatened with stillness and conflict. A mutinous uprising is at hand, putting all their lives, including one of its crew members, a sweet natured accordion player, tenderly portrayed by Postell Pringle (Broadway’s A Free Man of Color), who has bonded with Charles over gin and an unclear understanding. Ruby’s role has been elevated, and an impasse has been violently brought upon them all. The cast magnificently rises to the task as the sails are dropped in protest. The formulation on deck is at risk of being stilted and stalled when a stalemate strands the boat midway to its intended salvation. Secrets onboard are held tight, “like a miser holds coins“, as they turn their backs on an unfair America, sitting heavily on their souls while the ideas of home unravel before their travel-weary eyes.

It’s a captivating two hours (with one intermission), delivered with a strength of courage and conviction. Performed live with some beautifully enacted technology and crafty visuals, pen/man/ship sails its ideals through the choppy waters of the sea with expertise, seeking truth at all costs, even as the winds of change play havoc on their security. There is obvious danger in the hearts of the self-righteousness, that is clear, especially when locked inside the dark dampness of a tense father/son maritime sabbath. Such ignorance rocks the boat as sharply as the sea does on its determined journey to break-free, creating in the end a tightly wound pen/man/shipthat will engage and excite with each stroke of the pen. In a time when the thought of another Zoom play-reading makes me cringe with a dispassionate shudder, this Molière in the Park production finds its clear way through these stormy COVID waters to make landfall upright, intact, and with great impact.