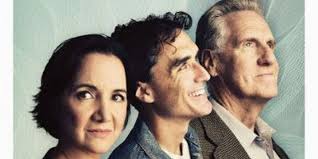 Brian Friel’s 1994 Molly Sweeney is being revived by The Keen Company. Directed by Jonathan Silverstein, artistic director of Keen Company and starring Pamela Sabaugh, a low-vision actor taking on the title role this show opened tonight on Theatre Row.

Having lost her sight at infancy, Molly Sweeney (Pamela Sabaugh) knows the world through touch, sound, taste, and smell. For her it is a miraculous world, one she constructed for herself. It is a independent rich life with friendships and sensual fulfillment. When she marries Frank (Tommy Schrider), he becomes convinced that she can only be complete when her vision is restored. He researches and finds doctor Mr Rice (Paul O’Brien), and her ill-fated encounter with these two men eventually destroy and cause her to go mad. Both men each have a vested interest in the operation.

The play is basically three characters, telling the same story to directly to the audience. They never interact even though they are all together. Each has a different points of view. Friel’s weaves his tale poetically, painting pictures in our mind.

In the day and age of woman and inclusiveness, Molly Sweeney has much to say. Molly’s husband, Frank, repeatedly states that Molly has “nothing to lose” by undergoing the operation. He can’t conceive that Molly is happy and content in her world. This just never crosses his mind. In a sense Frank is more damaged than Molly. Her view point is never really taken into consideration by Frank or the doctor, though the doctor does understand and has some remorse for what he has done. Frank when the problem can’t be solved runs away. Frank you see is a nomadic escapist and Mr Rice a whiskey-drenched dreamer seeking a way out of his own darkness.

Sabaugh, was the first low-vision actor to play the role of Molly Sweeney in 2007 at Philadelphia’s Amaryllis Theatre Company, and, as far she knows, the only one since in the U.S. Her portrayal is layered and complex, brimming with a joy of explaining her world. Schrider is a bundle of energy as the self-educated Frank. He becomes wildly excited about the “fascinatin’” research he does, unaware of the lasting effects it could have. O’Brien is a study in depression and regret. We see the man who turned to drink to escape at 32, when his wife abandoned him for a colleague.

The ensemble’s credible accents are a tribute to Jonathan Silverstein’s direction. He expertly blocks the monologues and gives them depth. Thanks to Anshuman Bhatia’s lighting each monologue, has even deeper moments.

Keen is working with consultant George Ashiotis (former co-Artistic Director, Theatre by the Blind) and partnering with blind and low vision schools and organizations to make Molly Sweeney accessible to the blind and low vision audience, including offering touch tours and audio described performances. No that makes this production a gem.