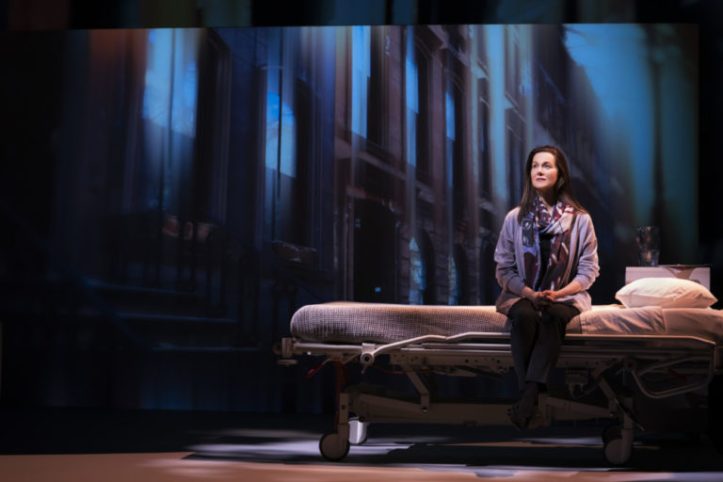 “Lonely was the first flavor I had tasted in my life, and it was always there,” Lucy says, “hidden inside the crevices of my mouth, reminding me.” And in those words a structure of understanding and underlying personal fear is imbedded in the stage adaptation of Author Elizabeth Strout’s (Olive Kitteridge) achingly simple but defiant My Name is Lucy Barton. Adapted by the detailed Rona Munro (Bold Girls, The James Plays), the precise entrance of the lead makes it clear that this one act one woman play is going to dive into family dysfunction from a foggy memory stance. Framed on the strong presence and dynamic voice of star Laura Linney (MTC’s The Little Foxes), her character starts and shifts, as memory often does, from one vision to another, beautifully articulating and bring forth the majesty of the cornfield light of Illinois, while also teasing out the painful memories of abuse and neglect.

As directed with clear intention by Richard Eyre (Bristol Old Vic/BAM’s A Long Day’s Journey Into Night), the intimate play delivers the disconnected pain of destruction with gentle directive intent. It seeps inside, although at time it meanders almost a bit too much from present family dynamics, stopping in on AIDS memories of “gaunt and bony men” walking past her Greenwich Village stoop in the 1980’s, back to one particular moment of locked up fear and abandonment. Some moments feel lived in, while others feel designed for affect, but the main familial trauma doesn’t get etched enough in detail and circumstance. It’s clear her childhood is damaged and torn, but the unsentimental vagueness is both a curse to the emotionality and a blessing to the humanity and authenticity of personal pain.

The story that unfolds is centered around a hospital bed and an arm chair, where Lucy spends nine weeks in uncertainty of her own survival. The scenic and costume design by Bob Crowley (West End/Broadway’s The Inheritance), with a concise sound design by John Leonard (Almeida’s Little Eyolf), sets the right tone, but the overly fussy shape shifting lighting by Peter Mumford (West End/Broadway’s The Ferryman) falters in a way that leaves Linney’s Lucy bouncing in and out of light and time. The simplicity and straightforwardness of the language would have been a good platform to emulate in this arena, but there is not enough faith in that component, as well as the video design by Luke Halls (Broadway’s Sea Wall/A Life), to let the focus lie where it truly belongs, on the shoulders of the play’s magnificently talented star and her ability to draw us through her story without effects.

Linny, with her clarity and rhythm, pulls us into her story, particularly when she wakes to find her mother, who she has not seen in far too many years, sitting in that armchair in the hospital room watching over her. Where will this go? The differing pathways are endless, and through Strout’s dark and familiar words describing all things small and ruthless, many roads are taken all at the same time. It’s intricate and complex, as there’s a desperate need of attachment and acknowledgement from within Lucy, most which will go unanswered or unheard. But there is something of a different sort; an engagement through gossipy story-telling, a sharp diligence of being present, and the clearness of a tortured look. They all give her dynamics to hold onto in those nine weeks that leaves her wanting and waiting for things that won’t come. The play builds strongly and quietly to the top of the hill., but it’s not the highest mountain, nor the sharpest of cliffs. The grade, though, is clear. Lucy Barton ends her story with precision, but sadly strolls forward for about two minutes too long, ending on an overly wordy moment of non-clarity that seems unworthy of the rest.