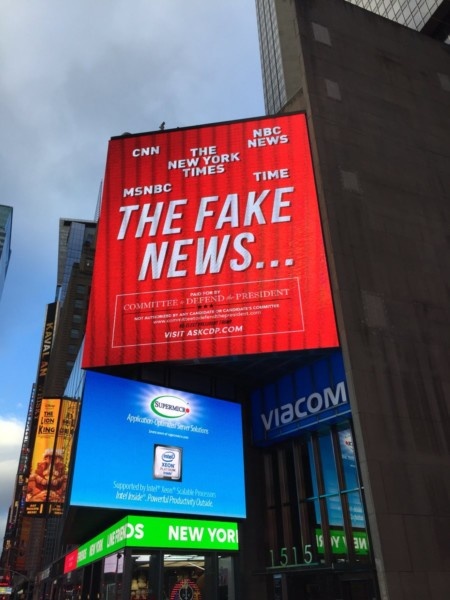 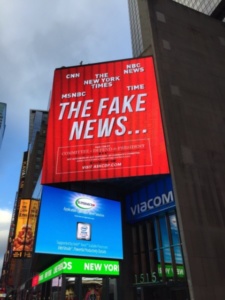 Seems even money can’t buy you billboard space in these politically charged times. An ad in Times Square attacking the “Fake Media” and alleged fundraising abuses by Hillary Clinton came down because building owner and Viacom were none too thrilled. The pro-Trump Committee to Defend the President paid for the digital ad outside 1515 Broadway, Viacom’s headquarters.

The building is owned by Stephen L. Green, who donated $100,000 to the Hillary Victory Fund, but Viacom, controls the ad space. Even though the ad had been approved, multiple complaints saw them exercising their right to cancel any campaign that receives complaints or negative feedback. The ad which was costing five-figure was supposed to run for the entire week, but only got a day.

The ad listed CNN, MSNBC, The New York Times, NBC News and Time above the words “The Fake News …”

The “second scoop” referred to a Times article  about how Donald Trump received two scoops of ice cream at a dinner where his guests got one.

The “ongoing FEC investigation” accuses Clinton’s 2016 presidential campaign of a “money laundering scheme and determine whether Clinton was involved in a “multimillion-dollar conspiracy”.

Hmm, does that mean anything that citizens now find offensive, will no longer be able to be up in lights in Times Square? Isn’t this censorship?