Moonshiner is a Howl at Chicago Musical Theatre Festival 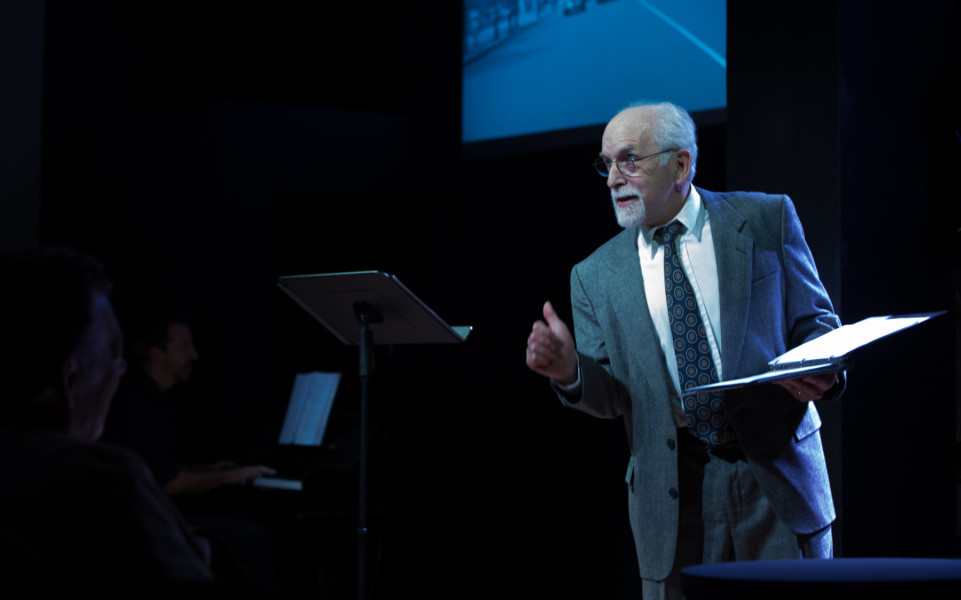 Moonshiner is a Howl at Chicago Musical Theatre Festival

There’s a full moon out tonight, and a terrible creature on the street. Yes, it’s Moonshiner, the noir-horror-comedy musical now playing at the Chicago Musical Theatre Festival in the Off Broadway space at the Edge Theatre.

I hate having to write reviews like this. I love both film noir and classic horror. The pitch was a great “high concept”: Noir thriller meets Teen Wolf. I went with such high hopes. But a great idea is one thing, and great execution is another.

Moonshiner is the solo writing effort of Bart Kuebler, who did book, music and lyrics; although his director, Chris Hanna, is credited with story assistance. Mr. Keubler, an experienced musical director, is clearly a superb musician, well versed in musical forms and genres. As keyboard player and conductor of the small band, he expertly presented his fine musical score, which alternates infectious jazz tunes with less complex but authentic sounding 50’s rock and roll. I also smiled at the high end gliss he would play subtly, every time a story clue appeared in the script. If you just go for the music, you’ll be happy as an eleven fingered piccolo player.

But like a lot of people who unwisely try to write musicals all by themselves, Mr. Kuebler is brilliantly talented in one area, and much weaker in the others. Both the structurally appalling lyrics and humorless, credulity-stretching book make this show a tough nut to swallow.

If you’re going to either parody or pay homage to a genre, you have to understand it first, and know how to mimic its identifying points. Particular to the noir genre are pulpy dialogue full of sexual innuendo and danger filled scenarios. You won’t find that in this show. Also, the language of noir is replete with colorful slang, stretched similies, and overripe metaphors. But there’s none of that in this show’s dialogue either, which generally lays there flatter than a matzoh underneath a fat lady.

The story starts out promising. Nicodemus Silver (Austin Book) is a Sam Spade-esque private dick in 1952. Young Mr. Book is sincere enough but not very interesting. He also is is as short as Alan Ladd without his apple box, which would have been funny to exploit. I suggest that Mr. Hanna give him one to carry around, and make him stand on it every time he has a scene with his taller leading lady. I’d come back to see that!

Nick says repeatedly that being a shamus for hire is just the day job. He really dreams of being a singer. However, Mr. Keubler fails to give Nick a song to express that at any time.

A blonde bombshell named Selene Orb (sultry Annie Nelson) sashays through Nick’s door with a problem as curvy as her figure. Her husband, a meek accountant, Peter Orb (devilishly handsome Trevor Early), hasn’t been coming home at night once a month, and she needs Nick to track him down in the moonlight.

Ms. Nelson is a ripe, red-lipped tomato with eyes as deliberately shifty as her hips, suggesting the perfect noir heroine in distress. She was definitely worth importing from NYC for this show.

Nick questions Orb’s boss at Lycos Insurance, and the barkeep at the Three Moons Pub, among others, about when they last saw him. All the supporting characters are played by the infinitely versatile Gordon Stanley. He is a crackerjack professional actor of 40 plus years who has more voices than Carter has pills. “They” all tell Nick that Orb disappears once a month for a couple days when the moon is full, then comes back looking like he slept in his clothes. Hmmm…!

Nick then attempts to tail Orb far too obtrusively, by getting a temporary job at a desk next to his, until Orb, continually noticing, takes it on the lam. That’s a funny idea. But the scene is done as a pantomime sequence with title cards, ragtime piano, and the sound of a projector in the background, as if we were watching a silent movie. What do the silent movies have to do with the era of Mickey Spillane? Nothing, of course. So it sticks out like a rusty nail, and I don’t mean the cocktail.

The talented Mrs. Orb sings in a club where once a month, a handsome, leather jacketed, bad boy rock and roller, Peter Rock (who bears an uncanny but unacknowledged resemblance to the errant husband) comes in to sing a number of his own. When he turns up the faux-Elvis heat, Mrs. Orb pants over him like a thirsty dog with bad asthma, before he bolts unexpectedly.

Later, Nick follows Orb to a dark alley in the moonlight, where Orb musically and magically morphs into the werewolf/singer, Peter Rock. A lot of contradictory details are glossed over in this key scene. At the club, Rock had no furry tail. But here he does. He also sings about his pointy ears, which we don’t see. Is this The Nutty Professor or The Wolfman?

Nick then hatches a scheme to reunite Orb with his concerned wife. But we learn later that Nick is from the “old country”, ”, and he can’t escape his real calling as a werewolf killer.  So what’s he doing helping Orb instead of shooting him with a silver bullet when he has him cornered?  This, like much that follows, made no sense. But my credibility got stretched like a piece of Bazooka bubble gum, when a fleeting quip about a “jig” led bang on into a song describing an ancient Irish legend which reveals Mrs. Orb’s dark secret.  I won’t spoil the ending, or injure myself trying to describe it. But it all comes down to a deus ex machina, which is Latin for “pull it out of your ass” when you have run out of ideas as a writer.

As for the lyrics, one would think Mr. Kuebler has never listened to any of the words to any of the songs he has been playing for forty-odd years. Most classic pop and jazz standards are in AABA song form. Mr. Kuebler knows this form musically, but his lyrics are a structural disaster. In that song form, a repeated lyric hook will typically either begin each stanza (“Three Coins in a Fountain”) or end it (“People Will Say We’re In Love”).  This helps audiences know the central idea of the song, and be able to follow  it.  Mr. Kuebler apparently has no awareness of that concept, as he never writes any such hooks for his tunes. His lyrics just stumble along directionless, like a drunken sailor.   He does better with the couple of verse-chorus rock songs for Peter Rock. But his music and lyrics still go together as poorly as J. Edgar Hoover in a dress.

At seventy-five minutes in one act, at least the show doesn’t overstay its welcome.   But Mr. Keubler should realize that he has bitten off more than his inner werewolf can chew, and find himself some collaborators with complementary talents if he wants his show to move forward.

So, if a sexy actress and fine jazz music are enough to get you to brave the cold, knock back a couple and go see Moonshiner.  It’ll put hair on your chest!