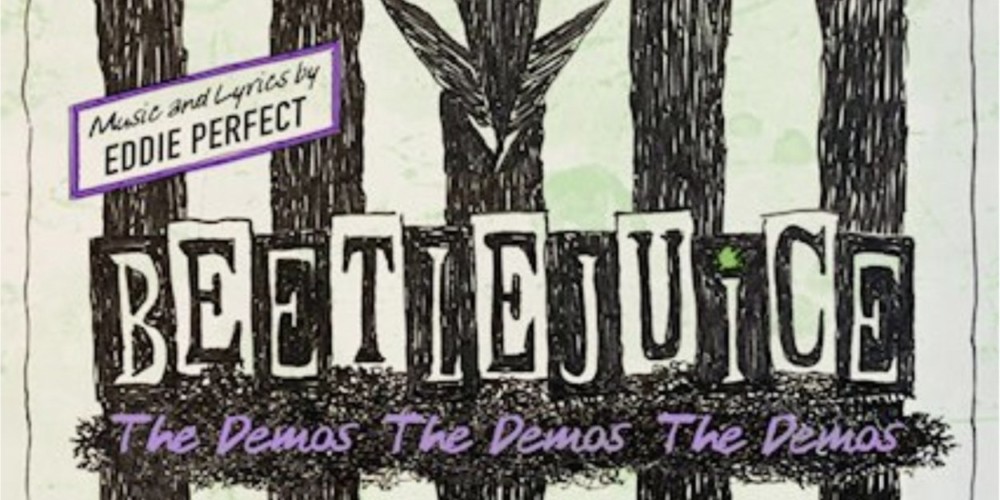 Ghostlight Records announced that the new album from Eddie Perfect, Beetlejuice – The Demos! The Demos! The Demos! were available as a Halloween surprise in digital and streaming formats. Resurrecting his original demo recordings for the Tony Award-nominated score of Beetlejuice the Musical, the show’s composer and lyricist performs 24 out-of-this-Netherworld tracks.From the original demo of “The Whole Being Dead Thing” that seduced director Alex Timbers into offering Eddie the composer gig to “Mama Would,” a cut song that was written for Lydia to memorialize her mother, to the original demo of the viral TikTok hit “What I Know Now,” this album is a treasure trove of treats for every Beetlejuice fan. Beetlejuice: The Demos! The Demos! The Demos! is accompanied by track-by-track commentary from Eddie Perfect available on Spotify and YouTube telling behind-the-scenes stories of each song, recalling why some were cut, how selections changed in the process of the show’s development. Beetlejuice was nominated for eight 2019 Tony Awards, including “Best Musical.” To download or stream the album, produced by Eddie Perfect, please visit EddiePerfect.lnk.to/BeetlejuiceDemos

Ghostlight Records and Joe’s Pub will present a free virtual celebration of the new album The Liz Swados Project on Tuesday, November 24 at 8:00 PM Eastern. The event will feature several of the performers who appear on the album, offering singular musical performances and personal insights into Swados’ work. Highlights include the world premiere of a special new music video produced, directed and starring Sophia Anne Caruso, in addition to new studio videos from Damon Daunno, Amber Gray, Stephanie Hsu, Grace McLean, Alicia Olatuja, Ali Stroker, and Taylor Mac. The evening will feature a special appearance by Swados collaborator Utkarsh Ambudkar (Freestyle Love Supreme, Pitch Perfect) and rare footage of Swados herself on the Joe’s Pub stage. The album is currently available on all platforms. Hailed as “a stunning new anthology album” by American Theatre Magazine, The Liz Swados Project – a newly-recorded tribute to the visionary artist – features an epic family of performers, composers and lyricists, who have been influenced and inspired by Swados as a performer, composer, lyricist, teacher, and trailblazer. After the event, the program will be available on the venue’s YouTube channel for two weeks. For more information on the Joe’s Pub online event, please visit the venue’s website HERE.

A moving music video for the song “We Are Not Strangers,” with a timely message for the nation, is performed by Heather Christian and features several of the album’s performers participating from home.

A sensational online cabaret series! Hosted by 5-Time Grammy Award Nominee Michael Feinstein. Directed by MAC Award Winner Barry Kleinbort. Online performances are each week, with a premiere showing with Alton Fitzgerald White on Wednesday, November 4at 7:00 PM. Encore performances are scheduled for Thursday afternoon at 2:30 PM, Friday at 7:00 PM and 10:00 PM and Saturday at 2:30 PM and 7:00 PM.

Seen on this episode in Loving Memory of………….

The musicians on this episode include:

The performances were filmed over thirty years starting in 1990 at Steve McGraw’s, Caroline’s on Broadway, Laurie Beechman Theater at West Bank Café, The Lighthouse, Rainbow and Stars and Don’t Tell Mama. Jamie deRoy & friends is directed by Barry Kleinbort and edited by Russell Bouthiller. The performances were videotaped by the late Bradshaw Smith (April 14, 1954 – January 16, 2012).

Jamie deRoy & friends will air on Sunday, November 8 at 7:30 PM on Spectrum Channel 56, RCN Channel 83, and Verizon FIOS Channel 34, as well as on East Hampton LTV Channel 20 at later dates.

Suzanna BowlingDecember 27, 2021
Read More
Scroll for more
Tap
Music News: Lala, Andrew Lloyd Webber’s Cinderella: The Musical, I Put A Spell On You and If The Fates Allow: A Hadestown Holiday Album,
What To Watch November 2nd To Take Away The Blues