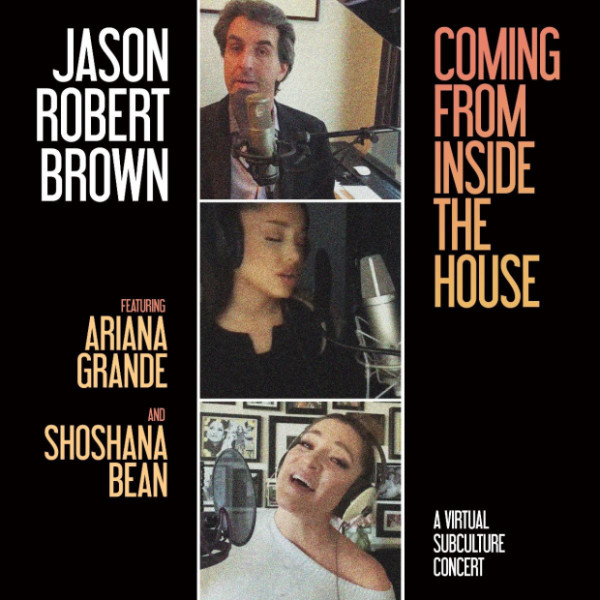 Happy holidays for those who love Jason Robert Brown. Craft Recordings and Concord Theatricals will release Ariana Grande and Shoshana Bean singing Brown’s music in Coming From Inside the House (A Virtual SubCulture Concert) on Friday, December 18th.

The album is a remastered recording of Brown’s streaming SubCulture concert from April 27, 2020. Bean will sing “The Hardest Hill” and Grande performs “Still Hurting” from The Last Five Years, as well as the songs “Sanctuary” (with Georgia Stitt, Molly Cate Brown, and Susannah Brown), “Melinda,” “I Love Betsy” from Honeymoon in Vegas,” and “All Things in Time. A bonus track from the world premiere recording of “Nothing’s Bigger Than Kong,” commissioned for but was not included in the 2018 Broadway musical King Kong.

You can get the album here.

LOVE, REPEAT, is a romantic family comedy film directed by Shelagh Carter and written by Bill Connington (Poughkeepsie is for Lovers, Zombie Off-Broadway). The film will be available to rent and own on Amazon, FandangoNOW and other North American digital HD internet, cable and satellite platforms and DVD on December 22 through Freestyle Digital Media, the digital film distribution division of Byron Allen’s Entertainment Studios.

What if the love of your life is your ex-wife? That’s what James realizes as he stumbles through the strange ritual of New York dating. With the help of his sarcastic 11-year-old-son and his quirky and diverse circle of family and friends, James sets out to win Barbara’s heart, again, before she marries another man. An uplifting Manhattan romance, LOVE, REPEAT reminds us that sometimes the past is yet to come.

Hershey Felder Presents – Live from Florence continues its 2020-2021 season with a special holiday performance of Hershey Felder Tchaikovsky, which will be live streamed from Florence, Italy on Sunday, December 20, 2020 at 5:00 PM PT / 8:00 PM ET. Streaming On Demand this show will also be available from December 21-27, 2020.

Proceeds from Hershey Felder Tchaikovsky will benefit over 20 national and international theatres, arts organizations and publications. Felder is also pleased to announce that he will partner with The Actors Fund, the national human services organization that serves the entertainment community, for the creation of a fund to help provide emergency financial assistance to the entertainment and performing arts professionals impacted by the current health crisis, and beyond. Tickets ($55 per household) are available for purchase at the following link: Eventbrite. 100% of proceeds from tickets purchased at this link will go to benefit The Actors Fund

Selections from an array of Tchaikovsky’s music, including the ballets Swan Lake and Sleeping Beauty, the 1812 Overture, Piano Concerto no. 1, and his brilliant symphonic works. The show also features iconic locations in Florence that were significant in the composer’s life, as identified in letters he wrote between the years 1874-1890. These include Villa Bonciani, the actual residence Tchaikovksy lived in and where he composed his Suite No. 1 in 1878, as well as the Piazalle Michelangelo, Museo Bellini, Palazzo Pitti, Ponte Vecchio, Tornabuoni, and locations along the Arno River.

Suzanna BowlingJanuary 13, 2022
Read More
Scroll for more
Tap
Theater News: A King And No King, Off-Broadway League Toy Drive, Williamstown Theatre Festival, Theatre for One
What To Watch December 18th To Take Away The Blues