Moscow Times 6 is Like Watching a Kids in a Sandbox 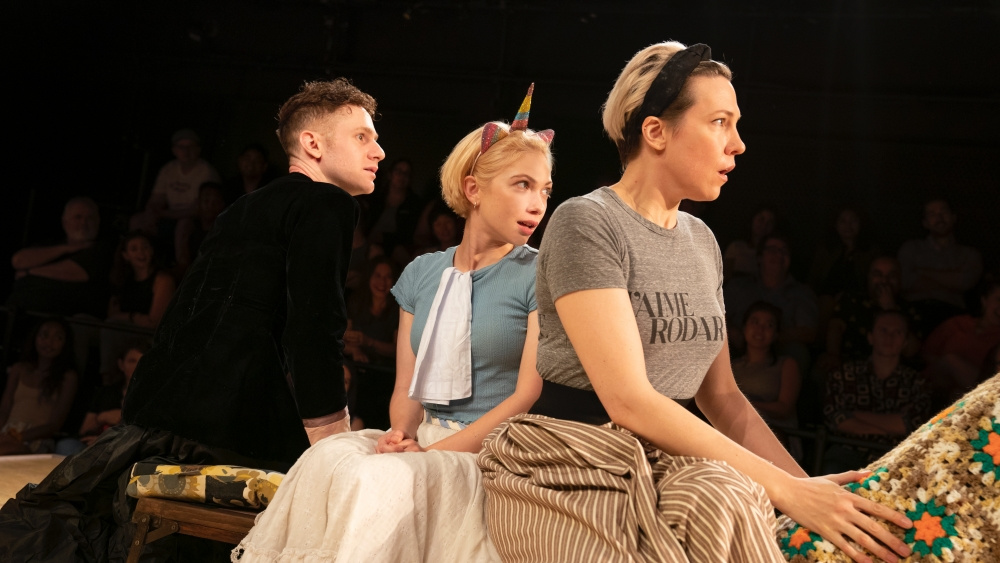 Moscow Times 6 is Like Watching a Kids in a Sandbox

As a disclaimer before I write this review, I am not a fan of crass, profane, bawdy material, that puts others down and has no heart. Hailey Feiffer’s take on Chekov’s The Three Sisters, Moscow, Moscow, Moscow, Moscow  Moscow, Moscow now playing at the MCC Theatre Space will appeal to some and not to others. Gone is the innocence, sincerity to be replaced by entitlement and cattiness.

The sisters Olga (Rebecca Henderson), Masha (Chris Perfetti) and Irina (Tavi Gevinson) are desperate to get out of the countryside where they have been imprissioned and long for Moscow. Olga is a teacher at the high school who psychotic keeps telling us how hideously unattractive she is over and over again. She longs for a man but as a spinster she states she will marry “any man, even an old man if he had asked” her. Masha is moody, tortured diva who hates her husband (Ryan Spahn), who adores her, as she longs for the married Vershinin (Alfredo Narciso). Irina pursued by Tuzenbach (Steven Boyer) and Solyony (Matthew Jeffers) screams “Does everyone think I have a golden PUSSY or something?!” You can actually understand her point, because she thinks as do all the sister that Tuzenbach is gay and Solyony, is just weird and seems bipolar. As the sisters sit in judgment of everyone they sardonically “Ha! Ha! Ha!” or place whoopee cushions to break up the monotony.

Anfisa(Ako) is the maid that Natasha wants to fire.

The set by Mark Wendland is inventive and looks like a sandbox for kindergartners. The costumes by Paloma Young, uses expensive sneakers, celebrity t-shirts and a Cats hoodie, perfect for millennials.

Goldberg is movingly as Natasha and we feel her grief, though in the MeToo movement and women fighting for roles, in a show where there are 7 roles for men, why switch this up? It wasn’t done that way when it first was done in the Berkshires. The cast though is wonderful and seems to be having a good old time with the material. It’s as if they are doing sketch comedy for “Saturday Night Live”. Matthew Jeffers, Gene Jones and Ray Anthony also add to this piece. I appreciated Alfredo Narciso low key approach, as he gave breath to this fast-paced, frenetic rollercoaster directed by Trip Cullman, who made me feel as if I were watching acting exercises by advanced actors.

This play about uncertainty, yearning, despair and class struggles has been diminished to the level of 95 minute episode of “The Simpsons”. Many will like this production, my guest and I did not.