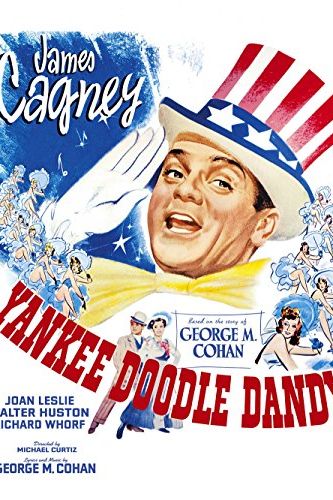 Yankee Doodle Dandy (1942) A musical portrait of composer/singer/dancer George M. Cohan. From his early days as a child-star in his family’s vaudeville show up to the time of his comeback at which he received a medal from the president for his special contributions to the US, this is the life- story of George M. Cohan, who produced, directed, wrote and starred in his own musical shows for which he composed his famous songs. Starring James Cagney

1776 (1972): Molasses To Rum performed by John Cullum is one of the only songs ever written about the triangle trade.The powerful song not only delves into the horrors of the slave trade but also addresses the hypocrisy of the Northern colonies by calling attention to their participation in slavery. The film stars William Daniels, Howard Da Silva, Donald Madden, John Cullum, Ken Howard and Blythe Danner.

Mr. Smith Goes To Washington (1939) a political comedy-drama film directed by Frank Capra, starring Jean Arthur and James Stewart, and featuring Claude Rains and Edward Arnold. The film is about a newly appointed United States Senator who fights against a corrupt political system, and was written by Sidney Buchman, based on Lewis R. Foster’s unpublished story “The Gentleman from Montana”. The film was controversial when it was first released, but successful at the box office, and it made Stewart a major star. It was also loosely based on the life of Montana U.S. Senator Burton Wheeler, who underwent a similar experience when he was investigating the Warren Harding administration.

The American President the 1995 American romantic comedy-drama film directed and produced by Rob Reiner and written by Aaron Sorkin. The film stars Michael Douglas, Annette Bening, Martin Sheen, Michael J. Fox, and Richard Dreyfuss. In the film, President Andrew Shepherd (Douglas) is a widower who pursues a relationship with environmental lobbyist Sydney Ellen Wade (Bening) – who has just moved to Washington, D.C. – while at the same time attempting to win the passage of a crime control bill during a re-election year.

Born on the Fourth of July (1989) American biographical anti-war drama film based on the eponymous 1976 autobiography by Ron Kovic. Directed by Oliver Stone, and written by Stone and Kovic, it stars Tom Cruise, Kyra Sedgwick, Raymond J. Barry, Jerry Levine, Frank Whaley, and Willem Dafoe. The film depicts the life of Kovic (Cruise) over a 20-year period, detailing his childhood, his military service and paralysis during the Vietnam War, and his transition to anti-war activism. It is the second installment in Stone’s trilogy of films about the Vietnam War, following Platoon (1986) and preceding Heaven & Earth (1993).

Young Mr. Lincoln (1939)  the early life of President Abraham Lincoln, directed by John Ford and starring Henry Fonda. Ford and producer Darryl F. Zanuck fought for control of the film, to the point where Ford destroyed unwanted takes for fear the studio would use them in the film. Screenwriter Lamar Trotti was nominated for an Academy Award for Best Writing/Original Story.