Movies to Tempt This Fall

Movies to Tempt This Fall 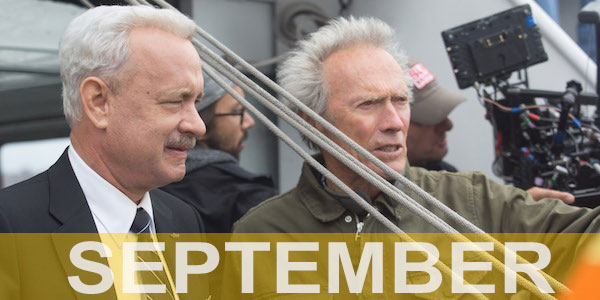 “Rogue One: A Star Wars Story,” “Fantastic Beasts,” Marvel’s latest Doctor Strange,“ Antoine Fuqua’s star-packed reboot of “The Magnificent Seven, “ Jennifer Lawrence and Chris Pratt in the hot space romance “Passengers,” to the big screen adaptations of the bestselling novels The Girl on the Train and The Light Between Oceans this fall is full of movies we can’t wait to see. From September to Christmas, audiences will be treated to Brad Pitt as a sexy spy, Ben Affleck as a nerdy accountant/assassin and Tom Hanks in not one, but two flicks. This is our top picks for the upcoming season.

The Light Between Oceans (9/2): More Oscar nods seem assured for Michael Fassbender and Alicia Vikander, in this much-anticipated adaptation of the popular novel.  In post-WWI Australia, the childless and married lighthouse keepers discover a baby girl and raise her as their own — until the birth mother appears.

Blair Witch (9/16): She’s back, but this time Adam Wingard directs this follow-up, which centers on college students investigating the legend of the infamous witch and the disappearance of James’s sister. Perfect pre Halloween material.

The Magnificent Seven (Sept. 23): Denzel Washington and Ethan Hawke reunite with director, Antoine Fuqua, for this remake of the classic western about mercenaries who come to the aid of a small town. Along for the ride. Chris Pratt as an explosive-loving gambler.

Storks (Sept. 23): This adorable animated film has storks delivering packages for an online megastore. When a machine starts accidentally churning out babies, they are back on the delivery route. Voiced by Andy Samberg and Jennifer Aniston.

Queen of Katwe’(9/23)David Oyelowo and Lupita Nyong’o star in this inspirational biopic about Phiona Mutesi (played by Madina Nalwanga), who grew up in the Ugandan slum of Katwe and became the world’s first female chess master.

Deepwater Horizon (9/30): Mark Wahlberg stars in the story behind the devastating explosion on the titular offshore drilling rig in 2010.

Miss Peregrine’s Home for Peculiar Children (9/30): Tim Burton, directs this adaptation of the popular novel. Eva Green stars as the birdlike Miss Peregrine and Asa Butterfield is the lad who comes to work for her. She helps him discover his “peculiar.

Denial (9/30) Irving (Timothy Spall) wages a legal battle against historian Deborah E. Lipstadt (Rachel Weisz) after she accuses him of denying the Holocaust.

The Birth of a Nation (10/7): Nate Parker not only stars in this festival hit, he also wrote and directed it. Parker playing Nat Turner, who led a violent slave uprising in 1831 Virginia. The stirring drama premiered at Sundance, where it won the Audience Award and the U.S. Grand Jury Prize.

The Girl on the Train (10/7): Emily Blunt stars in this thriller (based on the book that was hailed as “the next ‘Gone Girl’”). A lonely divorcée rides the train to and from work each day. One day, she spies something disturbing from her window seat and is soon caught up in a woman’s mysterious disappearance.

The Accountant (10/ 14): Ben Affleck is a math whiz and a forensics accountant who “un-cooks the books” for criminal organizations. He’s also very handy with a gun.

Jack Reacher: Never Go Back’ (10/21) Tom Cruise returns as Jack Reacher, a man who goes back to his old military unit. He’s accused of murder and discovers a military conspiracy.

A Monster Calls: (10/21): A 12-year-old boy (Lewis MacDougall) deals with his mother’s illness and bullies at school by living in a world of fairy tales and monsters.Sigourney Weaver, Felicity Jones, Liam Neeson and Geraldine Chaplin star.

Inferno (10/28): Is the film we have been waiting for. This religious thriller is based on the best-selling book. While still suffering from amnesia, symbologist Robert Langdon (Tom Hanks) and his doctor (Felicity Jones) race against the clock and across Europe to foil a deadly plot that will help prevent an coming apocalypse.

Trolls (11/4): Justin Timberlake voices a grumpy troll survivalist and Anna Kendrick is the giddy Princess Poppy who team up to save Troll Town. James Corden also lends his voice talent.

Loving (11/4): Joel Edgerton and Ruth Negga (AMC’s “Preacher”) star in the true story of Richard and Mildred Loving, the plaintiffs in the 1967 U.S. Supreme Court decision that overturned the law against interracial marriage. The film premiered at Cannes, where it received a standing ovation.

Arrival (11/11): Amy Adams is a linguist brought in to communicate with alien life residing in football-shaped spaceships.

Billy Lynn’s Long Halftime Walk (11/11): Ang Lee directed this adaptation of the novel about an Iraq war hero who’s sent on a “Victory Tour” around the U.S., including a big Dallas Cowboys game. Manchester by the Sea’ (11/ 18) Casey Affleck must raise his teenage nephew after the death of his brother in this Sundance hit from writer-director Kenneth Longergan. Oscar buzz is strong on this one.

Fantastic Beasts and Where to Find Them (11/18): This is the most anticipated film of the year thanks to it’s author J.K. Rowling.  It is a spin off the Harry Potter series. Here magizoologist Newt Scamander (Eddie Redmayne) must track down an array of magical creatures in 1926 New York.

Nocturnal Animals (11/18): Jake Gyllenhaal is a character from a disturbingly violent novel that haunts Amy Adams. She believes it’s a veiled threat from its author, who happens to be her ex-husband (Armie Hammer).

Allied (11/23): Brad Pitt and Marion Cotillard are really, really ridiculously good looking spies. Of course they fall in love in this WWII thriller.

Rogue One: A Star Wars Story (12/16): Felicity Jones and Diego Luna are rebels determined to steal the plans to the Death Star before it can be built.

Sing (12/21): The studio behind “Despicable Me” and “The Secret Life of Pets” has an all-animal singing competition. Reese Witherspoon, Seth MacFarlane, Scarlett Johansson and Matthew McConaughey star.

La La Land (12/2): Emma Stone and Ryan Gosling together singing and dancing all over Los Angeles!

The Founder(12/ 16): Michael Keaton plays Ray Kroc, the man who took McDonald’s from a small hamburger stand to the most successful fast food chain in the world.

Michael Fassbender is both an ancient assassin and his descendant in this movie based on the Ubisoft videogame. Marion Cotillard also stars

Passengers (12/21): Chris Pratt and Jennifer Lawrence in space! With a hot sex scene! What more do you need to know?