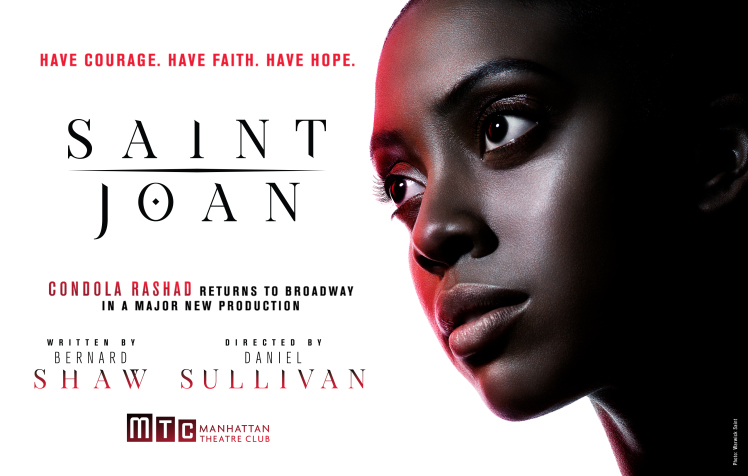 The chimes, they are trying to sing on the Samuel J. Friedman Theatre stage for the Manhattan Theatre Club‘s revival of the classic Bernard Shaw play, Saint Joan.  They are announcing the return of Condola Rashad to the Broadway stage after her celebrated and Tony-nominated run last season in A Doll’s House, Part 2 along  side the incomparable Laurie Metcalf (also back on Broadway in the magnificent Three Tall Women).  Rashad is tackling one of the most challenging parts for a stage actress, playing the 15th century French military figure Joan of Arc, a simple peasant girl who claims to have divine interventions from Saint Margaret, Saint Catherine, and the archangel Michael. She states with a passion that borders on religious fanaticism, that the voices  were sent by God to guide her conduct, leading her to assemble an army against the English. With what seems like the wind of God behind her, she triumphs at a few battles, crowns a King, but is berated for her “sin of pride” by the Archbishop of Rheims, played by the wonderful John Glover (MTC’s Love! Valour! Compassion!). After she is caught and imprisoned, she is brought to court, charged with heresy, and burned at the cross, only to be canonized by the Roman Catholic Church hundreds of years later. Ironically, this happens just three years after Shaw’s play premieres in 1923 at the Garrick Theatre on Broadway by the Theatre Guild with Winifred Lenihan in the title role, and with that, the lure and the power of Saint Joan was reborn.

For many, the role is thought to be one of the most challenging to interpret. The list of celebrated and very experienced actresses who have taken on the role is long and impressive, with most being much older than the young teenage character.  The acting guru, Uta Hagen played the part at the Cort Theatre, New York, October 1951 – February 1952, as did Joan Plowright in London, 1963, Lynn Redgrave at the Circle in the Square, New York, November 1977 – February 1978, and Imelda Staunton in London, 1979. It is Rashad’s chance to join this lustrous crew, but tragically, she finds herself in an uninspired production that drives itself into the ground. She gives a feisty but one-note characterization void of dimension and variance, much like the production as a whole, telling us the story, but never giving us a good reason to care.  There is no point of view or raison d’être to be found in these French fields, leaving Rashad blind and wandering like those other famous tragic fools, the Earl of Gloucester and his King Lear.

As directed by Daniel Sullivan, the man behind last season’s gloriously rich The Little Foxes, he has failed with this play, following the story with too straight a purpose but no overall imaginative form or purpose.  There doesn’t seem to be a master plan for finding an internal locus of meaning that would elevate the telling of this tragic tale to something beyond the historical. The cast for Shaw’s self-characterised “Chronicle Play in 6 Scenes” and an Epilogue, is made up of an army of seasoned pros trying their best to wring out some music and passion from the piece, such as Patrick Page (NYTW’s Hadestown) as one of the first to fund Joan’s journey and believe in her divine connection, and Adam Chanler-Berat (Broadway’s Peter and the Starcatcher, Next to Normal) as the weak and vain Dauphin, the man who Joan’s voices have commanded her to help be crowned the true king by driving out the English occupiers and restore France to greatness. With this Dauphin, flattery will get you pretty much anywhere, except maybe a more positive review.

As the soldier and leader, Dunois, Daniel Sunjata (Tony nominated for Take Me Out) delivers the commanding goods when the inspiring winds change and help bring them to glory. And he is also the man who warns her that if she is captured on a foolhardy campaign, no one will come to her rescue. Walter Bobbie (Broadway’s Guys and Dolls, Anything Goes) sadly hangs up his directing hat (Bright Star, Venus in Fur) and portrays the Bishop of Beauvais, who comes to believe that Joan is a threat to the power of the Church, undermining its universal rule by instilling national pride within the people. Joining with the Chaplain de Stogumber (Robert Stanton) and the Earl of Warwick, played with zeal by the irresistible Jack Davenport (Almeida’s Enemies, TV’s “Smash“), they are at a loss of what to make of Joan’s success and rising power.  Warwick, the most convincing and devilishly entertaining portrayal on the stage, sees her work as an attempt to strip him and other feudal lords of their power by creating a system in which the king is only responsible to God, and within that fear, they all agree she must die. And the rest is history, as they say.

Staged with a shimmering gold backdrop, we find ourselves trapped and surrounded by the musically silent church’s organ pipes. The set, designed by Scott Pask (MTC’s The Father), with similarly crafted lighting by Justin Townsend (Broadway’s The Humans) is beautiful to look at, feeling regal, majestic, and holy, but it is as soulless as the production itself.  Boring the procedure by its flatness that does little to add dynamic energy to this Saint Joan. So much talk with so little movement or compelling drama, it drives this piece down to a painfully glacial pace, creating only static vibrations that seem to stall everyone, including the sound design by Obadiah Eaves (MTC’s The Portuguese Kid) with original music by Bill Frisell adding no luster. The costumes, by the usually inventive Jane Greenwood (Broadway’s The Parisian Woman) feel cartoonish, as if they were borrowed from the Medieval Times Dinner and Tournament Theater, creating another distraction to the stagnant tone of this well-meaning play. Rashad and company are abandoned, just like the religious icon at the center of this power battle.

Joan is the personification of the tragic heroine. Shaw studied the transcripts of the infamous trial and decided that those involved acted in good faith according to their beliefs. He wrote in his preface to the play: “There are no villains in the piece. Crime, like disease, is not interesting: it is something to be done away with by general consent, and that is all [there is] about it. It is what men do at their best, with good intentions, and what normal men and women find that they must and will do in spite of their intentions, that really concern us“.  The only villains here, I’m sad to report, may be the director and the design team, but with the same sense of solidarity, those involved, most assuredly, also acted in good faith, just sadly, not guided with a strong battle plan.  Maybe, like Joan, they thought God had their backs and would grant them a victory like they did to her (Rashad did get a Tony nomination for the performance).  It worked at the beginning of this tale, but just like the ending, Joan goes down in flames.

T. S. Eliot once wrote after its premiere in London in 1924, that Saint Joan was not the masterpiece that many claim it is. He credited Shaw with providing an “intellectual stimulant” and “dramatic delight” in its construct, but took issue with his portrayal of the heroine, turning her into a great middle-class reformer, rather than a saint. It’s a complicated history play, that dramatizes what is known of this woman’s seemingly passionate and over-zealous religious inner-life. It’s filled with dramatic purpose with smart and interesting creations, but is drawn out and bogged down in style, rhetoric, and heavy armor.  The epilogue, probably the most engaging scene in the entire 2 1/2 hours of painfully anemic pacing, finally pulls us in to the humanity of these characters, shaking away the stagnant halls of justice, and into the bed of King Charles VII. In a dream state, the cast of concerned dead man come together, perching playfully on the bed. They have gathered together, including a very funny English soldier (Stanton) to tell Joan of their trials, tribulations, thoughts, and concerns, joyfully greeting the news of her canonization, but warning her that the world is still not prepared nor will it ever be ready to receive a saint such as herself.  And I can attest to that, with the same being said about this draggy production.