The United Nations Development Programme (UNDP) has appointed legendary musician and founding member of the Grateful Dead and Dead & Company Bob Weir as its newest Goodwill Ambassador. The ceremony will take place during the eighth annual Social Good Summit at the 92nd Street Y in New York City.

In this new role, Weir will be teaming up with UNDP to raise awareness and mobilize support for the UN agency’s work to end poverty while fighting climate change.

Weir will help UNDP shine a spotlight on the important role climate action plays in achieving the Sustainable Development Goals, which were agreed upon by world leaders to protect the planet and achieve a brighter future for all.  Weir will help UNDP advocate for climate initiatives and projects that promote renewable energy, preserve coastlines, combat deforestation and ensure a healthy planet for generations to come.

“I am most honored to join the United Nations Development Programme as a Goodwill Ambassador,” Weir said. “I am looking forward to working with UNDP to raise awareness of the grave issues and enormous opportunities affecting our planet and I hope to inspire others to join us. Together we can help keep our planet healthy and prosperous for future generations.”

“I will be a strong advocate for crucial climate initiatives and renewable energy, and for the world’s oceans, coastlines and forests,” Weir said. “We all need to ensure we fight to make the planet a better one for the generations that follow us.”

“I am delighted to be teaming up with Bob Weir to combat climate change and promote the Global Goals around the world. Bob’s particular passion for preventing deforestation will be critical in the fight for our planet, as deforestation and forest degradation account for more than 10% of global greenhouse emissions.  Please join me in welcoming him to the UNDP family.”

As his first act as UNDP Goodwill Ambassador, Weir spoke about climate change and the use of technology to mobilize action to protect the planet at the Social Good Summit. 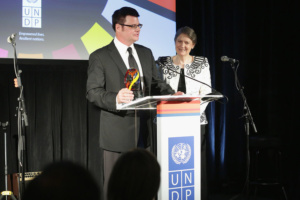 Weir was joined on stage by Jeff Martin, CEO of Tribal Planet, a Silicon Valley mobile digital disruptor, bringing together a broad ecosystem of public and private sector organizations to deliver social impact.

Bob Weir is one of the founding members of the legendary Grateful Dead, which received a GRAMMY Lifetime Achievement Award in 2007. Since establishing the band in 1965, Weir has become one of rock’s finest and most distinctive rhythm guitarists. In 2016, he received the inaugural Les Paul Spirit Award and was honored with Lifetime Achievement Award from the Americana Music Association. Also in 2016, Weir released Blue Mountain on Columbia/Legacy/ROAR, his first album of solo material in more than 10 years and his first album of entirely original material in more than 30 years. The album received raves from critics including NPR who called the LP “stately, autumnal, metaphysical cowboy songs.” Weir is currently a member of Dead & Company which features Grateful Dead members Mickey Hart and Bill Kreutzmann along with GRAMMY-winner John Mayer, Oteil Burbridge and Jeff Chimenti. Weir was the subject of the 2015 Netflix documentary The Other One: The Long Strange Trip of Bob Weir, which chronicles his storied career. Released in summer 2017, Amazon Studios’ Long Strange Trip—Amir Bar-Lev’s critically acclaimed documentary about the Grateful Dead—is currently streaming on Amazon Prime as a six-part series.

UNDP partners with people at all levels of society to help build nations that can withstand crisis, and drive and sustain the kind of growth that improves the quality of life for everyone. On the ground in nearly 170 countries and territories, we offer global perspective and local insight to help empower lives and build resilient nations. www.undp.org.

The UN General Assembly Causes Massive Street Closures
My View: No Music On Yom Kippur? The 92Y Has A Big Dose The Day Before