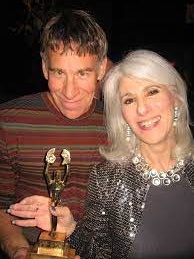 Performers include: Jamie deRoy, Sarah Jane McMahon, Larry Gatlin, Ian Herman, Gregg Edelman and Special Guest: Three-time Academy Award Winner Stephen Schwartz. Stephen won Song of the Year for “Colors of the Wind” from “Pocahontas“( 1995) with Music by Alan Menken and Lyric by Stephen. That year, they also won for Best Score. Then he won again for his song “When You Believe” from “The Prince of Egypt” (1998), for which he did both Music and Lyric, this brought Stephen to three Academy Awards!

Musicians on this episode include Lanny Meyers, Larry Gatlin, Ian Herman, Christopher Denny and Stephen Schwartz. The footage is culled from shows done at Dillon’s, The Metropolitan Room and Birdland from 2004-2010.

Jamie deRoy & friends is directed by Barry Kleinbort and produced and edited by Russell Bouthiller.

On May 13, vocalist, dancer and interdisciplinary artist Migguel Anggelo and his longtime Musical Director and collaborator Jaime Lozano will premiere an online glimpse into the development of their ambitious new project, English with an Accent (EWaA). EWaA will ultimately take the tripartite form of a dance-theater live performance, a series of short online films and a musical album, but for this early and intimate show-and-tell, the artists will publicly premiere a fully-produced video presentation of the work, including several first drafts of the films and a number of final drafts of songs that were created during Anggelo’s recent residency as a New York Presenters Consortium artist. The performance will feature Joel Mateo on drums and percussion. This free streaming performance is a part of Greenwich House Music School’s Uncharted music series, presented in conjunction with Joe’s Pub. English with an Accent will air on Joe’s Pub’s YouTube channel, then remain available on demand through the following weekend.

The story of EWaA centers around a newly emigrated caterpillar in New York City, unsure of which direction his life is taking. Is he really a caterpillar, or just a lowly worm? Will he become the butterfly of his dreams? And what does it mean to become a butterfly in the first place? This work explores the promise of the American Dream through themes of freedom, safety and self-worth. Anggelo and Lozano will provide an insightful and engaging evening of the work in progress with a look under the hood at the music, visuals and artistic ingenuity devoted to building English with an Accent thus far.

Lisa Yaeger is a 2018 Bistro Award winner for Outstanding Vocalist. She was nominated for a MAC Award for her debut show It Must Have Been Love in 2014. Her critically acclaimed new show Jersey Girl ran for 5 performances in 2017 and was nominated for a Broadway World Award for Best Show of the Year.

Lisa was recently named 1st runner up in the inaugural season of Mama’s Next Big Act at NYC’s Don’t Tell Mama. She is a regular performer at The Metropolitan Room, The Laurie Beechman, 54 Below, Pangea and Don’t Tell Mama.

On Saturday May 15th at 7pm. Lisa will be performing in Bloomfield, NJ as a part of NiCori Studio and Productions Series, Music at the Mansion Porch Perfences. A summer long outdoor concert series featuring Broadway, Cabaret and Television Stars. What an honor to be among this roster of incredible performers.

Click HEREto order tickets for in person with an option for dinner and the show. OR Click HERE to order your virtual tickets.

Jeffery Lyle SegalOctober 16, 2021
Read More
Scroll for more
Tap
What to Watch in The New Year: April 14
The Glorious Corner