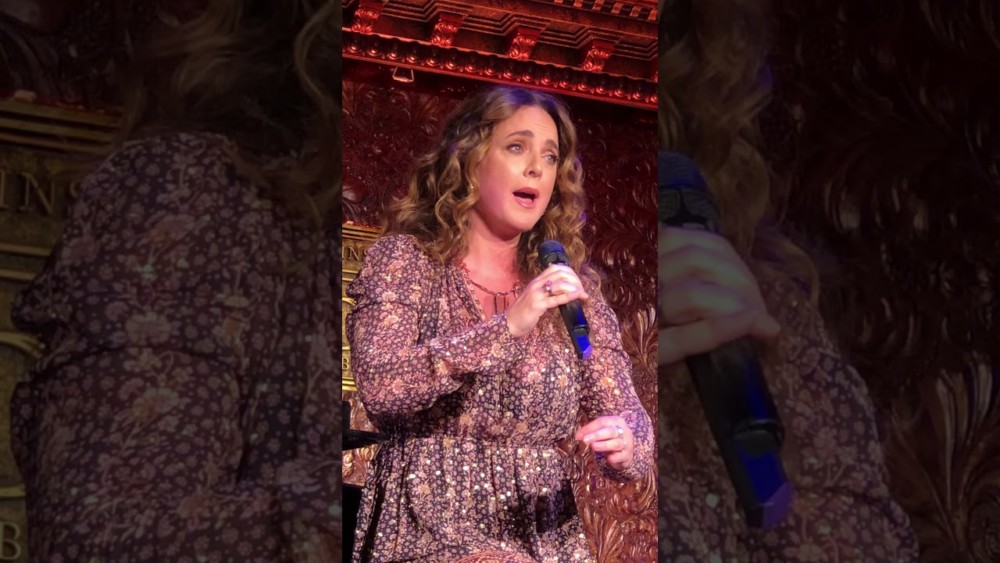 Born in New York, raised in the suburbs, fully blossomed on Broadway, and always in love with Moss Hart’s words…in this show Melissa Errico will sing of those New York dreams and New York gates, of New York frustrations and New York fulfilments. Reaching into her personal songbook box — Sondheim, Comden & Green, Joni Mitchell — and accompanied by her incomparable longtime partner, the poetic jazz pianist Tedd Firth, she will celebrate the city of rushing pasts, of cancelled lunches and hurried loves, of Broadway dreams and beautiful solitudes.

Melissa begins her concert story with an Italian family’s immigrant dreams, colorful tales of Mott Street, hatcheck girls & the Ziegfeld Follies. She continues on into a twelve-year old’s epiphany watching “On Your Toes” — who then finds herself starring in “My Fair Lady” a decade later in that same theater! And, as another hundred people come to mind, Melissa sings songs by the classic songwriters who celebrate our complex and inimitable and back-to-life town. As she always does, Melissa will pay particular attention to women’s experience and women writers, from a swinging “Wished on The Moon” by one of The New Yorker Magazine’s most original intellectuals, Dorothy Parker, to Georgia Stitt’s and Marcy Heisler’s haunting love song of today’s East Village, “The Wanting of You”. From the glory of the uptown downtown rush to the recent years of shutdowns and backwards blessings — from “Another Hundred People” through “Lonely Town” — Melissa will sing the real and secret New York, the New York of private exaltations and public bumping-intos. Songs will include Sondheim’s “The Little Things You Do Together,” Joni Mitchell’s “Chelsea Morning”…and of course, look for Melissa’s own Manhattan essentials, from Rodgers & Hart “Manhattan” itself through “The Way You Look Tonight,” to which she once danced with her mentor in Central Park. Expect a kiss goodnight, too, and a wish for a peaceful and joyful “Autumn in New York.”

Ghostlight Records has announced that Unknown Soldier: Original Cast Recording – one of the final scores from the beloved late Obie Award-winning songwriter Michael Friedman – will be released in digital and streaming formats on Friday, September 24, the date that would have been Friedman’s 46th birthday. Unknown Soldier features music by Michael Friedman; lyrics by Michael Friedman and Daniel Goldstein; and book by Daniel Goldstein. The original stage production was directed by Trip Cullman. The album is produced by Dean Sharenow, and co-produced by Daniel Goldstein, with Hunter Arnold, The Civilians, and Kurt Deutsch serving at executive producers. It features the cast of Playwrights Horizons’ New York Premiere of the musical and orchestrations by Michael Friedman and music supervisor Marco Paguia, and is conducted by music director Julie McBride. To pre-save the album, please visit

Unknown Soldier is a sweeping, elegiac musical about a woman’s journey to unearth the secrets buried in her family’s past. Beginning as Ellen Rabinowitz discovers a mysterious photograph of an anonymous soldier, tucked away in a box of keepsakes while cleaning out her grandmother’s home. Spanning three generations, the show unravels a delicate tangle of family lore, as Ellen chases the extraordinary story that unlocks her history — and charts her future.

Unknown Soldier had its New York premiere at Playwrights Horizons, from February 14 to March 11, 2020, when it was shuttered by the COVID-19 pandemic. The show made its world premiere at the Williamstown Theater Festival, in Williamstown, Massachusetts, in 2015. Both productions were directed by Trip Cullman.

The Unknown Soldier cast album is a part of The Michael Friedman Collection, a long-term project that will eventually comprise the premiere recordings of nine new musicals, in addition to Ghostlight’s previous acclaimed albums of Bloody Bloody Andrew Jackson, The Fortress of Solitude, Love’s Labour’s Lost, and Pretty Filthy. The Michael Friedman Collection is made possible by the generous donors to the Michael Friedman Legacy Fund, The Civilians, and by the artistic contributions of his many collaborators. More information is at www.TheMichaelFriedmanCollection.com

Broadway’s Haley Swindal announced that she will premiere her brand-new show, Back in Business, at Feinstein’s/54 Below for one night only, on September 20.

In Back in Business, the dazzling Ms. Swindal offers the audience a stylish return to live performances after the Haley Swindal’s last venture to Feinstein’s/54 Below moved audiences with her one-woman show Sing Happy, performing to several sold-out audiences and garnering rave reviews. Ms. Swindal most recently commanded the role of Mama Morton in Broadway’s Chicago. Her other credits include Jekyll and Hyde on Broadway and on tour with White Christmas and Jesus Christ Superstar. This past winter Haley’s To New York, With Love, a limited time streamed concert event, received a 30 day extension by popular demand. She has performed in concert at Carnegie Hall alongside the great standards vocalist Steve Tyrell, acclaimed Irish tenor Ronan Tynan, and under the baton of Steven Reineke with the New York Pops Orchestra. Haley won a New York Emmy for her appearance on “Kids On Deck” and recently finished filming the live-action film remake of Anastasia, in which she played Tsarina Romanov opposite Brandon Routh. Off-Broadway credits include Sistas, This One’s for the Girls, and Out of this World. For more, please follow Haley on Instagram at @haleyswindal.

Musical director Scott Cady will be the pianist, leading his trio as Haley’s accompaniment, with multi award-winning cabaret director Barry Kleinbort at the helm.

On Tuesday September 21, Pangea celebrates its 35th anniversary with an all-night celebration starting at 6pm with performances by a Who’s Who of Pangea artists. (Pangea opened originally as Spaghetteria on East 7th Street, then moved to its present location in 1986.) Opened by Penny Arcade, the continuous performances in the Cabaret Room are curated by co-owner and entertainment director Stephen Shanaghan, with the help of Kevin Malony, Ben Cassara, Gerry Geddes, and Coby Koehl. Co-owner Arnoldo Caballero y Cespedes (Pangea’s interior design director) co-hosts the party with Shanaghan.  Starts 6pm, free admission, proof of vaccination required. A new feature at the club — regularly scheduled no-cover entertainment in the Front Lounge – continues with the extension of these crowd favorites: Sue Matsuki’s “Jazz Brunch Open Mic” (2nd Sunday of the month); Michael McAssey’s “Monday Open Mic” series. As it has been since emerging from COVID after being on life-support, Pangea has been enforcing a strict proof of vaccination policy for the Cabaret Room.  Shows with music charges are all cash at the door except for Tammy Faye Starlite and Sidney Myer shows, which are advance sale online.

Jazz at Lincoln Center welcomed in-person audiences back to Dizzy’s Club at Frederick P. Rose Hall in New York City with live performances this summer and will keep the momentum going throughout the fall. Dizzy’s Club is renowned for performances featuring world-class jazz artists, panoramic views of the Manhattan skyline and a warm ambiance.

After more than a year of streaming Dizzy’s Club virtual concerts such as Jazz From Homeand Live From Dizzy’s, in-person audiences are back in the House of Swing, enjoying live music by Club favorites, from established artists to emerging talent, who have graced its stage since the club’s inception. Audiences will continue to be treated to world-class jazz alongside all-new craft cocktails, a curated wine selection and a brand new Southern American-inspired dinner menu.

Dizzy’s Club is located in Frederick P. Rose Hall, home of Jazz at Lincoln Center, on Broadway at 60th Street on the 5th Floor of the Shops at Columbus Circle, New York City.

11 extraordinary women over 40 have been hand-picked to appear in the finals of the 7th annual “Tomatoes Got Talent” contest at The Triad Theatre, 158 West 72nd Street, on Monday October 4 at 7pm. Tomatoes Got Talent is a showcase for women who have made their marks and their livings outside of the entertainment world, but who consider the craft of singing and performing to be integral to their lives.

This year’s blue-ribbon jury consists of Tony nominee Lee Roy Reams, and the Tony Award-winning Broadway producers Margot Astrachan and Ken Waissman. The show’s music director is Paul Chamlin. Making a special guest appearance is the acclaimed singer and Tony-nominated educator Corinna Sowers Adler.  Also performing as a guest will be therapist and gerontologist Merrill Stone, who was a runner up in the first “Tomatoes Got Talent” in 2014.  Last year’s Tomatoes contest was uprooted in April 2020.

Here they are, the finalists: A Senior Ms. America NY runner up, Carol Barnett recently retired after 45 years as a chef.Businesswoman and mom Susie Clausen decided to pick up the saxophone and singing lessons under five years ago.Judith George owns her own video production company and is a stand-up.Reared in the South, Jo Jones is an accomplished acrobatic baton twirler and former pre-school teacher.Shana Kahn is a fashion executive for Ralph Lauren.A student of the piano and ukulele, Lisa Kerr is a risk manager with a major corporation. Robin Lyon-Gardiner is a full-time real estate broker.Jean Marcley is a blind stand-up and self-worth coach. Kara Masciangelo has worked for many years at the Federal Reserve Bank.Deana Monaco is a legal assistant at Morgan Stanley.Leyla Zaloutskaya is a global IT trainer for the United Nations. The reigning champion is 2019 winner Christina Connors.  The 2018 winner was Sheree Sano. For tickets and information visit www.thethreetomatoes.com