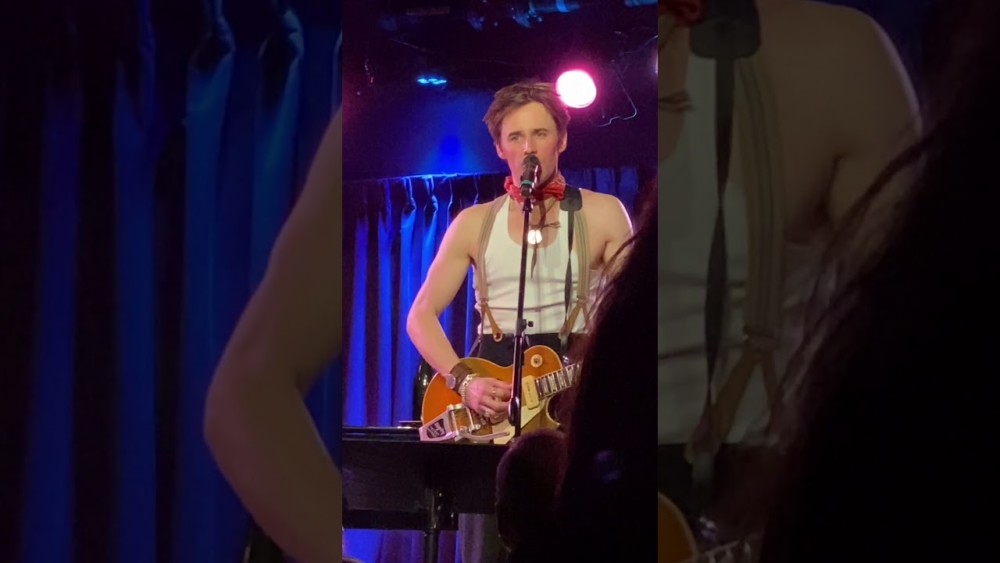 At The Green Room 42, these pop-up shows are just being announced

Loveville High: A Prom In Nine Musical Podcasts, in association with the Broadway Podcast Network, is pleased to announce the re-release of the remastered audio musical, plus songs from the podcast will be available free on streaming services. With book and lyrics by David Zellnik (Drama Desk nominated Yank!) and music by Eric Svejcar (Disney’s Peter Pan Jr. with Zellnik) Loveville High takes place on prom night in the fictional town of Loveville, Ohio. Each ten-minute episode tells a love story – new love, old love, romantic love, friend love, gay and straight, cis and genderqueer; each is a self-contained musical while also connecting with the other episodes to form a glimpse into the biggest night in the lives of one high school class. The first five remastered episodes and a special bonus episode are now available exclusively from the Broadway Podcast Network on the BPN APP, and wherever you listen to your favorite podcasts. The final four remastered episodes will be released weekly on subsequent Wednesdays.  Find the podcast now at BPN.FM/lovevillehigh and the album at https://ditto.fm/loveville-high.

Since recording the podcast in 2019, the stars of Loveville High have gone on to grand successes. Tony award-winning Ali Stroker (Oklahoma!, Deaf West Theatre’s Spring Awakening) stars as Amanda, Tony award-nominated Kathryn Gallagher (Jagged Little Pill) stars as Katrina, West Side Story’s Isaac Powell stars as Cory and has just been cast in the Sex and the City revival, Mason Alexander Park (Hedwig and the Angry Inch, First National Broadway Tour) as Jendrix is working on two Netflix series Cowboy Bebop and The Sandman, Ryann Redmond (Frozen, Escape to Margaritaville, If/Then, Bring It On) as Chass became the first female-identifying actress to play Olaf, Kathryn Allison (Disney’s Aladdin) as Madison is in the upcoming Company, Troy Iwata (Be More Chill) as Kyle was seen in the popular Netflix show Dash & LilyI, Hailey Kilgore (Once on This Island) as Jane is playing Carolyn Franklin in Respect, Jay Armstrong Johnson (Phantom of the Opera, On The Town, Hair) as Zeke raised over $250k for BCEFA with his I Put a Spell on You visual album, Gizel Jiménez (Drama Desk Nominated Outstanding Actress in a Musical for The Public’s Miss You Like Hell) as Wanda is in the popular webseries Neighbors, and Andrew Durand (Ink, Head Over Heals) as Seth was most recently seen in the Tony Award-winning INK.

Andrew Polec, 32, actor/singer/musician/composer from Doylestown, PA, is honored to have been named the first prize winner in The Kurt Weill Foundation for Music ‘s 23rd Annual Lotte Lenya Competition, which took place in New York City on August 28, 2021. He received the $20,000 First Prize plus a $2,000 Finalist Prize, for a total of $22,000. Each of his four selections were a fully realized one-act drama.

There were 15 finalists, ages 26 to 32, culled from a record applicant pool of 500 entrants, hailing from 29 countries and 39 US states. Each finalist performed a continuous fifteen-minute program of four contrasting numbers, including at least one by Kurt Weill. Polec performed these four songs … “She Loves Me” from She Loves Me by Bock/Harnick; “Bilbao Song” from Happy End by Weill/Brecht (Feingold translation), “Confession Aria” from Dead Man Walking  by Jake Heggie and “How Glory Goes” from Floyd Collins by Adam Guettel.

Brady Sansone, Director of Programs and Business Affairs at the Kurt Weill Foundation said, “Andrew achieved one of the highest scores in the history of the competition and is a terrific example of precisely what the Lenya Competition rewards: singing actors/acting singers who can ‘do it all’!” The judges, stage director and Tony-winning actor, Victoria Clark, Broadway and television star, Mary Beth Peil, and Broadway conductor and music director Andy Einhorn described Andrew’s performances as “four perfectly curated one-act dramas.” They were impressed how he “landed each moment in his program” and agreed that “he has the special ability to communicate the center of every character, and possesses the ‘It’ factor in extraordinary measure.”

Polec was elated by his placement in this international competition. He said, “When they announced my name for first place, I was so unbelievably grateful and honored. I was with such a talented group of artists.” While preparing for this virtual performance application which was during the Pandemic, he said, “When the world shut down (due to COVID), I realized this is the last year I could possibly do this. This has been the most worthwhile experience of this whole Pandemic.”

Andrew Polec has never been afraid to take chances. Stretching his performances beyond the expected, he has a magnetic quality that attracts audiences to his every move. A person who once aspired to be an athlete, he brings a physicality to each performance whether singing in a concert, acting in a musical or television show or leading his band. He is currently playing the role of “Berger” in Hair at the Old Globe Theater in San Diego, where he has also been named a Kurt Weill/Lotte Lenya Artist. He’s receiving raves for this performance as he did for his award-winning role as “Strat” in Bat Out of Hell. He won The Joe Allen Best West End Debut award, decided by public vote, for “Bat Out of Hell: The Musical” at the Manchester Opera House and The London Coliseum. He reprised the role on the West End in London and Toronto, before leading the cast at the New York City Center. In 2020 and 2021 he performed virtually and in-concert at the legendary Bucks county Playhouse in PA.

A graduate of the Brown/ Trinity Rep MFA program, Polec appeared Off-Broadway in “The Fantasticks” at the Jerry Orbach Theater and has performed at the Hudson Valley Shakespeare Festival, Providence Fringe Festival, and with the Trinity Repertory Company. His television credits include “Katy Keene” and “Prodigal Son.”

More than a vocal competition, the Lotte Lenya Competition recognizes talented young singer/actors who are dramatically and musically convincing in repertoire ranging from opera/operetta to contemporary Broadway scores, with a focus on the works of Kurt Weill. Since its inception in 1998, the Lotte Lenya Competition has grown into an internationally recognized leader in identifying and nurturing the next generation of “total-package performers” (Opera News) and rising stars in both the opera and musical theater worlds. In awarding more than $1.2 million in prize money since the Competition’s inception, the Kurt Weill Foundation has celebrated the talent and supported the careers of hundreds of singing actors worldwide.

The entire performance and awards ceremony was live streamed globally. An edited version of the finals will be available free and on-demand to audiences worldwide beginning Friday, September 10 via OperaVision.

Honey Bun Records is proud to announce the release of international concert and recording artist Maxine Linehan’s new album,What Would Petula Do? A Tribute to Petula Clark. The album was recorded live at legendary Paris performance venue Théâtre Du Châtelet in front of a sold-out crowd of 2500 transfixed fans, capturing for all of eternity what became a legendary evening of song. What Would Petula Do? will be released on Friday, September 10, 2021.

In her wildly acclaimed solo concert, What Would Petula Do? A Tribute to Petula Clark, Linehan takes her audience on a musical journey exuberantly charting the course of Clark’s extraordinary career from her early, popular recordings in the 1940s, through her mega-stardom in the 1960s, to her award- winning performances in film and on Broadway right up to the 1990s. Backed by a world-class twelve-piece band with stunning orchestrations, this show has consistently moved audiences to tears and gotten them dancing in the aisles. During the incredible evening captured on this recording, the sold-out crowd gave Ms. Linehan three standing ovations, unwilling to let her leave the stage.

In the tradition set forth by Ms. Clark, Ms. Linehan performs the set in both French and English. She continues to tour the stage version of What Would Petula Do? across North America, Europe, and Australia.

An internationally acclaimed concert and recording artist, Linehan is an interpretive artist that uses popular songbooks and theatrical presentations to share intimate truths and build communal bonds. The Irish performer, singer, writer, producer, and actress fuses dialogue, autobiographical story arcs, and specific artist song collections for transformative concert experiences. Although Southern Vermont-based, Linehan performs in world famous venues around the globe, as well as intimate settings. Her repertoire is refreshingly eclectic – to date, she’s interpreted the songbooks of such varied artists as U2, Petula Clark, and Barbra Streisand.

Maxine’s first studio album, Beautiful Songs, was awarded a Top Ten pick by USA Today, and garnered rave reviews in The New York Times, Billboard, The Huffington Post, and others. Her acclaimed debut holiday album This Time If Year, was described by Forbes as “Lush and Mesmerizing’ and by The Irish Voice as “A Sonic Marvel!”