The Bestest Office Christmas Party Ever – a special EP recording of selections from the irreverent new holiday musical – is available on all digital and streaming platforms starting today, Friday, December 2. The piece, which features book and lyrics by Drew Larimore (Smithtown, Out of Iceland) and music and lyrics by Billy Recce (Little Black Book, A Musical About Star Wars) is a hilarious holiday office party gone awry that brings a bawdy, twisted, and alternative look to conventional Christmas shows. To stream or download the music, please visit bestestofficechristmaspartyever.hearnow.com

The Bestest Office Christmas Party Ever follows a sad fivesome of co-workers at a struggling adult diapers factory, all dressed as elves in hopes of receiving a massive Holiday Bonus. When they realize their holiday bonus is nowhere to be found, existential Christmas chaos ensues. A sendup of Office Christmas party culture, the musical is a hilarious examination of isolation and conflicting emotions during the holiday season.

“We love the classics,” says Larimore. “And while we certainly appreciate the traditional holiday fare you see in theaters, movie houses and on TV this time of year, our goal with The Bestest Office Christmas Party Ever is give people more diverse options.” “We wanted to provide something a little more biting than the conventional Christmas carols and holiday cards,” adds Recce. “This has a little edge, a little camp and a whole lot of sass.”

The Bestest Office Christmas Party Ever premiered in a developmental online presentation in December of 2020 through The New York Theatre Barn. 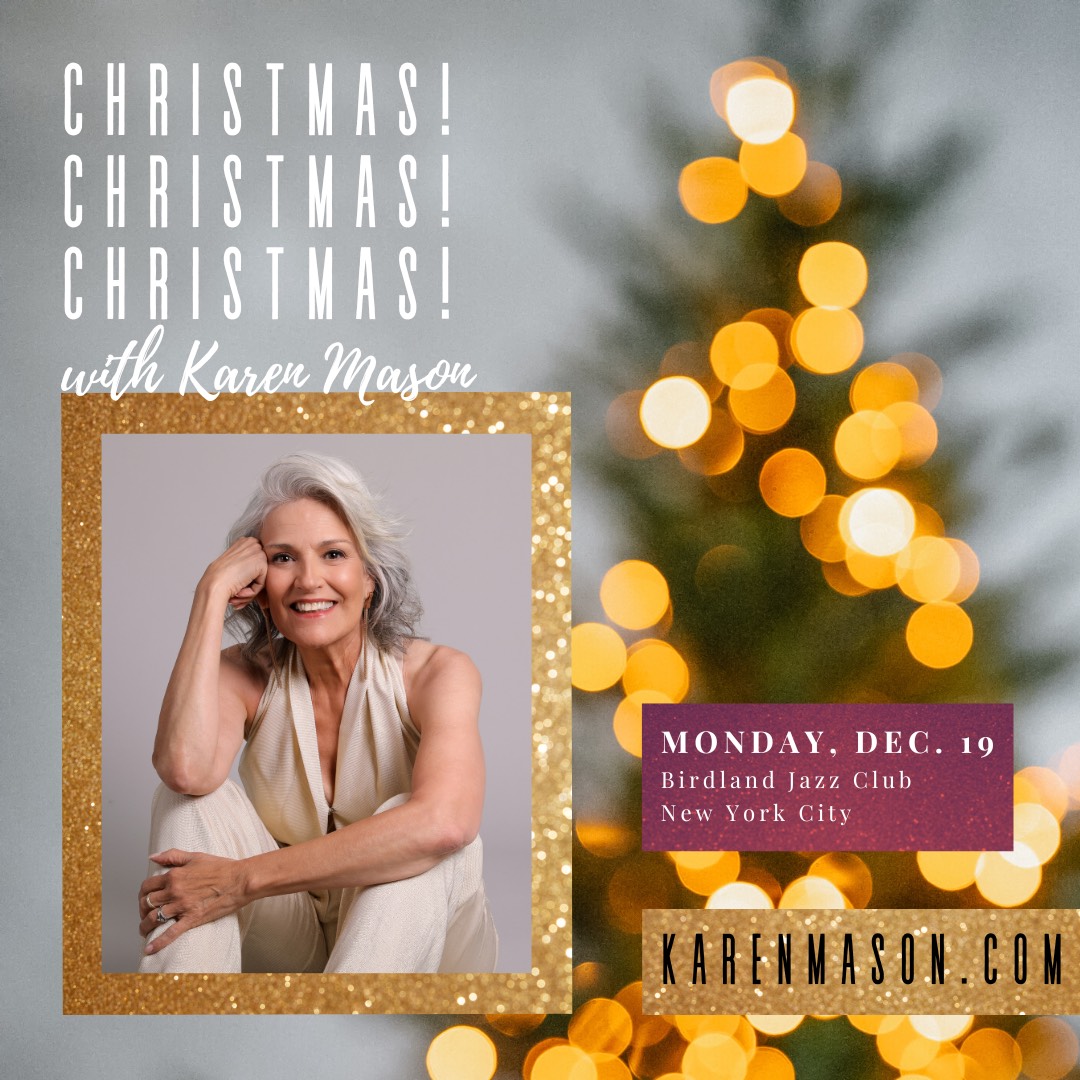 Birdland Jazz Club will present the return of Karen Mason with her concert “Christmas! Christmas! Christmas!” on Monday, December 19 at7:00 PM. Mason’s legendary holiday show features unique interpretations of old and new seasonal classics. Sassy, brassy, and tinged with confessional monologues, this show includes a slinky arrangement of “Santa Claus Is Coming to Town,” a heartfelt “I’ll Be Home for Christmas,” and many more.  The evening is directed by Barry Kleinbort; with musical direction by Christopher Denny on piano, and Tom Hubbard on bass. There is a $40 music charge. Birdland is located at 315 West 44th Street in New York.

Karen Mason was recently seen playing Mrs. Marsh on Ryan Murphy’s “Halston” on Netflix. On tour, was last seen as Madame Giry in the North American premiere of Love Never Dies (Andrew Lloyd Webber’s epic sequel to The Phantom of the Opera). On Broadway, she starred as The Queen of Hearts in Wonderlandand originated the role of Tanya in Mamma Mia! (2002 Drama Desk nomination as Best Actress). Her other leading roles include Norma Desmond in Sunset Boulevard on Broadway and in Los Angeles for three years; Velma von Tussel in the Broadway company of Hairspray; “Monotony” singer and Mazeppa in Jerome Robbins’ Broadway. In regional theater, Karen starred in Chasing Rainbows (Paper Mill Playhouse), A Christmas Story as Miss Shields; White Christmas (St. Louis Muni Opera); Side by Side by Sondheim (Coconut Grove Playhouse in Florida); Gypsy (Sundance Theatre in California); Company (Huntington Theatre in Boston). Off-Broadway, she won the Outer Critics Circle Award for her performance in And The World Goes ‘Round.

She is a 14-time MAC Award winner, and was the recipient of the 2019 MAC Lifetime Achievement Award. She also won 3 Bistro Awards. Her eight recordings include the single “It’s About Time,” written by Paul Rolnick and Shelly Markham; her 2009 MAC Award-winning Right Here/ Right Now, The Sweetest of Nights, When the Sun Comes Out, Christmas! Christmas! Christmas!, Better Days (featuring the 1998 Emmy Award-winning song “Hold Me”); and Not So Simply Broadway. Also, Wonderland (original cast); the film Jeffrey (Varese Sarabande); Wonderful Town (JAY Records); the cast album of And The World Goes ‘Round(RCA Victor). www.karenmason.com 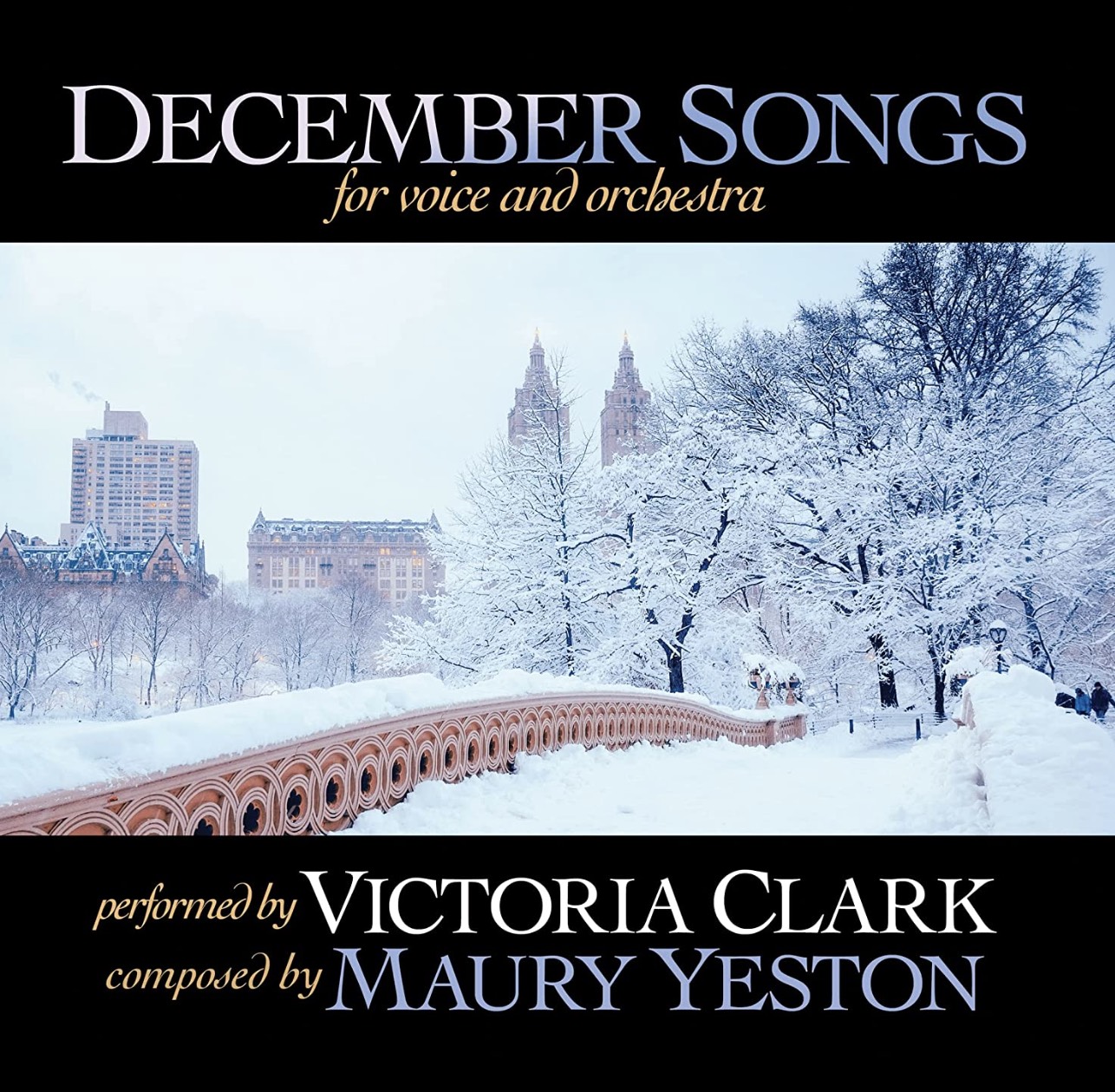 PS CLASSICS, the label dedicated to the heritage of Broadway and American popular song, has released the second solo album by Victoria Clark, the Tony Award-winning actress who opened recently on Broadway in the acclaimed new musical Kimberly Akimbo. December Songs for Voice and Orchestra – a sumptuous reinvention of Maury Yeston’s beloved song cycle, reimagined here by Clark and a 37-piece orchestra conducted by Ted Sperling and scored by Larry Hochman – is available on CD today, Friday, November 25. The album was released in digital and streaming formats earlier this month. The booklet features complete lyrics, in addition to liner notes by esteemed arts writer Matthew Gurewitsch. The album, produced by Bart Migal, Ted Sperling, and Maury Yeston, is available on Amazon.com and Apple Music.

You may think you know Maury Yeston’s December Songs — his poignant, richly detailed journey patterned after Schubert’s Winterreise — but you don’t. Commissioned in 1991 by Carnegie Hall in honor of its centennial celebration, Yeston responded with a seminal work for voice and piano that reflected and honored the variety of musical worlds that had long graced the Carnegie Hall stage: from classical to cabaret, from folk to pop. Since then, December Songs has received numerous performances and been translated into a dozen languages, but it has long been Yeston’s dream for these songs to gain the dimensions and power that only a full orchestra can provide.

In 2022, that dream became a reality when orchestrator Larry Hochman was commissioned to score the piece for 37 instruments, and actress and singer Victoria Clark — who had taken Broadway by storm as Alice Beane in Yeston’s Tony Award-winning Titanic and who had herself been honored with a Tony Award for Leading Actress in a Musical for The Light in the Piazza — signed on to portray the wounded woman who wanders a wintery Central Park, immersed in but ultimately triumphing over her travails.. Clark put herself through a four-month rehearsal period, determined to make the role her own, and to ensure that her journey was every bit as detailed and persuasive as if she were performing it on the stage. Upon its recording in May 2022, the results proved cathartic, as songs written to be intimate were raised to the theatrical rhetoric of virtual symphonic dimensions, yet miraculously retained all their subtleties and delicacies.

Now PS Classics, which has had the honor of collaborating with the composer on nearly a dozen of his works – including Grammy-nominated cast albums of Nine and Death Takes a Holiday and acclaimed releases of The Maury Yeston Songbook and Maury Sings Yeston – is thrilled to unveil December Songs for Voice and Orchestra, a bold reimagining of a pioneering work that triumphantly broadens its musical and emotional range. The label is also the home of Clark’s debut solo album, Fifteen Seconds of Grace.