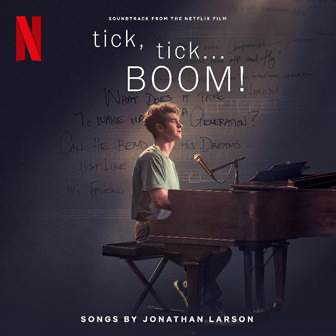 Rounding out the 17-track collection are 4 bonus numbers, including a special end credits reprise of “Come To Your Senses” featuring multi-Grammy®-nominated powerhouse singer/songwriter Jazmine Sullivan and a cover version of the previously unreleased Jonathan Larson song, “Only Takes a Few” performed by acclaimed folk band The Mountain Goats.

The soundtrack was produced by Grammy®, Tony® and Emmy® winners Alex Lacamoire and Bill Sherman along with Kurt Crowley, mixed by Grammy® winner Greg Wells and music supervised by Grammy® winner and Emmy® nominee Steven Gizicki. In addition to today’s digital release, the album is set to be released in physical formats, with CD arriving Friday, December 3 and vinyl arriving in 2022 – PREORDER HERE.

tick, tick…BOOM! which marks the feature directorial debut of Lin-Manuel Miranda, arrives in select theaters on Friday, November 12 and releases globally on Netflix on  Friday, November 19. Check out the film’s trailer HERE.

Moments ago on Instagram, beloved stage stars Sierra Boggess and Julian Ovenden announced that their upcoming album Together At A Distance, featuring classic and contemporary Broadway duets, will be released on Friday, November 19 on all streaming and digital platforms.

Boggess and Ovenden have performed together in concerts on both sides of the Atlantic including BBC’s Proms at Royal Albert Hall with the John Wilson Orchestra in both 2010 and 2012, and at Carnegie Hall with the New York Pops in 2015.

Watch the new music video of them performing “How Could I Ever Know” from The Secret Garden HERE. Select videos from the album were released in 2020 and can be viewed on Sierra Boggess’ YouTube page HERE.

Karen Mason – the acclaimed Broadway star and concert artist – has announced that her new album Let the Music Play, is available in all digital formats and on CD from Zevely Records. The recording’s powerful and timely first single, the title cut “Let the Music Play,” was released earlier this fall. On the heels of her featured role opposite Ewan McGregor on the hit Netflix miniseries “Halston,” Mason presents this collection of theater music, pop classics and new compositions. Special guests Stephen Schwartz, who plays piano on a tender version of the beloved Wicked ballad “For Good,” and David Friedman, who accompanies Karen on his poignant standard “We Can Be Kind.” The album – which features arrangements by Christopher Denny and Barry Kleinbort, in addition to contributions from Dick Gallagher, and Brian Lasser – is produced by Paul Rolnick. Listen to the new album at Spotify or Apple Music.

Following her sold-out album release concert at New York’s Feinstein’s/54 Below this month, she will return to the city for a very special three-night edition of her legendary Christmas show at The Laurie Beechman Theater from December 17-19. She will also celebrate the album and the holidays at New Hope, PA’s RRazz Room on December 11. Concert info and album details are at KarenMason.com.

FatLab Music (Michael Shaieb & Brent Lord) are happy to announce the upcoming release of “The Most Wonderful Time of the Year,” a very special collection of seasonal favorites – some things old and some things new – by Broadway singing actress Lisa Howard (It Shoulda Been You, Escape to Margaritaville), just in time for the holidays! The album will be officially released on all digital music platforms on Saturday, November 20, but will be available for pre-order on iTunes beginning tomorrow, Saturday, November 13. Pre-orders will include instant access to the ever popular “Sleigh Ride,” featuring guest vocalist Derrick Baskin, original cast member and Tony award-nominee for Ain’t Too Proud. For more information visit www.fatlab.com.

Longtime collaborators Lisa Howard and Michael Shaieb had often dreamed of producing their own Christmas album. During the pandemic, with more time on their hands than usual, they decided to take advantage and fulfill their Dream! Inspired by her love of Christmas movies, Lisa chose the songs for the album by envisioning that they were the score to any one of her many favorite holiday classics. What arose was an eclectic mix of classic Christmas favorites and modern pop hits. Michael Shaieb arranged and orchestrated the songs with a fresh new take, and the result is a beautifully crafted holiday album that you’ll want to listen to over and over.

In celebration of this recording, Ms. Howard will appear at Feinstein’s/54Below (254 West 54th Street – between Broadway & 8th Avenue) performing with Mr. Shaieb and his trio in “What Christmas Means To Me” on Sunday, December 12th at 7pm. Tickets are available at www.54Below.com and (646) 476-3551.

“‘O Holy Night’ has always stirred in me,” Block explains. “I have had the privilege to perform this hymn in many venues, from my hometown church to Carnegie Hall with the New York Pops, and everywhere in between. But this intimate arrangement allowed me to feel the song more than I ever had. And when a song allows you to feel the words, the story, the instrumentation, it becomes more of a prayer than a song.”