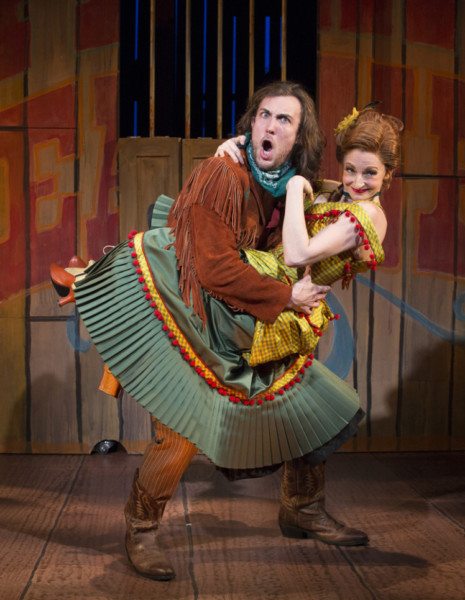 If you find yourself in the vicinity of New World Stages, you’d better run inside for cover. Because the cast of the Wild West tuner, Desperate Measures, is gunning for your funny bone, and they are aimin’ to hit a bull’s eye. 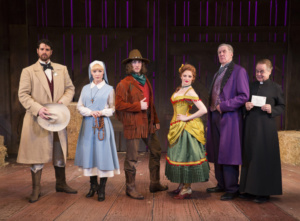 The cast of Desperate Measures

I just saw Desperate Measures for the third time. The first time I saw it was at the New York Musical Festival. I was convinced they’d be on Broadway within a year. Flash forward eleven years. That’s how long it can take a new musical even this good to get out there. Thank Artistic Director James Morgan of the York Theater for giving this revised version of the show a chance to be seen again here in New York.   Commercial producer Pat Addis got involved, and after three extensions at the York the show moved to an open run at the New World Stages. Now this company of brilliant fools is already in negotiations to take their hootin’ and hollerin’ to such far flung places as Australia and Malaysia. So if you want to see them while you can still get there on your Metro pass, you better giddy up! 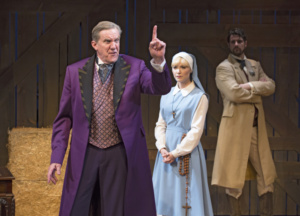 Shakespeare wrote 37 plays, and three of them are known as the problem plays. The term comes from a label for certain 19thcentury dramas which focused on hard-to-resolve social issues. Desperate Measures is a Western themed musical adaptation of Shakespeare’s best problem play, Measure for Measure. The plot and characters may be very loosely adapted from its source. But the central question of whether absolute morality can exist separately from our human needs remains the same. And it’s much funnier here. 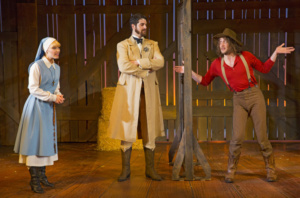 In Desperate Measures, a handsome but not too bright young man, Johnny Blood, defends Belle, a local saloon girl he loves, and kills her attacker. He gets arrested by the straight arrow Sheriff Green, and is sentenced to death by the hard-nosed Germanic Governor Richterhenkenpflichtgetruber.

At the urging of the Sheriff, Johnny’s sister, Susanna, a novice nun soon to become a full fledged nun, goes to plead with the Governor for the life of her brother. It turns out that the Governor is an all powerful, amoral and self-serving old man with a penchant for pretty young women, who believes anything he wants for himself is justified by any means. If a certain somebody ever gives up politics, this role could restart his career in show business.

So the Governor offers Susanna a deal, same as in Shakespeare’s play. He’ll let Johnny live, but only if Susanna will yield up her chastity to him. Susanna’s choice between duty to the church and duty to family becomes even more complicated for her when she finds herself  inconveniently attracted to Sheriff Green.  To save Susanna’s chastity for the right guy, the Sheriff hatches a plot to substitute Belle for Susanna in the dark, hoping the Governor won’t notice.

But Susanna isn’t the only one with a moral quandary. Johnny doesn’t mind leaning on Susanna to give up the sacred goods to save his life, even if it means breaking her vows. But he has a harder time accepting that his girlfriend, Belle, might do something like that with another guy, even though that is what she actually does for a living. In other words, it’s not just a play with one problem. The Sheriff wants to save Susanna’s calling, but he finds her beauty calling to him as well. So it’s a play about people with a lot of problems with no easy answers. Believe it or not, musical comedy ensues. What isn’t so funny to all of them is very funny to us. As the saying goes: Tragedy is when I fall down. Comedy is when you fall down.

Composer David Friedman has set Peter Kellogg’s clever lyrics beautifully, in a score with both country and comedic flair.  The best song in the show, a duet called “Not For You” between Belle and Johnny, is as much of a classic battle of the sexes as “Anything You Can Do, I Can Do Better” from Annie Get Your Gun.

Between the NYMF presentation and now, Kellogg he made the decision to turn his script into iambic pentameter, like the Shakespeare plays.  But the dialogue is peppered with smart and funny rhymed couplets which sound even more like poet Richard Wilbur’s brilliant translations of the Moliere comedies than the Bard of Avon. Add to that a comic style which evokes the Italian street comedies of the Commedia dell’Arte. The result, under the whipcracking command of director-choreographer Bill Catellino, is a rootin’, tootin’ blend of modern and classic comic sensibilities.

This kind of comedy requires a delicate balance of sincerity and stylization, which this sharp shooting cast hits smack dab in the acting bulls eye. Connor Ryan’s Johnny Blood blunts his natural good looks with a goofy obtuseness.  As the virginal Susanna, Sarah Parnicky brings just the right balance of resistance and ripeness. She is perfectly matched by tall, hunky Peter Saide as the Sheriff. Saide has played the exuberant braggart Gaston in Beauty and the Beast  all over the place. But he chooses to bring a brilliantly understated restraint to the Sheriff, which makes us laugh even harder than if he had made the broader and more obvious choice. Veteran Nick Wyman as the Governor is the only cast member who has been with the show from the beginning, and is gleefully ickier than ever. Rubber faced Lauren Molina manages to pay tribute to the most outrageously funny choices of her idols Carol Burnett, Gilda Radner, and Lucille Ball. The cast is rounded out by Gary Marachek, whose Barry Fitzgerald-esque drunken priest is struggling with an existential crisis which can only be assuaged by a letter which may or may not be from Friedrich Nietzche himself.

James Morgan continues his association with the show as its set designer, creating a single barn-like environment with wonderfully funny signs to distinguish locations. Costumes by Nicole Wee also lend color and character nicely. The foot stompin’ musical direction and orchestrations are provided by a crackerjack band under the gun of David Hancock Turner.

So stop your dilly-dallying, and mosey on over to the New World Stages right now.

Suzanna BowlingJune 22, 2022
Read More
Scroll for more
Tap
Ballroom Comes to Feinstein’s/54 Below With A Starry Cast
Musical Frankenstein is a Monstrous Mess