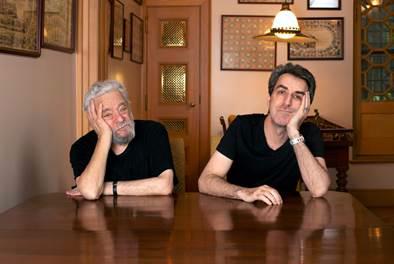 It was announced today that SubCulture and Jason Robert Brown will commemorate the 50th performance in their Artist-in-Residence series by presenting a momentous evening of songs and stories with Jason Robert Brown and Stephen Sondheim at Town Hall on Monday, June 24 at 8 pm. Tony Award-winner Katrina Lenk joins these theatrical legends for an unforgettable evening of their songs performed in brand new arrangements with an orchestra of New York’s finest musicians.

“Every month at SubCulture, my band and I have collaborated with the best singers and songwriters from Broadway and beyond,” said Jason Robert Brown. “I knew that for our 50th show in the series, we owed it to our loyal audience to reach for the absolute summit. In my world, that summit is Stephen Sondheim, the man who, more than anyone else on Earth, has influenced my music and lyrics, as well as my very understanding of what a writer is. I am awestruck that Steve accepted my invitation. I can’t say it’s a dream come true because I would have never dared to dream of anything as incredible as this.”

All proceeds from the evening will be donated to Brady (www.bradyunited.org), an important cause for Brown, Sondheim, and Marc Kaplan, co-Founder of SubCulture. “Bringing an end to gun violence is imperative, and I am humbled to again be able to support Brady’s commitment to addressing this epidemic through education, litigation, and legislation,” said Kaplan. In 2016, SubCulture and Jason Robert Brown presented a sold-out fundraiser for Brady – a truly memorable concert of The Last Five Years starring Cynthia Erivo and Joshua Henry.

SubCulture is one of New York’s premiere venue experiences for artists, entrepreneurs, innovators, and their enthusiasts, in one of New York’s most evocative spaces. Designed as an intimate theater and gathering place in one room, SubCulture incorporates exceptional sound and lighting technology into a space with naturally strong acoustics and unique architectural features. The venue has been featured in The New York Times, The New Yorker, The Wall Street Journal, and New York Magazine for its exquisite sound, comfortable aesthetic, and unparalleled hospitality.

Jason Robert Brown is the ultimate multi-hyphenate – composer, lyricist, conductor, arranger, orchestrator, director and performer – best known for his dazzling scores to several of the most renowned musicals of his generation, including The Bridges of Madison County, for which Jason received the 2014 Tony Awards for Best Score and Best Orchestrations; the seminal chamber musical The Last Five Years; his debut song cycle Songs for a New World; and Parade, winner of the 1999 Best Score Tony. His other musicals include Honeymoon In Vegas and 13, a film version of which is currently in development. The New York Times refers to Jason as “a leading member of a new generation of composers who embody high hopes for the American musical.” As a pianist and singer, Jason performs in theaters around the world as a soloist and with his band. His newest album, How We React and How We Recover, was released last year on Ghostlight Records, joining his award-winning 2005 collection Wearing Someone Else’s Clothes, and his 2012 live concert album and PBS special with singer Anika Noni Rose. Last year, Jason’s sold-out concert at the London Palladiumwas broadcast internationally on BBC Radio 2. Jason lives with his wife, composer Georgia Stitt, and their daughters in New York City. Jason is a proud member of the Dramatists Guild and the American Federation of Musicians Local 802. Visit him on the web at www.jasonrobertbrown.com.

Katrina Lenk lauded as the actress who will “Quietly break your heart…who combines classic beauty worthy of a 1930s film star with easygoing friendliness” (Elisabeth Vincintelli, NY Times) and a “new kind of Broadway leading lady” (Casey Mink, Backstage), Katrina Lenk starred as Dina in the hit Broadway musical The Band’s Visit, for which she earned numerous accolades including the Tony Award for Best Leading Actress in a Musical, the Grammy Award for Best Musical Theater Album, and the Emmy Award for Outstanding Musical Performance. Ms. Lenk’s other Broadway credits include Pulitzer Prize winner Paula Vogel’s Indecent (Outer Critics Circle Nomination), Spider-Man: Turn Off The Dark, and Once. She has been featured on television in “The Village,” “The Marvelous Mrs. Maisel,” “The Good Fight,” “The Get Down,” “Elementary,” “The Blacklist,” “According to Jim,” and “Will and Grace.” She also co-created and appeared as a series regular on the web series “Miss Teri.” On the big screen, she has appeared in Look Away, Evol: The Theory of Love, Elan Vital, Crime Fiction, Kiss Me in the Dark, and Space Daze.  She has appeared in short films such as The Vigilante, Fractured, Arthur and the Bunnies, and Preservation. In her free time, can be seen in her one-woman band/performance art piece Moxy Phinx.

Brady has one powerful mission — to unite all Americans against gun violence. We work across Congress, the courts, and our communities with over 90 grassroots chapters, bringing together young and old, red and blue, and every shade of color to find common ground in the common sense. In the spirit of our founders Jim and Sarah Brady, we have fought for over 25 years to take action, not sides, and we will not stop until this epidemic ends. It’s in our hands.

Suzanna BowlingFebruary 4, 2023
Read More
Scroll for more
Tap
Gary U.S. Bonds Is Still New York a Happening
Heidi Schreck and What the Constitution Means to Me﻿ Wins The Coveted Prize at The Obie Awards