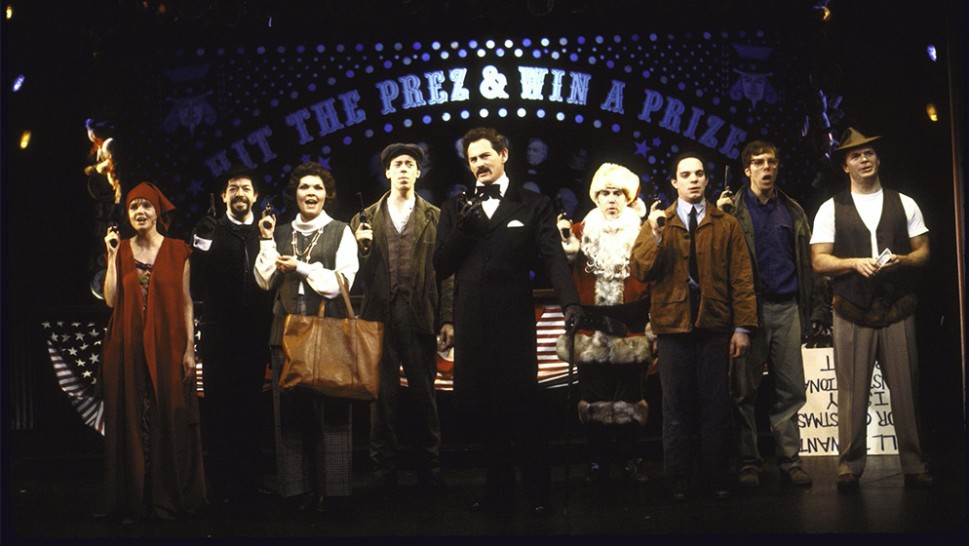 Since COVID the only song that has been in my head has been “Everybody Says Don’t ” from Anyone Can Whistle. The other night I saw a concert version of the musical Parade and I knew I needed to do a series of shows that were just too ahead of their time. These shows told a truth or truths that the world was not ready to accept. Our first of the series was  Anyone Can Whistle, then Leap of Faith.

Assassins had music and lyrics by Stephen Sondheim and a book by John Weidman, based on an original concept by Charles Gilbert Jr.

Assassins opens in a fairground shooting gallery where, Leon Czolgosz, John Hinckley, Charles Guiteau, Giuseppe Zangara, Samuel Byck, Lynette “Squeaky” Fromme, and Sara Jane Moore are given their guns one by one. John Wilkes Booth enters last as a shot rings out.

Booth, with a broken leg, is attempting to write his reasons for killing Lincoln in his diary, but cannot hold the pen. He blames Lincoln for the Civil War and for destroying the South. Booth throws the Balladeer his diary so that he can tell his story to the world. The Balladeer reads out Booth’s justifications, and Booth laments that the act for which he has given up his life will not be enough to heal the country.

Guiteau toasts to the Presidency of the United States, speaking of his ambition to become Ambassador to France. Hinckley accidentally breaks a bottle, and Czolgosz flies into a rage, describing the horrors he sees in the bottle factory he works in and how many men die or are injured just to make a bottle like the one Hinckley has just broken. Guiteau jokingly tells Czolgosz to find another job, and the two begin to argue about the American Dream, with Guiteau defending America and Czolgosz dismissing the “land of opportunity” as a lie. Czolgosz becomes enraged and grabs a bottle, barely stopping himself from throwing it across the room. Booth urges Czolgosz to take control of his fate by shooting Franklin D. Roosevelt.

Zangara’s failed attempt to assassinate Roosevelt. He missed Roosevelt and accidentally killed Chicago Mayor Anton Cermak instead. From an electric chair, Zangara sings his refusal to be afraid and that he hadn’t cared whom he killed as long as it was one of the men who control the money.

Emma Goldman gives a lecture as Leon Czolgosz listens, enraptured. He introduces himself to her and declares his love, but she tells him to redirect his passion to the fight for social justice. Goldman states, “They make us servants, Leon.

Czolgosz reflects on how many men die in the mines, the steel mills and the factories just to make a gun. Czolgosz decides his gun will claim one more victim: the President.

Samuel Byck sits on a park bench in a dirty Santa suit with a picket sign and a shopping bag. He talks into a tape recorder, preparing a message to Leonard Bernstein telling Bernstein he can save the world by writing more love songs, and explaining that he is going to change things by crashing a 747 into the White House and killing Richard Nixon. Then he accuses Bernstein of ignoring him. Complaining about contemporary American life, how the American public is constantly lied to, and announcing that killing him is the only solution.

The Balladeer tells the assassins that their actions didn’t solve their problems or the country’s and that if they want their prizes they must follow the American Dream. The assassins realize that they will never get their prizes, that no one will ever care if they live or die, and briefly sink into absolute desperation. The Assassins all surround the Balladeer, transforming him into Lee Harvey Oswald.

The musical opened Off-Broadway in 1990 to many mixed and negative reviews and ran for 73 performances; in 2004, the show was produced on Broadway to highly favorable notices and won five Tony Awards, including Best Revival of a Musical.