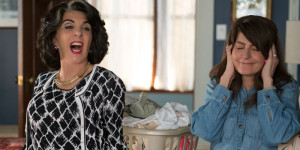 14-years-later “My Big Fat Greek Wedding 2” is back on the big screen. Its predecessor was one of the biggest sleeper hits of all time. This family reunion (the entire cast returns) is charming, funny, relaxing and entertaining. Is it great filming…no, but it takes us back to a simpler place and right now that is just what the doctor ordered. 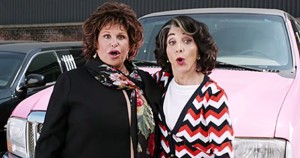 Critics didn’t love Vardalos’ first feature but the word-of-mouth and award nominations (Oscar nom for Vardalos’ original screenplay and a SAG ensemble nom for the cast), made it a film of the people. 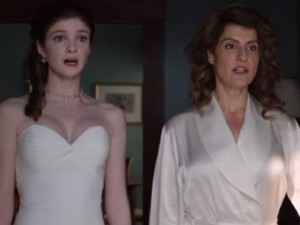 Family remains the driving force as Toula (Vardalos) and her husband Ian (John Corbett) deal with 17-year-old daughter, Paris’s (Elena Kampouris), embarrassment over this obnoxiously loving close family just as her mother did. Toula’s proud Greek immigrant father, Gus (Michael Constantine), coughs under his breath “payback.” Paris hoping to go to college in New York makes Toula has to learn to let go so she can rekindle the romance with Ian. One of the best scenes is in the car as they try to be passionate. 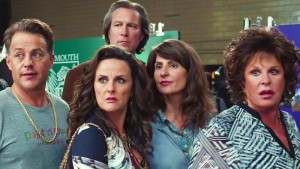 In the meantime, Toula must also deal with the crises of her parent’s marriage license not being valid. Maria (Lainie Kazan), upon learning of this decides she wants to re-evaluate her options.

Highlights are when Paris asks the boy (Alex Wolff) she’s crushing on to go the the prom and finds out he’s greek. New member arrives for the wedding and that is Gus’ long-lost brother (a Mark Margolis).

Gus still toting around his beloved Windex and claiming every word, invention and person has Greek roots and is obsessed with proving he’s a direct descendant of Alexander the Great. His learning ancestry.com will delight anyone who has taught an older person how to use a computer. Andrea Martin steals every scene as feisty Aunt Voula. Gia Carides and Joey Fatone as Toula’s cousins are back with Joey revealing a secret about his personal life; Bess Meisler as the elderly family matriarch is higly amusing when she gets made over. Rita Wilson (who serves as producer, along with Tom Hanks) and John Stamos enter playing husband and wife but get lost in the mix.

Kirk Jones has taken over the direction reins from Joel Zwick and the feel is more pedestrian.