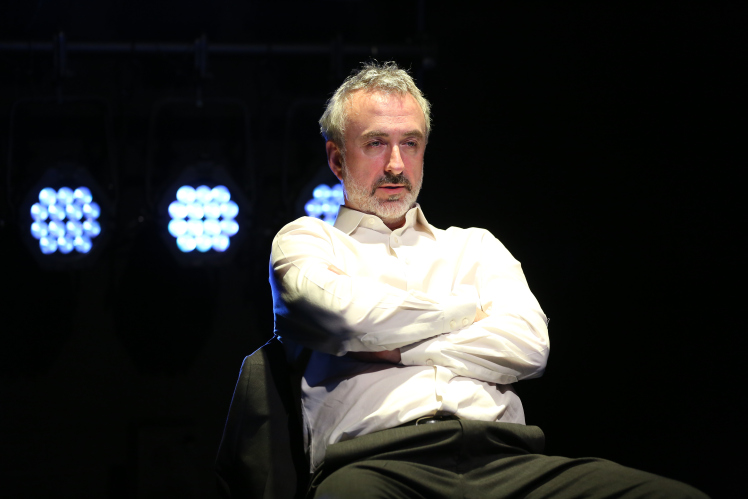 My Eyes Went Dark: From Grief and Unleashed Revenge

My Eyes Went Dark: From Grief and Unleashed Revenge 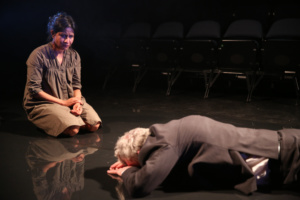 It’s a stark black set, a runway of sorts, with audience members on both sides of the slim acting space. Two chairs, and a number of lights are all that graces the stage. This beautifully told tale of utter grief and sadness is slowly parsed out to us over the 90 minutes we spend with these two souls that inhabit this perfectly crafted small space. Declan Conlon and Thuritha Jayasundera, the two very fine actors that have gifted us with their presence and talent, make it feel huge though. They take this story that is based on a father’s intense unsparing reaction to a family tragedy, and make the 75 minutes feel immense and heavy with anger and loss. Although writer and director, Matthew Wilkinson’s deep and layered drama has moments of disconnect, the play and the performances overcome those unfocused scenes as a whole, leading us down the runway into an abyss of pain and anguish. 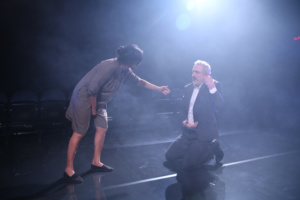 The way this piece is crafted it would be criminal to divulge the drama that sets this tale of loss, anger, and revenge in motion, but it is riveting. Sound design from Max Pappenheim heightens the intensity of the tragedy, while the set and costumes by Bethany Wells, and the lighting by Elliot Griggs keeps it dead center and unwavering. Conlon (The Abbey Theatre’s The House), as the husband and father Nikolai Koslov, the center of this tragedy, is majestic in his stance, posture, and delivery. He is frightening in his stone cold anger, poised with an aggressive and intelligent stance, while also showing the fragility and tremors of discontent underneath his thick skin. It’s a compelling portrayal that is etched in detail and layered with a complex understanding of grief and revenge. Playing multiple other roles sparring with Koslov is the phenomenal Jayasundera (National Theatre’s The Caucasian Chalk Circle) morphing herself on the turn of a dime from a psychiatrist, to a grieving mother, to a child (to name a few), all effortlessly and instantaneously. It’s thrilling to watch, and awe-inspiring to witness how the shifts in her tone, accent, and body language signal so much. She has definitely been given the showier of parts, and rises to the occasion. She is also given the most epic and startling moment playing one innocent character who observes Koslov while talking on the phone with her mother. It’s a breath-taking scene that hits us hard and is only heightened when that character returns later. I’ll say no more, but these two are electric in their thoughtful and intense performances. 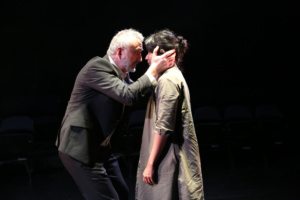 Brought to New York by 107Group, in association with Traverse Theatre and Cusack Projects LTD to participate in the #BritsOffBroadway series, the 59E59 Theatres has scored another epic theatrical piece on the same high level of Torben Betts’s dark comedy, Invincible, Gary Owen’s surprisingly moving, Iphigenia In Splott, and Jon Brittain’s deeply effecting play, Rotterdam. Makes me sad that I missed some of the other offerings that jumped over the pond to grace us and our theatrical scene,. I will hold my breath now, and wait impatiently for next year’s Brits Off Broadway. It’s turning into a spectacular annual event, chock full of a thrilling assortment of fantastic theater. My eyes will only be lightened by the stellar line-up at this series.

Suzanna BowlingApril 16, 2021
Read More
Scroll for more
Tap
What To Look For This Summer On Broadway and Off
Meet the Playwrights of Summerfest: Carrie Robbins Broadway Costume Designer Discovers Playwriting Talent