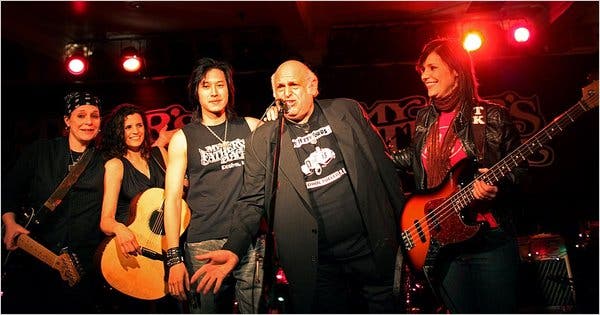 Lights, camera, action … cue the band. We haven’t heard those words for a full year, but legendary club-owner, producer Michael ‘Eppy’ Epstein, is using his My Father’s Place club in Roslyn, Long Island, for a series of Pay-Per-View events as well as a location for video shoots.

“We’ve established a production facility that can accommodate up to 5 cameras; the venue already has an extensive lighting rig and the sound is acoustically balanced to accommodate hard rock; jazz; solo-guitar; and, classical. Every act we’ve had, be in Micky Dolenz or David Johansen, has complimented us on the sound. It’s exceptionally good.”

Epstein has been the visionary guiding light of the rock-oriented club My Father’s Place for decades. In their original location, also in Roslyn, they were the first to present on the East Coast, the likes of Hall & Oates; Bruce Springsteen; The Police; Patti Smith; Joan Jett; Chick Corea; Larry Coryell; The Good Rats; Jim Dawson; Aerosmith; Dave Mason and many others.

“The 70’s were an inspiring time,” says Epstein, “The business itself was moving at a fast pace and we were the key club on the East Coast. Our crowds were discerning and demanded the best out there.”

“I also think the people in the industry at the time were creative, motivated and cared about what they were putting out there in the marketplace. There’re still are people like that and those are the people I want to attract right now for doing an event or video at the club.

“The Pay-Per-View event has kind of fallen by the wayside, but I want to bring it back. Right now, this pandemic shows no signs of slowing down, so the opportunity to afford fans and viewers a first-rate production experience, I believe is the thing to do.”

Epstein has already done several streamed live events form the clubs with terrific results. “We’ve increased viewership with each production and now I want to get some of the label acts.”

My Father’s Place, now based at The Roslyn Hotel, offers perfect accommodations for a two- or three-day shoot

“So much is shut down, so the need for new content is greater than ever and we have the ability to deliver,” he adds.