My View: A Great Night at Feinstein’s/54 Below – Paulo Szot And What An After Party- Countess Luanne de Lesseps

My View: A Great Night at Feinstein’s/54 Below – Paulo Szot And What An After Party- Countess Luanne de Lesseps

Attention Opera, Concert, Broadway, and most of all, Cabaret Lovers…..Paulo Szot is Saluting Broadway in his night club act at Feinstein’s/54 Below and I wish you could have heard what we heard last night.  Watching and listening to Paulo Szot is one of the most thrilling musical experiences one can have.  His voice is inspirational and his physicality is powerfully compelling.  To accompany this international super star, one of the finest creative musical directors was at the Steinway…  Billy Stritch!   Mr. Stritch’s arrangements always produce the most inventive and musically appropriate notes for the various types of songs and singers he works with.  There are many great pianists, but Billy’s harmonies and concepts are unique, and he was at his creative apex with Paulo.

The world of Cabaret has been fortunate that Paulo Szot has used his incredible talents to produce a  night club act.  The only problem is that after you hear him sing your favorite Broadway show tunes his voice may be the only one your music memory will be able to recall singing them.

As Billy Stritch remarked to me after the show. “ Playing for Paulo stimulates my ability to find greater notes to play.”  Paulo Szot at Feinstein’s/54 Below will surely stimulate you.

Surprise for the audience at the 2nd show at Feinstein’s/54 Below.  Paulo graciously stuck around and sang a song in the widely popular Luann De Lesseps extravaganza which is also musically directed by Billy Stritch.

There were lines of folks leaving the Paulo Szot show at Feinstein’s/54 Below as lines of folks were coming in to see the Luann de Lesseps show.  Known as The Countess on Bravo TV’s hit series “Real Housewives of New York City” her nightclub act with always different friends has become a must see at Broadway’s Supper Club.  The show directed by Ben Rimalower and musically helmed by Billy Stritch.

Fasten your seat belts for this show. it’s a happening.  The audience even gets in the act.  At the show we attended, Bravo’s Andy Cohen was given a microphone at his table, a waiter participated on stage, and The Countess sang, joked, and managed to “touch” everyone in the club.  It may be now named Feinstein’s/54 Below but it certainly had all the excitement of the original Studio 54 at The Countess’s show.   Appearing in last night’s episode were Murray Hill, Paulo Szot, Christina Bianco, Alexis Michelle, David Burnham, Marti Cummings, Julia Murney, and Kevin Smith Kirkwood, (along with a cast of 150 or so audience members).

The party continued after the show.

(Check out the Video) 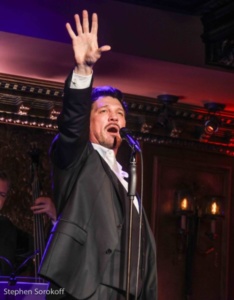 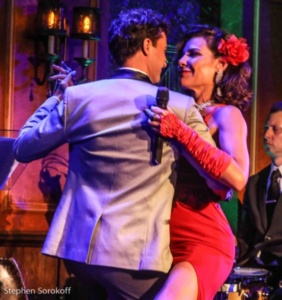 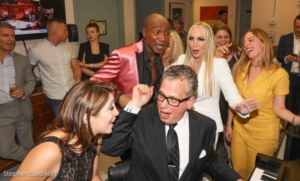