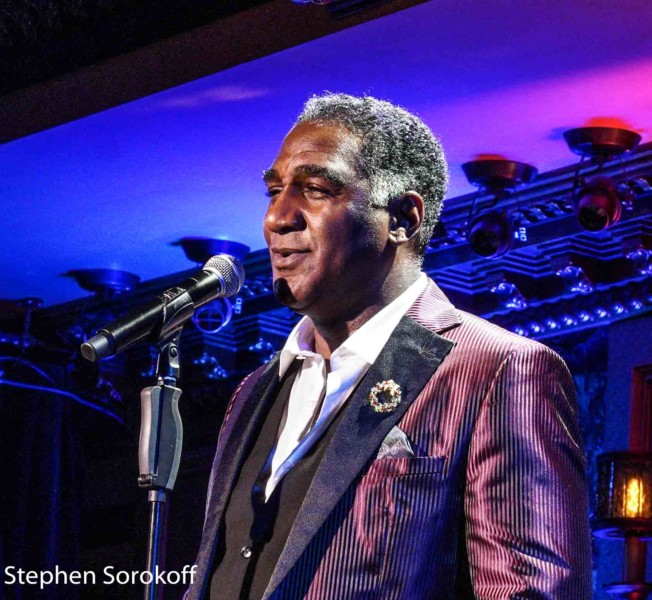 It is no accident that Norm Lewis is in his 7th year, as a holiday headliner

at FEINSTEIN’S 54 BELOW. He skipped a year due to the pandemic,

and filmed last year’s Christmas Special in the club, garnering an EMMY nomination,

but the man was back in full force Thursday night, playing to a crowd that couldn’t be happier

to see him and be in the presence of the magnetic star and that sterling voice.

Norm Lewis’s show is full of fun, frolic and solid musicianship. It is directed by

his longtime friend and collaborator, Richard Jay-Alexander, with musical direction

and arrangements by the equally gifted Joseph Joubert. The band is top-notch,

with Michael Olatuja on electric and acoustic bass and the very imaginative, “toy-carrying’

(as Norm told us) Perry Cavari, on percussion.

the audience, as song after song just illuminated and displayed the magical

gifts this actor/singer possesses. Whether it was the “opener” claiming he was “HOME”

or bringing new life to “SOMEWHERE” and even catching us up on a job he lost, doing

42nd Street for the Chicago Lyric Opera (and in Paris), which he “righted” by asking

for a volunteer, dressing them as Peggy Sawyer and doing the big number, to stop

her from going back to “Allentown.” Too many highlights to write about, but hearing

him soar through Maltby & Shire’s “STARTING HERE, STARTING NOW” was the greatest

gift he could have given us. Another emotional moment was when Norm called Richard Jay-Alexander

the pandemic (which we all acknowledged is not over yet). There wasn’t a dry eye in the house when

the two bonded to lead us to light, and into the future ahead with “GET HAPPY/HAPPY DAYS.”

Lewis has invited different guests on various nights of the run.

A house full of fans from all over the map were in the house, as were conductor, Steve

Reineke & husband Eric Gabbard and equally of note, Richard Weitz from WME with his daughter, Demi, both of

whom founded QUARANTUNES, during the pandemic. I must admit, it was also quite humbling to

get a shout out, from the stage, along with my wife, Eda. We are avid music lovers and attend many,

many shows, so it was truly a surprise and holiday blessing to receive in such a warm room.

This engagement is not to be missed and resumes Sunday night through December 24th (Christmas Eve).