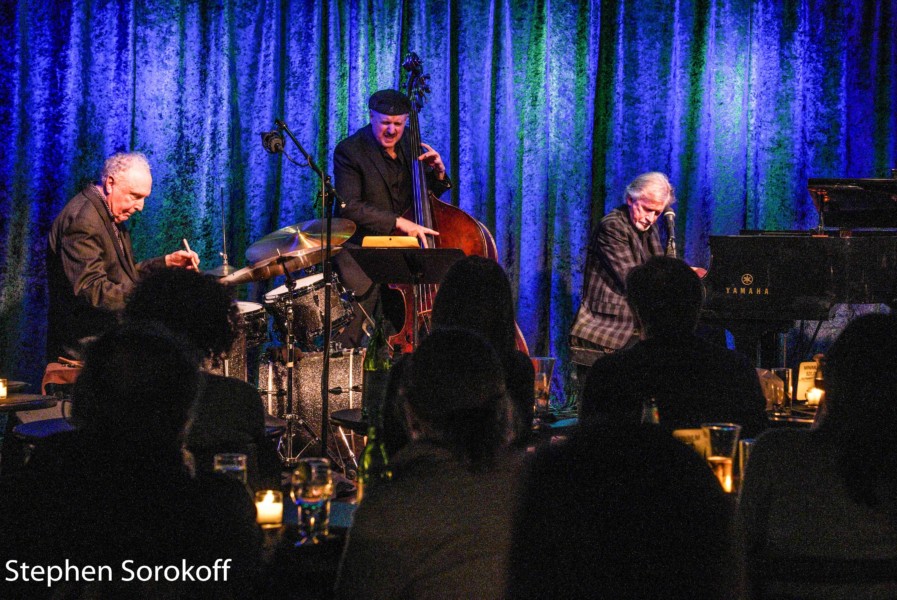 Sometimes advertising and catch phrases become outdated and are not reflective of the current environment.  Not so with “The Jazz Corner Of The World”.  Birdland is still the rightful possessor of that Charlie Parker quote, and one need have only been in the audience Saturday night to hear Jazz great Alan Broadbent and his trio to understand the legitimacy of that nickname.  Broadbent’s fingers produced melodic lines in a continuous elegant flow of notes that were breathtaking as he ranged over the keyboard like a ballet dancer.  The interplay between Harvie S on bass and Billy Mintz was a true love affair of great jazz musicians at their best.

“Trio in Motion” is the title of two time Grammy Award winning pianist Alan Broadbent’s latest album.  It’s release was celebrated last night at Birdland as Alan was joined by his long time collaborators Harvie S and Bill Mintz as they continued the tradition of the planet’s greatest musicians hanging  out on that hallowed corner of the world of jazz on 44th street in New York City.

Alan Broadbent’s career took off at the age of 19 when he received a Downbeat Magazine scholarship to attend Berklee College of Music in Boston. In 1969 he was asked to join Woody Herman’s band as his pianist and arranger for 3 years and was quickly invited into the studio scene as a pianist for the great Nelson Riddle, David Rose and Johnny Mandel. In the early 90s he was asked to be a part of Natalie Cole’s famous “Unforgettable” cd, at which time he toured as her pianist and conductor. At this time he wrote an orchestral arrangement for her second video with her dad, “When I Fall In Love”, which won him his first Grammy Award for “best orchestral arrangement accompanying a vocal”.

Shortly after, he became a member of Charlie Haden’s Quartet West, touring the festivals of Europe, UK and the USA. It was while with this group that he won his second Grammy, an orchestral accompaniment written for Shirley Horn of Leonard Bernstein’s “Lonely Town”.

As a soloist and with his jazz trio, Broadbent has been nominated for Grammys twice for best instrumental performance, in the company of such artists as Herbie Hancock, Sonny Rollins and Keith Jarrett. In 2007 he was awarded the New Zealand Order of Merit, an honor he holds in high regard.

Broadbent is Diana Krall’s conductor for her occasional orchestra concerts. Recently he has been the arranger on Glenn Frey’s cd with strings, “After Hours”, and wrote six string arrangements for Sir Paul McCartney’s “Kisses On The Bottom” with the London Symphony.

It has been his lifelong goal, through his orchestral arrangements and jazz improvisations, to discover, in popular music and standard songs, deeper feelings of communication and love.