There was a television show in the 1950’s called “What’s My Line”. The celebrity panelists had to guess what job a person did by asking them investigative questions.  I dare say if Gunhild Carling was a guest on that show her occupation would not have ascertained.  Who could imagine a musician that can play 20 instruments, sings, tap dances, is capable of physical frolicking  and is a master at all of them.  As she started her first number I began thinking is this a karaoke singer who had an extra drink before taking the Mic? but then quickly realized that Gunhild Carling is a superb jazz musician who’s technique is reminiscent of the 20’s 30’s hot swing style.  Her vocals have an amorous swing to them and it doesn’t hurt that Gunhild has a kind of nostalgic glamorous appearance that so fits her persona.   At one point in her show she had most of the audience following her around the Birdland Theater as she played The Saints Go Marching In.

The Great American Songbook is in good hands with this super talented Swede!

Her musicians only played one instrument each although Steve Doyle at one point seemed to be playing Guitar & Bass: Ron Abel, Piano, Daniel Glass, Drums. Billy Stritch was on the bench for some of her nights. 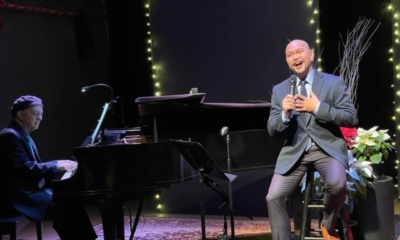