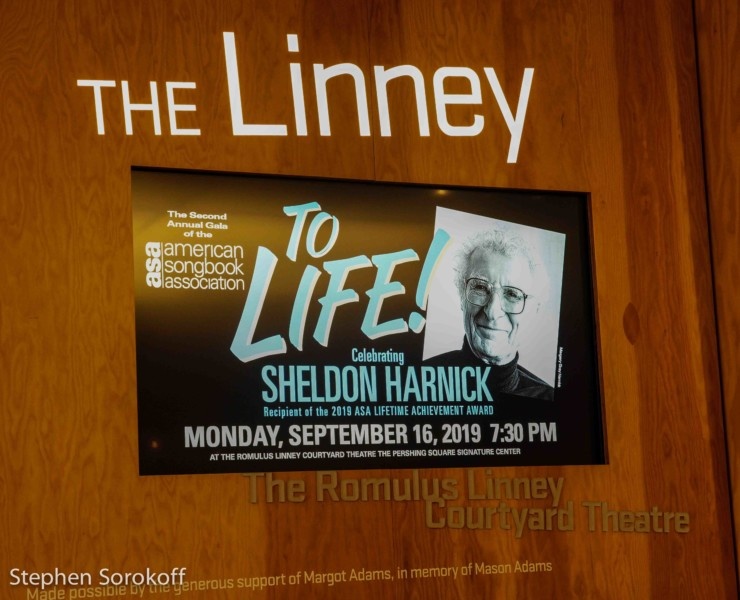 42nd Street, for over a century the place where so many momentous theatrical events have taken place was the scene of another one last night at the Pershing Square Signature Center.   Sheldon Harnick the legendary lyricist was celebrated in an evening presented by the American Songbook Association which featured a star studded musical tribute by some of Broadway and Cabaret’s most consummate performers.  Mr. Harnick received the American Songbook Association’s Lifetime Achievement Award.  Klea Blackhurst one of the most talented and witty performers in the business got the call to host the event and started the evening off with “Boston Beguine”  from Mr. Harnick’s  New Faces of 1952 which had music and lyrics by Sheldon Harnick.  In addition to hearing the words of Mr. Harnick sung by the remarkable cast  the audience heard the welcoming words of Marilyn Lester, Executive, Executive Director, Carolyn Montgomery, Director: Education and Outreach Program, and Board Member Craig Pomranz  who read a message from Mayor Bill de Blasio.  Deborah Grace Winer presented Mr. Harnick with the Lifetime Achievement Award.

This is the year of the huge success of the Harnick/Bock masterpiece Fiddler on The Roof in Yiddish and the American Songbook’s celebration was titled To Life!.  Steven Skybell, Tevye in the current production of Fiddler on the Roof in Yiddish brought the audience to it’s feet with his rendition of “Ven Ikh Bin Rothchild” Everyone got the message without the sub titles and the glorious evening ended with the Cast and audience joining in the traditional Jewish dance to Fiddlers, TO LIFE.

Complete Photos of this show on Broadwayworld.com