Jerry Herman lives a few miles away in Miami and had to cancel a surprise appearance last night but his glorious music and lyrics, sung by some of the best voices in show business filled the air in the City of Aventura.  Klea Blackhurst, Scott Coulter, Jason Graae, and Debbie Gravitte some of Broadway’s most acclaimed artist were the cast in “Jerry Herman, The Broadway Legacy Concert” produced by ASCAP’s Michael A. Kerker.  Jerry may not have given the audience a surprise Valentine’s Day visit but they will long remember Jason  Graae singing “I Won’t Send You Roses” from Mack & Mabel.

Scott Coulter gave a very authentic Shalom to the Florida audience and there probably wasn’t a dry eye in the house as the cast sang “Shalom” from “MIlk & Honey”.  Jerry Herman couldn’t write a bad song if he tried and some of his greatest tunes from Hello Dolly, La Cage Aux Folles, and Mame were in this show which was a superb tribute to one of the greatest  musical theatre composer/lyricists of all time.  “If your voice has I don’t want to go in it–say goodbye with a little hello in it–and say goodbye with Shalom.” 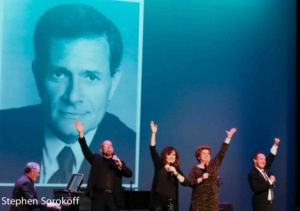