My View: Music Magic at The GreenRoom42 – Genies’ JukeBox

My View: Music Magic at The GreenRoom42 – Genies’ JukeBox

There was music and entertainment magic at The GreenRoom42 last night as program director Daniel Dunlow presented the world of The “Genies’ JukeBox” featuring the stars of Disney’s Aladdin.

Major Attaway, the current Genie, joined forces with the Genie Standbys, Juwan Crawley and Deonté L. Warren, in an eclectic trio show in which a Bass, a Mezzo, and a Tenor joined together on stage and the magic happened. These three talents brought together an assorted set of Disney classics, theater showstoppers and pop hits by Stevie Wonder, Whitney Houston and Luther Vandross. The show was directed by Daniel Dunlow, and featured music direction by Eric Fotre Leach.

The GreenRoom42 recently celebrated its year anniversary as the theater districts premiere destination for live music and events and the supper club with affordable prices, great menu, and cool way to call the friendly waitstaff, was packed with an overjoyed and enthusiastic room full of Genie, Aladdin and music lovers.

As the Genies pointed out at the beginning of the evening,the first requirements to become a  Genie is you have to shave your head and have to fit through that hole on the stage of Aladdin.

They forgot to mention that you also have to be a fantastic singer. The three Genies put on a killer show and the Yotel was rocking on 42nd street. 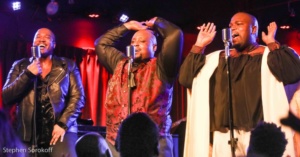 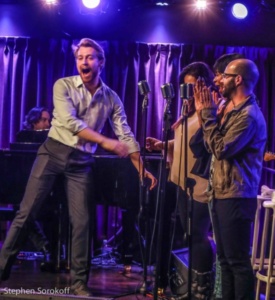 Suzanna BowlingNovember 22, 2021
Read More
Scroll for more
Tap
Talking With Bebe Neuwirth About Her Stories with Piano
Happy Days Are Here Again As Don Most Returns to The Iridium Stage