My View: Norm Lewis Had The Wrong Title To His Show

My View: Norm Lewis Had The Wrong Title To His Show

It should have said, Norm Lewis will give you a Thrilling Christmas. Yes, Norm can swing and he wished us a Swingin’ Christmas, but this man is so much more. Sometimes performers get eaten up by that attractive but busy backdrop and stage of Feinstein’s/54 Below. From the moment that this powerful handsome singer entered the room your eyes never left the view and your ears never heard anything else but Norm Lewis. It was a crowded room and more tables had to be added for the crowds flocking to see the first show, Michael Feinstein in his debut at the club, and then Mr. Lewis’s show. I might add that even though Michael is smaller in size (even joking he wished as a youngster to grow up and be like Alan Ladd – and did), Mr. Feinstein had the same effect on all present at his show.

The sound and range of Norm’s voice are a miracle of nature, and the smile on is face should be patented and sent around the world to make it a better place. I sat riveted with tears rolling down as he sang “Bring Him Home” from “Les Miserables”. Besides the great tunes on Norm’s song list he brought up a surprise guest. His friend and cousin Paster Bobby Lewis who happens to be an awesome singer, what a Christmas present! Pastor Lewis has a Church in Harlem and I can’t wait to check out the music from him and his ensemble in that venue.

Much credit to Richard Jay- Alexander who made sure the Lewis wonderful warm personality was prevalent throughout the evening. It was a very engaging, natural, uncomplicated fun Christmas show, and Norm made you feel that he was your best friend. All I want for Christmas is to be at a show like this next year. Pianist Joseph Joubert was at the 7 foot Steinway leading the trio. If you want to know about the great sounds he made all I can mention is that he’s the guy that orchestrated The Color Purple.

Norm Lewis Wishes You A Swingin’ Christmas at Feinstein’s/54 Below. Last Show tonight but here’s a present for you – a short video 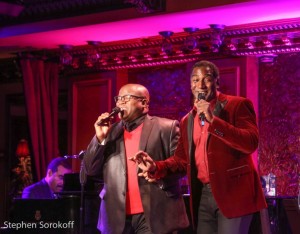 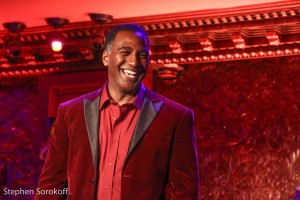 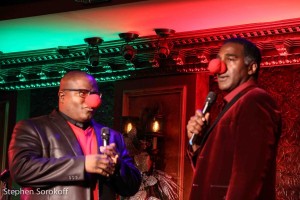 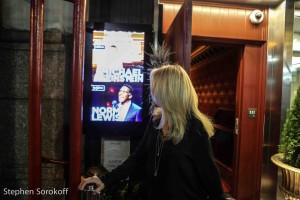