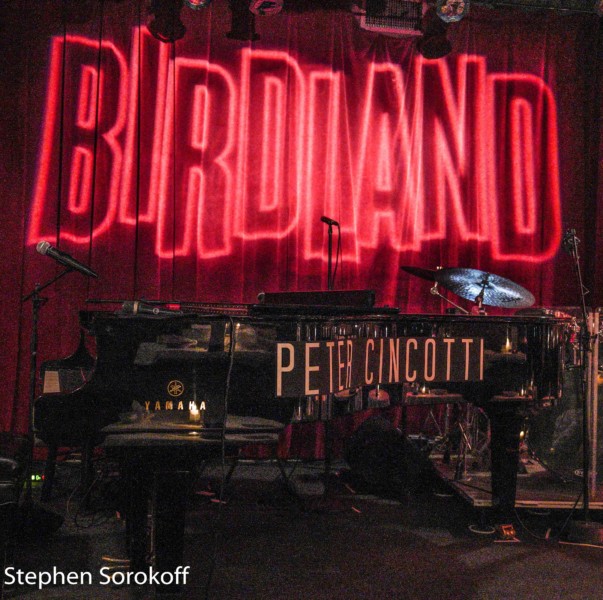 Peter Cincotti owned the piano in Birdland last night and it wasn’t because his name was temporarily affixed to the legendary 7 foot Yamaha for his engagement.   Imagine Billy Joel, Harry Connick Jr., Lang Lang, Manilow, and Jerry Lee Lewis on the same piano bench and it will give you an idea of the kind of exciting music at a Cincotti performance.  There is nothing better than that special bond and coordination a singer/pianist has.  The fingers know exactly how to wrap around the vocals and it becomes a magical seamless duet.  Peter is one of the best practitioners of this kind of music speciality.  With a good dose of original tunes to alternate with the standards and Peter’s dashing charisma it becomes quite an event and the Cincotti fans were lined up outside Birdland for it last night.

A born and bred New Yorker of Italian descent, Cincotti spent much of his childhood going to school during the day and playing clubs at night. Legendary music producer Phil Ramone was there one of those nights, a discovery that led Ramone to produce Peter’s debut album which reached #1 on the Billboard jazz charts, making 18-year old Cincotti the youngest artist ever to do so.

Since then, Peter has performed in some of the world’s most prestigious venues from Carnegie Hall to L’Olympia in Paris, collaborated with artists ranging from Andrea Bocelli to David Guetta, has been featured in blockbuster films such as Spiderman 2, represented the global fashion brands Ermenegildo Zegna and Tod’s, and just recently appeared as himself in Season 3 of the hit Netflix series House Of Cards. Along the way, his vibrant and socially-aware songwriting caught the ear of 16-time Grammy winner David Foster, who produced Cincotti’s third album East Of Angel Town yielding the song “Goodbye Philadelphia,” which became a smash hit overseas reaching the Top Ten on Pop Radio charts across Europe.