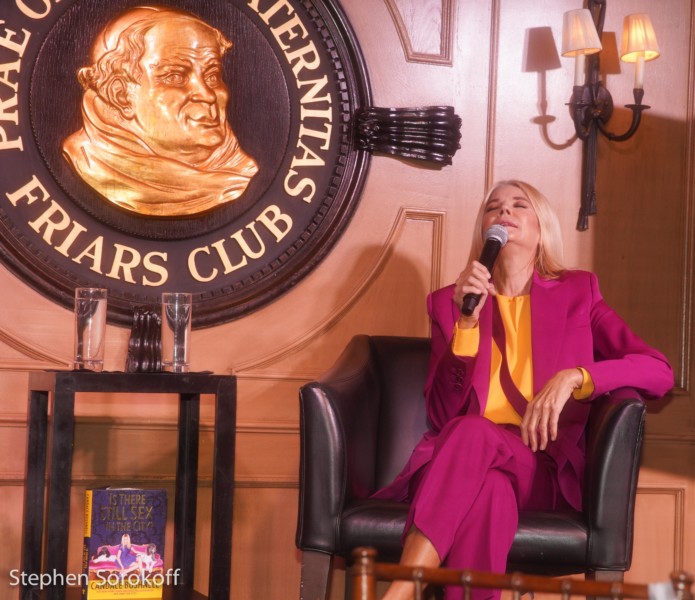 My View: Sex In The City – A Matinee at the Friars Club

My View: Sex In The City – A Matinee at the Friars Club

What happens in the Friars Club is supposed to stay within it’s walls but producer Jane Shevell couldn’t stop the leakers revealing the “perfect conversations” at her exciting “Lunch with Sex (in the city)” at the club this afternoon.  The Friars new lunch menu was lip-smacking hot and so was the testimony of Candace Bushnell of Sex in The City fame who was interviewed by Denise Richardson the co-host of The Pledge Drive on PBS.

Candace Bushnell is the critically acclaimed, international best-selling author of nine books, including Is There Still Sex in the City, Sex and the City, Summer and the City, The Carrie Diaries, One Fifth Avenue, Lipstick Jungle, Trading Up, Killing Monica and Four Blondes. Sex and the City, published in 1996, was the basis for the HBO hit series and two subsequent blockbuster movies. Lipstick Jungle became a popular television series on NBC, as did The Carrie Diaries on the CW. Is There Still Sex in the City is currently in development as a tv series with Paramount.Through her books and television series, Bushnell’s work has influenced and defined two generations of women. She is the winner of the 2006 Matrix Award for books (other winners include Joan Didion and Amy Tan), and a recipient of the Albert Einstein Spirit of Achievement Award. She currently divides her time between New York City and Sag Harbor, New York.

Producer and Friar Jane Shevell has created many stimulating events at the club but from my view, looking out at all the ladies in the club this afternoon this one had to be one of the most attractive and engaging afternoons